Warmest February on record in seven Michigan cities as well as major cities across U.S. 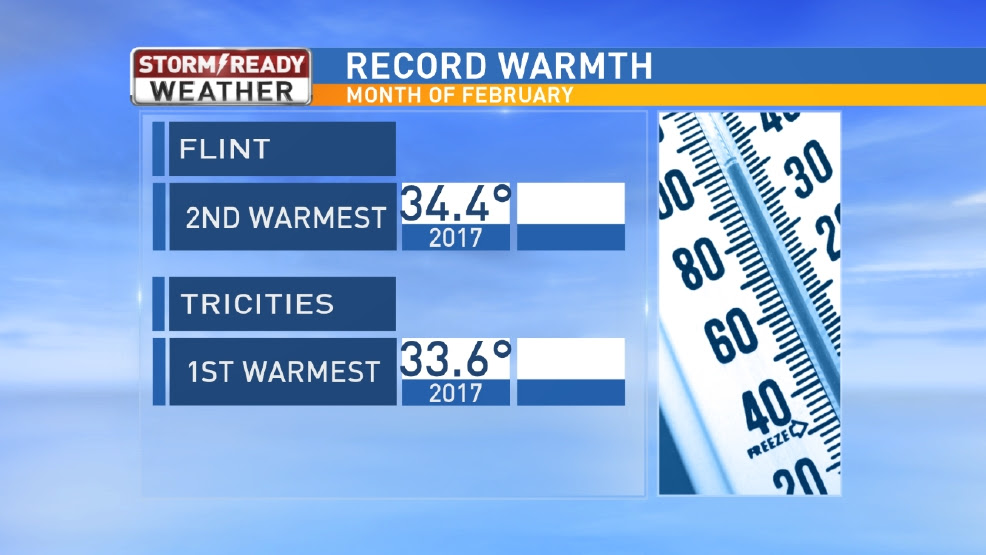 I mentioned that the weather was warming up, with near record temperatures expected a couple of weeks ago in Driving update for February 2017: Pearl.  Those record temperatures arrived and stuck around for most of the rest of the month.  The result, as MLive reported yesterday, was the warmest February in over 100 years of records in some Michigan cities.  Seven cities had their warmest February ever, Ann Arbor, Grand Rapids, Jackson, Kalamazoo, Lansing, Muskegon, and Saginaw/Bay City.  Three, Detroit, Flint, and Traverse City, had their second warmest February on record.  Eight of those records go back to 1998, which was a warm winter caused by an El Nino.  I remember playing soccer with my son in my former Ann Arbor home's snow-free back yard wearing only light jackets that year.  That last month was warmer than 1998 in seven Michigan cities strikes me as remarkable.  Only in Flint does the 1998 record still stand.

It was also the warmest February on record over much of the eastern part of the U.S., including Washington D.C., New York City, New Jersey, Philadelphia, Buffalo, Cleveland, and Baltimore.  The Washington Post story provided a startling perspective, reporting "The average temperature in D.C. last month was 8.7 degrees warmer than a normal February and nearly 1 degree warmer than a normal March."  Wow!

As for the local effects of the warm February, WOOD-TV reported on three tornadoes in SW Michigan Tuesday.

As the segment noted, these are only the second, third, and fourth tornadoes reported in Michigan during February.  And I thought Michigan being struck by tornadoes on the Ides of March five years ago was early!

The warm weather Michigan has been experiencing lately is threatening syrup production, shorting the season and cutting sweetness.

At least we're not having early warm weather followed by a cold snap that's bad for the fruit crop, except for wine grapes, not yet at least.  That could still happen.

Finally, WXYZ reminds viewers that An early spring may be bad for your health.