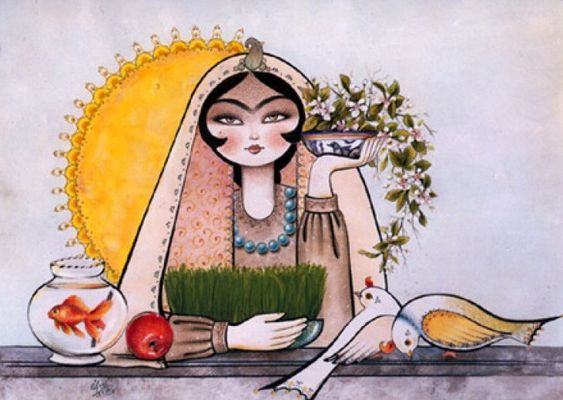 Nowruz Mubarak!  Happy Persian New Year to my readers, a happy 11th birthday to Twitter, and a happy sixth birthday to this blog!

I traditionally celebrate Nowruz by explaining the holiday and showing the White House's celebration.  The first one is easy: What is Nowruz How to celebrate Persian New Year.

What is Nowruz? How to celebrate Persian New Year
For nearly 190 million people around the world, Monday is one of the most important days of their calendar.
Nowruz - which means New Day in Farsi - marks the start of Spring.
Its origins are ancient - believed to have been started by Zoroastrians around 3000 years ago - but now it is an important part of modern lives.
But what exactly is Nowruz? BBC Persian's Sahar Zand visited Little Persia in London to explain how her family celebrate the Persian New Year.
Produced by Joe Inwood. BBC

The second one I am likely to discontinue after this year, as the current occupant of the White House is not a fan of multiculturalism and dislikes Iran.  However, I can benefit from conserving my resources last year by showing Nowruz at the White House with Silk Road Dance Company.

Historic White House Celebration of Nowruz with introduction by First Lady Michelle Obama and performances by Silk Road Dance Company of Washington DC, under the direction of Dr. Laurel Victoria Gray.  Founded in 1995, the ensemble has a repertoire of over 200 dances from Central Asia, the Caucasus, and the Middle East.

I'm going to miss celebrations of Nowruz at The White House.

Follow over the jump for two news reports about what passes for Twitter's birthday.

As for Twitter, Tech Crunch describes how the service will celebrate the 11th anniversary of the first tweet: Twitter launching Live video API tomorrow, which is now today.

Twitter is about to make it much easier for media publishers to post live video broadcasts with the launch of a live video API tomorrow morning. The API will let companies hook up professional broadcasting and video editing equipment to Twitter with more powerful integrations than Twitter’s existing Periscope Producer feature.

The forthcoming API was first reported last week by The Information. Now TechCrunch has learned the exact launch date is tomorrow morning and that Telestream, Wirecast, BrandLive and Livestream Switcher are amongst the API partners that will help publishers use the API.

As for Twitter making a profit, maybe the answer is no, as Investipedia asks Does Twitter as a Non-Profit Make Sense?

Embattled Twitter Inc. has been named as a potential takeover target, has faced calls to sell assets and now can add nonprofit to the list of ways it can improve itself.

Coming off a dismal fourth quarter when revenue growth was the slowest in its history and dealing with a declining user base and news that 45 million or more accounts may actually be bots, The Street.com made the case over the weekend as to why it may make sense for Twitter to morph into a nonprofit. After all, it does provide a service that helps the greater good: getting communications out to the world. Even President Donald Trump is an avid user, announcing policies and attacking his perceived enemies, all from that platform.

I've been calling Twitter the new Usenet for years and Usenet was never a money-maker, nor was it intended to be.   I based the analogy on how much Twitter resembled Usenet in its virtual Wild West character.  Looks like the analogy extends to the service's economics, too.

As for a celebration of this blog, stay tuned.  I'll have a statistics entry coming up, followed by retrospective posts about the past blogging year.