Bill Nye and I get our wish from Trump on Mars, sort of 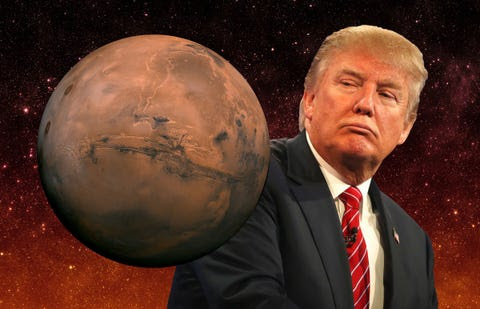 In last November's Trump pulls a Gingrich on space, I found a silver lining in the dark storm cloud of a Trump presidency, writing "space policy is the one area where Trump might actually be good for the country."  I also wrote of his campaign plank on space that "Trump's plan is actually not a bad idea."  I was not alone in my hopes.  Last week, The Planetary Society uploaded Bill Nye's Open Letter to President Donald Trump to its YouTube channel to urge him to do what the organization thought was necessary to achieve the goals of the plan and then some.

Bill Nye, CEO of The Planetary Society, and our Board of Directors present five recommendations to the Trump administration as it contemplates the future of the U.S. space program.

That was an increase from the $19.1 billion for NASA in the proposed budget Trump submitted last week, so that was an improvement, if not the 5% increase Nye was asking for.  As for me, I'm treating this the same way I did the Rusty-Patched Bumblebee finally being placed on the Endangered Species List, as a rare bit of good news coming out of this otherwise deplorable administration.

That written, I still stand by my conclusion from that entry in November.


Sorry, I want more ambitious goals for both space exploration and climate monitoring along with people who understand science and technology in charge of both.  This combination isn't good enough for me.  It's like hoping for the alternative history in "The Man in the High Castle" to happen just so there could be commercial SSTs by the early 1960s...The cost would be too high.

Funding for NASA research into climate change was still cut in the new bill.  That's not all.  Here's the cost, as depicted by Science Magazine, in terms of cuts to all kinds of federally funded research.

The cost is indeed too high.
Posted by Pinku-Sensei at 1:23 PM