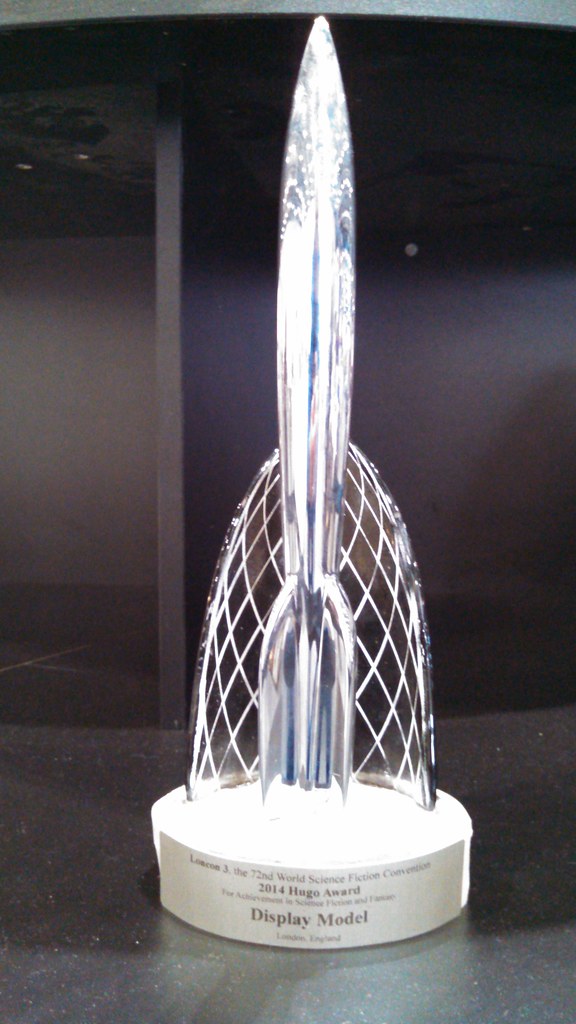 In yesterday's entry, I told my readers to "stay tuned for Sunday's entertainment feature, when I plan on writing about the Hugo Awards."  Since it's now Sunday, I'm sharing the media nominees from io9's Here Are the 2017 Hugo Awards Finalists, beginning with the movies and entire series.

Just looking at the nominees, I could tell that the Rabid Puppies had very little effect on the outcome.  Both "Ghostbusters" and "Hidden Figures," which feature female casts, are exactly the kind of works the Puppies slates attempted to keep out of the voting in previous years.  It turned out they were hardly trying.

Metafilter's post, Hugos 2017: a tale of puppies reported that the Sad Puppies didn't bother to make any recommendations and the Rabid Puppies, instead of full slates, which this year would have been three entries per category, only made one or two.  In the long form/"film" category, File 770's Measuring the Rabid Puppies Effect on the 2017 Hugo Ballot listed it as "Deadpool," which was a worthy nominee anyway.  In fact, all of them are acceptable nominees, although I'm surprised that "Ghostbusters" beat out the "Star Trek" movie or "Fantastic Beasts."  As for "Stranger Things" being here instead of an episode being nominated in the short form category, that's a pleasant surprise.  It really is the year for "Stranger Things," even though I think "Arrival" will win this category in a walk.

Game of Thrones: “Battle of the Bastards”, written by David Benioff and D. B. Weiss, directed by Miguel Sapochnik (HBO)

Game of Thrones: “The Door”, written by David Benioff and D. B. Weiss, directed by Jack Bender (HBO)

When I looked at this list, I first thought that "The Expanse" episode was the Puppies choice; it's their kind of show.  However, File 770 reported that it wasn't; a third episode of "Game of Thrones," "The Winds of Winter,"  was instead.  It earned enough votes to make the top six, but was disqualified because a series can only have two episodes nominated and "Game of Thrones" already had two in the top six, presumably with more votes.

The only entry I found surprising was "Splendor & Misery" by Clipping.  It's a music album, not a movie.  The commenters at Metafilter love the selection, but I have a hard time seeing it here instead of an episode of "Westworld" such as "The Bicameral Mind."  In my opinion, that was the best episode of the best science fiction show on television last year and I have a hard time seeing it not recognized, which the Science Fiction Writers of America did.  From The Verge, here are this year's Nebula Award nominees for dramatic presentation.

"Westworld" was the only television series recognized by the writers, but the fans didn't even bother to nominate it.  Time to start hyping it for the Saturn Awards.
Posted by Pinku-Sensei at 9:20 AM