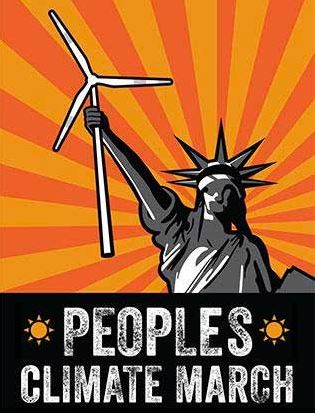 Lately, it's become another Saturday, another protest by the Resistance.  Two weeks ago, it was the Tax March.  Last Saturday, which was also Earth Day, it was the March for Science.  Today, it's the People's Climate Movement's March for Climate, Jobs, and Justice.

The last People's Climate March was held on September 21, 2014, an event I mentioned in passing as part of the context for Climate and environment news from Colorado State University.  That event was in response to the U.N. Climate Summit in New York City two days later.  If anything, it was in support of the official event being productive, not a protest against it.  In a way, it worked, as the Paris Agreement on Climate was signed on Earth Day two years later.  That was good news that I celebrated in Climate change for the sixth year of Crazy Eddie's Motie News.

Today's event is much more obviously one of resistance and opposition.  Just look at these three videos promoting it, beginning with 350.org's Peoples Climate March: We resist. We build. We rise.


Even the relatively staid Sierra Club takes a militant tone in its Peoples Climate March: Be Heard on Climate, Jobs and Justice.

Join the Peoples Climate March as we march for climate, jobs and justice in Washington, D.C. on April 29! If you can't make it to D.C., find a Sister March near you.

Tom Steyer of NextGen Climate is even more explicitly anti-Trump, if that's possible, in Why We March.

On April 29th, we're fighting back against Trump's polluter-friendly agenda. Join me and thousands of others across the country for the People's Climate March and stand up for our climate.

According to the People's Climate Movement, there is no event in Ann Arbor today.  Instead, the nearest one is in Ferndale, location of the Green Cruise.  I've said over and over again that I'd participate in that, but never have.  I think I'm going to show up today for the Ferndale Climate March.  If I do, I can thank Trump for motivating me.  Also, I might just report on it next week.  Stay tuned for that, after the last post of the month, which will be a Sunday entertainment feature, and the first post of next month, which will be on May Day.
Posted by Pinku-Sensei at 12:00 AM