Unicorn drinks and music for my readers' Sunday entertainment 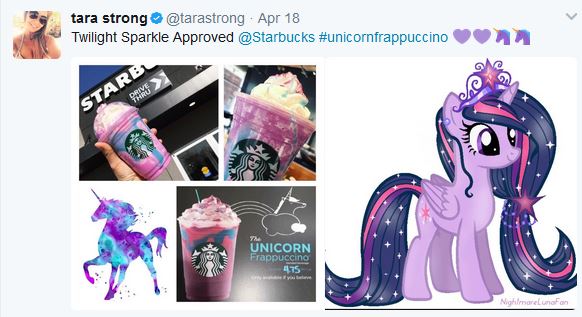 Thanks to Kevin Robbins of Hometown, U.S.A., unicorns had a cameo in the comments to Trump's border wall is an environmental disaster, too, when he wrote "It's looking like the chances of the wall being built are about the same as unicorns making a comeback."

I changed the subject slightly with "Well, there are unicorn frappuccinos at Starbucks, but you're right. They aren't real unicorns."

Kevin played along.  "I saw a story about those. Baristas are distinctly not happy happy joy joy about making them."

We weren't kidding.  Business Insider reported Exhausted Starbucks baristas 'hate' the complicated-to-make unicorn drink that's taking over Instagram.  The article shows that making the drink is a lot of work, just as I gathered.  As for the customer reaction, The Capital Times on Madison.com headline read Yeah, I Ate That: The Unicorn Frappuccino is made for Instagram, not taste buds and said of the reaction, "It’s a lot of fuss over a drink that looks like a My Little Pony fell in a tank of battery acid. In fact, one can’t help but wonder if the Unicorn Frappuccino was ever meant to be consumed, but rather photographed, posted on Instagram and then tossed away."  ZING!

As George Takei would say, "Oh my."

That's not all.  Stephen Colbert had even more to say in Stephen Hate-Tastes Starbucks' Unicorn Frappuccino.

In the perfect world, unicorns would exist and Starbucks' unicorn frappuccinos would cease to.

Sorry, but this is not a perfect world.

Follow over the jump for more recycled comments along with the recipe for another unicorn drink recipe and some appropriate music.

I wasn't finished discussing unicorn drinks.  I finished my final comment with with "Honestly, the Unicorn Shots from Tipsy Bartender sound like they taste better and they have booze."  Here's the video and recipe.

At least those will be as sweet as they look.

Finally, Infidel 753 dropped by Entertainment for the sixth year of Crazy Eddie's Motie News to make it the most commented on entry of April.  Among his other observations and reactions, he wrote that "I did like the harp twins."  My response was "I'm glad you like the Harp Twins."  Since we both like them, it pleases me that they have just the performance for tonight's entry: MY LITTLE PONY medley (Harp Twins) Camille and Kennerly.

"My Little Pony Theme Song" and “Winter Wrap Up” from My Little Pony: Friendship is Magic, Composed by Daniel Ingram.

That looks like the perfect music to drink either the Unicorn Frappuccino or Unicorn Shots by.

This wraps up April, but it doesn't finish the entertainment posts for this week.  Tomorrow is May Day.  I'm planning on another drum corps themed post, this time involving fake trees for the maypoles.  Thursday is Star Wars Day, Friday is Cinco De Mayo, and Saturday is Revenge of the Sixth.  I doubt I'll have much time for DOOM this week.
Posted by Pinku-Sensei at 8:00 PM