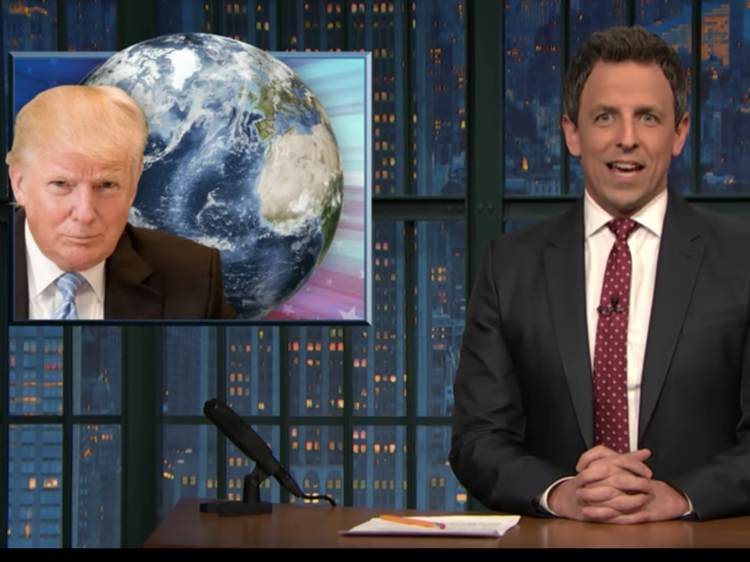 As I wrote twice in Gerrymandering and other general politics for the sixth year of Crazy Eddie's Motie News, the subject of today's retrospective is climate change.  Like holidays, climate change is a recurring subject of retrospectives on this blog going back to its very first year.  It's good to know some things don't change.

The twelfth most read entry of the previous blogging year was Seth Meyers takes a closer look at Trump and climate change from December 22, 2016 with 2964 page views according to the raw counter as of March 20, 2017.  While it was posted in December, it was the most read entry of January 2017 after being shared at the Coffee Party USA Facebook page, ending the month with 2631 page views, 2925 according to the raw counter.  While it rose quickly, it showed no signs of making the all-time top ten, so I didn't put in a lot of effort tracking its progress.  Besides, I think I was on vacation at the time I shared the post, so I had better things to do.

Follow over the jump for more of last year's top posts on climate.

The twenty-seventh most read entry last year was Paris Agreement on Climate being signed on Earth Day from April 22, 2016 with 1531 page views according to the raw counter as of March 20, 2017.  Monthly meta for April 2016 told its story.


"Paris Agreement on Climate being signed on Earth Day" posted on Earth Day, April 22, 2016 came in third in three categories--third of the five entries promoted at the Coffee Party Facebook page, third among entries posted in April, and third overall for the month.  The entry helped attract 1429 page views to the blog on April 22nd and 23rd and ended the month with 1310 page views, 1317 according to the raw counter.

I was optimistic when I shared the link on Facebook, but less so when I included it in a comment on The Dawn of the Cthulhucene: A Retrospective at The Archdruid Report, where I wrote "We are not going to save the planet.  If we're lucky and careful, the planet might save us--for a while."  That gloomy take on the action helped earn the post another hundred page views.

The thirty-six most read entry of last year was July 2016 hottest month on record yet from August 17, 2016 with 1098 page views according to the raw counter.  Best August so far and other monthly meta told its story, so I'll be a good environmentalist and recycle.


"July 2016 hottest month on record yet" from August 17, 2016.  It earned most of its 959 page views, 974 according to the raw counter, from being shared at the Coffee Party Facebook page.  It got 800 page views in the first 24 hours after being shared, 386 of them in the first hour. That helped attracte 401 page views to blog in first hour after being shared, 1060 the first day.  In contrast, it only earned 79 all day before from being shared at the environmental groups and communities on social media.  Infidel 753 later linked to it.  As a result, it was not only first for posts from August, but also 3rd overall for the month, although it jumped up to 2nd on the last day.

July's record was tied the next month, as it was the warmest August on record so far as carbon dioxide passed 400 ppm "permanently."

That's it for the top climate posts of the last blogging year.  Stay tuned for a retrospective about the rest of last year's top election entries.