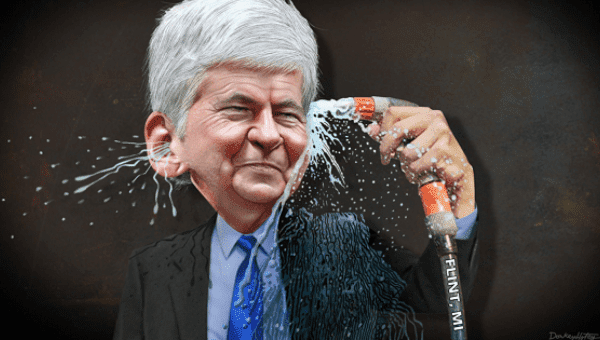 I concluded Entertainment for the sixth year of Crazy Eddie's Motie News by writing "The next retrospective will be about the Flint Water Crisis, which had two posts in the top forty, one of which was briefly on the all-time top ten.  Stay tuned."  I'm not waiting until Throwback Thursday or Flashback Friday to post it; today is as good a day as any to finish the recounting of the forty most read entries of the blogging year finished just last month.  I summarized the rise of both entries in Monthly meta for April 2016, so I'm going to be a good environmentalist and recycle the stories for each in turn.

The twenty-ninth most read entry of the past year was Slow drip of Flint Water Crisis erodes Rick Snyder's approval from April 7, 2016 with 1509 raw page views on March 20, 2017.  That an entry that ranked so low at the end of the blogging year, however briefly, was in the all-time top ten, became one of the main reasons why I recapped the top forty instead of the top twenty.  Here's the tale of its rise and fall.


"Slow drip of Flint Water Crisis erodes Rick Snyder's approval" from April 7, 2016 earned a series of accolades.  It came in second among entries shared at the Coffee Party's Facebook page, second for April entries, second for the month overall, and tied for first in comments on entries posted during April with four comments (Thanks Paul W. and Les, who apparently came via the Coffee Party).  I also shared it at Greer's and Kunstler's blogs.  All that earned it 1416 page views, 1434 according to the raw counter, attracting 1639 page views on April 8th and 9th, and placed it tenth on the all-time list, kicking out "Doctors to Congress: Fund gun violence research at the CDC and NIH."  It only lasted ten days there.  Sic transit gloria mundi.

John Oliver and FiveThirtyEight on Tax Day knocked this entry out of the top ten after only ten days, a story I told in John Oliver: Top posts for the sixth year of Crazy Eddie's Motie News.

Follow over the jump for the other entry about Flint that made the year's top forty.

Congressional inquiries, emails, and lawsuits in the Flint Water Crisis this week" from April 8, 2016 ended the year with 1118 page views according to the raw counter, enough to place it thirty-fifth overall last year.


"Congressional inquiries, emails, and lawsuits in the Flint Water Crisis this week" from April 8, 2016 came in fourth out of five entries promoted at the Coffee Party's Facebook page last month.  It helped attract 1345 page views to the blog on April 9th through 10th.  I also shared the link at Greer's and Kunstler's blogs.  As a result, the post earned 1039 page views, 1052 according to the raw counter, to land in fourth place both among entries posted during April and overall for the month.

Here's what I wrote about both entries in the comments to The Mystery Revealed at Kunstler's blog.


[T]here are some rackets that have finally been exposed and the people are clamoring for them to end.  Here in Michigan, it's the Emergency Manager Law, the blowback from which has resulted in Congressional inquiries and lawsuits along with eroded approval ratings for Governor  Rick Snyder.  That last is the least of the state's problems, but it seems people are enjoying the Schadenfreude.

I wrote something similar in a comment to American Narratives: The Rescue Game at Greer's blog.


"The Rescue Game...Here’s how it works. Each group of players is assigned one of three roles: Victim, Persecutor, or Rescuer."

I know this by a different name, Karpman's Triangle AKA the Dreaded Drama Triangle.  In this version, the roles are self-chosen and the participants are engaging in these behaviors not to fill some greater social need, but to manage their own psychological needs, especially their anxieties, in a way that allows the participants to ignore the dysfunction and harm done to others.  The Persecutors get to be "one up" and say to the Victims "It's all your fault."  Unlike the version you describe, there are actual benefits to being in this role other than negative attention.  In both versions, the Victims get to say "poor me" to themselves and seek sympathy from the Rescuers, who says "poor you" to the Victims.  However, the Drama Triangle acknowledges that the Victims can be engaging in self-destructive behaviors and the Rescuers end up enabling the Victims and keeping them dependent.  The result is very unhealthy for all involved, as it just keeps the conflict going without achieving solutions.  On a personal level, we should all try to break out of these roles for more constructive ways of dealing with each other and our environments.  A healthy society should strive to get out of the game, too.  However, as you've been pointing out for ten years (next month will be the tenth anniversary of your first post on this blog), we do not live in a healthy society.

I can see the Dreaded Drama Triangle playing out here in Michigan.  A task force on the Flint Water Crisis reported their findings last month.  Did the actual solutions get people's attention?  No.  What really made them notice was the opportunity to use the crisis to play Victim, Persecutor, or Rescuer through holding Congressional inquiries and filing lawsuits along with ridiculing Governor Rick Snyder.  That last is the least of the state's problems, but it seems people are enjoying the Schadenfreude.

I think these are the only entries in the top forty where I can find evidence that I promoted them at both doomer blogs.  It's not a coincidence that they are among the earliest posted, lowest ranking, and last reviewed.  To repeat what I wrote in Statistics for the sixth year of Crazy Eddie's Motie News.


On the other hand, I am sharing fewer links at Greer's and Kunstler's blogs.  Since October, I've been leaving one or two comments per month total at each blog instead of four or five a year ago.  They are likely to remain minor sources of page views, as Greer has ceased blogging at The Archdruid Report, while I'm more disenchanted with Kunstler all the time, even though he's blogging twice a week now.  I'd rather not be seen with his commenters on a frequent basis.

He posted today.  Will I be commenting?  I'm not planning on it.  Maybe next Monday, which will be May Day.  Other than that, silence at his blog.

My coverage of the Flint Water Crisis began before last year.  The eleventh most read entry of the blogging year before last was Michigan Attorney General launches investigation into Flint water crisis from January 26, 2016, the story of which I recounted in Republicans in the news for the fifth year of Crazy Eddie's Motie News.  It also continues into this year, as Flint water lawsuit settled for a late celebration of World Water Day from March 31, 2017 is currently the second most read entry posted this blogging year with 2075 default and 2158 raw page views, but that's a story for one of next year's retrospectives.

That concludes the retrospectives of the forty most read entries posted during the past blogging year.  The next one planned should be about the entries with the most comments and likes and shares on social media.  Stay tuned.