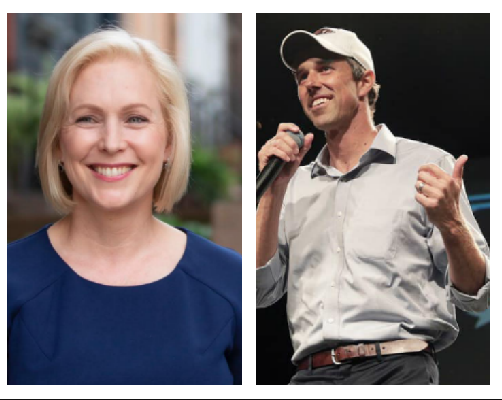 The presidential hopefuls are bringing their messages to Michigan voters.

As I type this, O'Rourke has wrapped up his visit to Hometown Heroes Cafe in Center Line and has moved to Carpenter's Training Center in Ferndale.  I watched MSNBC cover him in Center Line, so he is getting national attention after raising a record $6.1 million in the first 24 hours after declaring his candidacy, beating Bernie Sanders by $0.2 million.  Wow!

Speaking of MSNBC, Gillibrand is taping a segment for tonight's All In with Chris Hayes later this morning, then appearing with Governor Gretchen Whitmer in Clawson this afternoon.  Normally, I'd wish the senator good luck as one of the women running for U.S. President, but my wife and I are still annoyed by her role in the resignation of Al Franken.  On the one hand, he probably needed to go, but only after the Senate Ethics Committee had finished its hearings.  On the other, the rush to get him to resign messed with Americans', particularly progressives', entertainment, which riles Americans and does not go well in politics.  I'm not alone in thinking that.  Politico reported last November that a lot of big Democratic donors won't contribute to Gillibrand because of her actions in the Franken scandal.

Enough of my rant about Gillibrand and Franken.  I might follow up on the visits tomorrow.  Stay tuned.
Posted by Pinku-Sensei at 10:25 AM