Charlotte Russe liquidating, a tale of the Retail Apocalypse 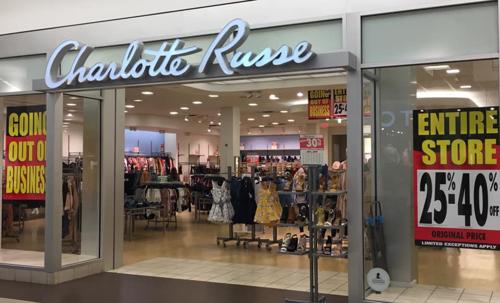 
CNN has the details in Charlotte Russe will liquidate and close all of its stores.

Charlotte Russe will close all of its stores over the next two months. The women's clothing company joins a growing group of retailers that couldn't survive bankruptcy.

The company didn't want to shut down. It filed for bankruptcy protection a month ago and announced plans to close only 94 of its 512 stores nationwide. The goal was to use the bankruptcy process to shed debts and sell to a buyer who would keep it in business.

But those hopes fell apart this week when liquidator SB360 Capital Partners won the auction in bankruptcy court for Charlotte Russe's $160 million worth of inventory, and other assets. The plan to shut down was approved Wednesday by the bankruptcy court in Delaware.

“We are partnering with SB360 Capital to liquidate the remaining inventory in a manner which maximizes the return to our creditors," the fashion retailer said in a statement to USA TODAY. "In addition, we remain in ongoing negotiations to sell the (intellectual property) to a buyer who has expressed interest in a continued brick and mortar presence.”

In other words, just like Twinkies, the name will live on under new ownership; it's too valuable to die.

CNN has more on the fallout for employees.

Charlotte Russe had 8,700 employees at the time of the filing, all but 1,400 of whom were part-time workers. It had stores in every US state except Alaska at the time of its bankruptcy filing. It also owned 10 children's clothing stores under the Peek brand, which it acquired in 2016.

Meanwhile, $559,000 in bonuses will be paid to executives, but rank-and-file employees will likely not receive severance, which is typical in bankruptcies.

In the entry about Tesla, I also wrote "It also looks like 2019 will see even more stores close than last year," so I expect to write more about the Retail Apocalypse.  An entry about Dollar General or The Gap will have to wait until after I revisit Radio Shack, as Bright Sun Films just uploaded an episode about the defunct chain.  Stay tuned.
Posted by Pinku-Sensei at 10:34 AM