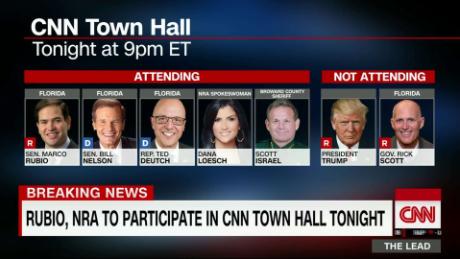 I concluded 'Meet The Press' earns a Cronkite Award for its coverage of climate change by telling my readers "I'm not done with the Cronkite Awards.  Stay tuned for more winners tomorrow."  Today's featured winner is the CNN Parkland Town Hall.  Here is the description from the University of Southern California Annenberg School for Communication and Journalism.

CNN Parkland Town Hall, a two-hour special, aired only seven days after 17 students and teachers were murdered by a gunman at Marjory Stoneman Douglas High School. In this “compelling and powerful” forum, moderator Jake Tapper deftly gave generous space to speak to gun control advocates, politicians, Parkland students, parents and a representative from the NRA. The program helped “advance the national conversation on gun control and violence,” the jury said.

Here is the entire CNN town hall in wake of Florida school shooting.

Last year, there were 14 nominations for 12 reports about Las Vegas Massacre and other mass shootings at the News and Documentary Emmy Awards.  Parkland was not among them.  I suspect coverage of it will earn a lot of nominations at this year's ceremony.  This particular program might earn nominations for Outstanding News Discussion & Analysis and Outstanding News Special, although, as I wrote yesterday, "I am not going to hold my breath.  It's a long time until the end of July, when the nominees are announced, and the competition will be stiff."

I might have more about the Cronkite Award winners next month as well.  In the meantime, stay tuned for a retrospective entry about Facebook knows your political affiliation and much more, the top post of the eighth year of the blog for Throwback Thursday and another retrospective about the most read retrospectives for Flashback Friday (how recursive!), followed by this year's celebration of Earth Hour.
Posted by Pinku-Sensei at 12:59 AM