I told my readers "I'll keep following the story to see who replaces Cheney. I think it will likely be Elise Stefanik, but stay tuned to find out" at the end of House Republicans vote to remove Liz Cheney as conference chair. Sure enough, that happened. CBS News reported House GOP votes Representative Elise Stefanik into leadership.

House Republicans elected Representative Elise Stefanik of New York as the party's new conference chair Friday. The decision came after Representative Liz Cheney of Wyoming was ousted from the position earlier this week. CBSN Washington reporter Caitlin Huey-Burns joined CBSN to discuss what the move means for the GOP.

I'm going to be a good environmentalist by recycling my remarks about the significance of this swap from Colbert and Meyers take closer looks at replacing Liz Cheney and Arizona audit.

That Elise Stefanik has become the leading candidate to replace Cheney strikes me as ironic if one considers this intra-party conflict is over conservatism. Voteview rates Stefanik's ideological score at 0.229, more liberal than 98% of House Republicans in the 117th Congress, while Cheney's ideological score is 0.515, exactly in the middle of the current House Republican Caucus. Replacing a mainstream conservative Republican with an ideological moderate shows this fight is not over conventional ideas of left and right. Instead, it is about loyalty to Trump, which is odd considering that major American political parties generally move away from losing presidential candidates. Not now — the GOP is sticking closer to Trump than ever.

Shifting gears from serious to silly, The Daily Show with Trevor Noah discussed the irony of replacing a conservative who no longer supports Trump with a moderate who now does in GOP Ousts Liz Cheney and Promotes Elise Stefanik.

Rep. Liz Cheney gets voted out as the House Republican Conference chair. Here’s how her replacement, Rep. Elise Stefanik, got to where she is.

Stefanik strikes me as an opportunist who felt the wind shifting and turned like a weather vane. On the one hand, she's being responsive to her constituents, which is generally a good thing in a legislator. On the other, she shows that she's following instead of leading by telling them when they're wrong. Still, it's working for her so far. Let's see how long that lasts.

I want to thank three of my fellow bloggers for calling my attention to Stefanik. The first is Kevin Robbins of Hometown USA, who lives in her district and criticizes her regularly on his blog. Hey, Kevin, what do you think of this news?

The second is Nonnie9999 of Hysterical Raisins, who came up with the name I use for Stefanik's label. Her most recent parody poster is Cheney Leaves the House of Twitler, showing Stefanik and Kevin McCarthy throwing Liz Cheney out of the House. 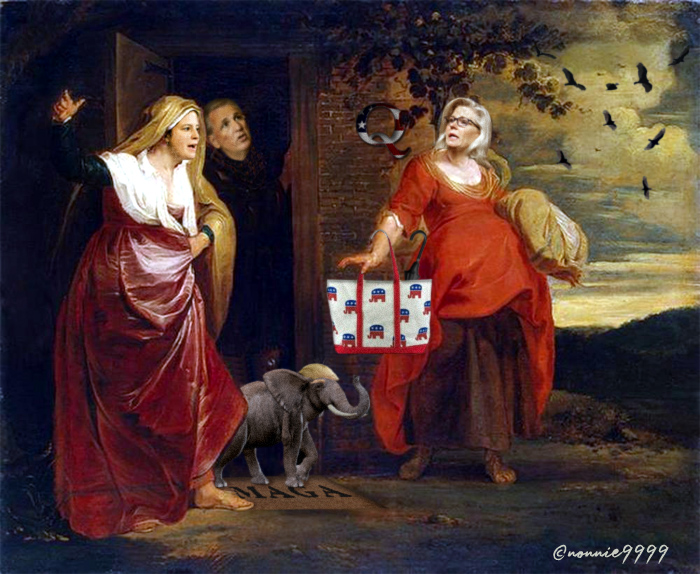 That's not the poster where she gave Stefanik her nickname. This is.

A third blogger, Infidel753, caught the nickname and praised it in a comment, writing "'The Little Slurmaid' is the best part of this. That deserves to become a permanent nickname." It is now, at least here, along with "Pickled Tongue" for McCarthy, who now has his own label. He's earned it.
Posted by Pinku-Sensei at 11:40 AM