Catalytic converters are not the only component of cars to experience a shortage as America recovers from COVID-19; computer chips are, too. I might write about them, as silicon being an important element in auto manufacturing is another story I tell my students. Stay tuned.

CNBC has covered that topic, too. I begin with Why Tiny Microchips Are Crippling The Global Auto Industry And Driving Up Prices from earlier this month.

While the automotive industry was ravaged early on in the pandemic thanks to lockdown measures and a dramatic decrease in travel, it more recently has begun facing a new problem: a shortage of microchips. Microchips are vital to much of a vehicle’s key functions, such as engine control, transmission, infotainment systems, and more.

In the last half of 2020 and now in 2021, vehicle sales recovered fairly quickly, faster than automakers anticipated. Suddenly, they were struggling to meet demand. At the same time, chipmakers were experiencing supply shortages and increased demand from other sectors, such as personal electronics.

With the resulting lack of microchip supply, automakers have been forced to slow production, even on their most popular models. For several automakers, the shortage is expected to cost them $1 billion or more — and even still, the alternatives are worryingly few.

Calculated Risk displayed the crash and rebound of auto sales in April Vehicles Sales increased to 18.51 Million SAAR; Highest Since 2005. 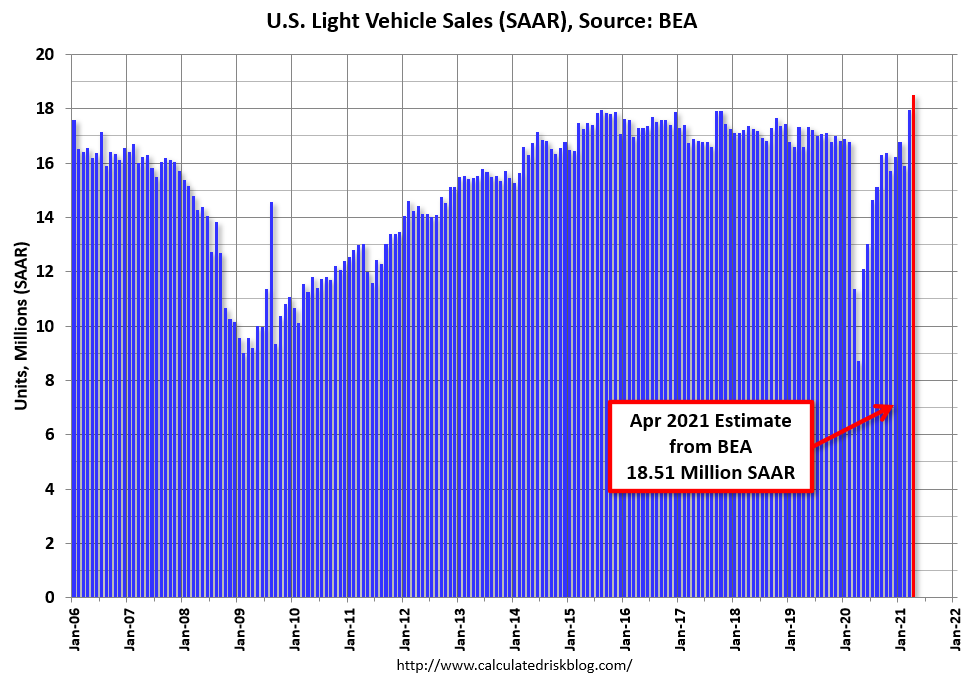 It's easy to see the effect of the pandemic on sales followed by a rapid recovery as lockdowns eased. Still, the shock was enough to break and reforge the links in the microchip supply chain, which CNBC had earlier explained in February's How The Global Computer Chip Shortage Happened.

It’s not an overstatement to say that semiconductors power the modern world. They’re not only a key component of nearly every electronic device we buy and use — they also power the factories that make the electronic devices we buy and use. And now, there aren’t enough of them getting made. Here’s how the global semiconductor chip shortage got so bad, and what’s being done to fix it.

A chip shortage that started as consumers stocked up on personal computers and other electronics during the Covid-19 pandemic now threatens to snarl car production around the world.

GM said that it would extend production cuts in the U.S., Canada, and Mexico until the middle of March. They join a long list of major automakers, including Ford, Honda and Fiat Chrysler, which have warned investors or slowed vehicle production because of the chip shortage.

But it’s not just the automotive industry that’s struggling to get enough semiconductors to build their products. AMD and Qualcomm, which sell chips to most of the top electronics firms, have noted the shortage in recent weeks. Sony blamed the chip shortage for why it’s so hard to get a PlayStation 5 game console.

Chips are likely to remain in short supply in coming months as demand remains higher than ever. The Semiconductor Industry Association said in December that global chip sales would grow 8.4% in 2021 from 2020's total of $433 billion. That’s up from 5.1% growth between 2019 and 2020 -- a notable jump, given how large the absolute numbers are.

Semiconductors are in short supply because of strong demand for electronics, shifting business models in the semiconductor world that created a bottleneck among outsourced chip factories, and effects from the U.S. trade war with China that started under former President Trump.

Ugh, the U.S.-China trade war. I wrote about how it might accelerate the Retail Apocalypse, restrict U.S. access to Chinese rare earths, reduce GDP and increase inflation, trigger a recession, threatened Family Dollar, and cause Dollar Tree to increase prices, but I didn't expect it would show up in this story, yet here it is. This entire story serves as another example of everything is connected to everything else and there is no free lunch; mess with some part of a system and the effects will move through all the connections at rates and sizes ranging from ripples to cascades. In this case, it looked more like a cascade.

Follow over the jump for two videos from CNBC Television reporting on one effort the U.S. government is making to stabilize the microchip supply chain.

In case Gina Raimondo looks familiar, I included her in On The Issues' take on Democratic Vice-Presidential contenders from left to center. Then, she was Governor of Rhode Island. Now, she's Commerce Secretary. As "I've worked for the federal government three times, and each time I either worked directly for the Department of Commerce or for another agency where Commerce provided the funding," that means I have a particular interest in her department.

The private-public partnership would probably not solve the current crisis, but it will likely help prevent or ameliorate the next one. This won't be the last pandemic or other shock to supply chains.

I might look at this issue from the perspective of local news media next. Stay tuned.
Posted by Pinku-Sensei at 7:01 PM