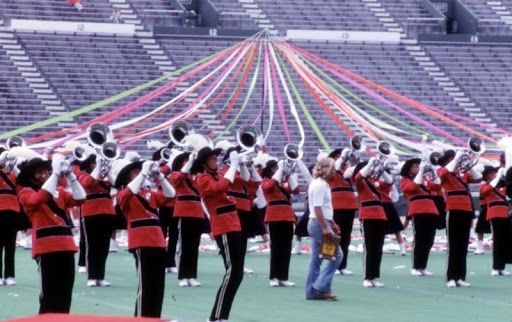 A happy drum corps May Day to my readers! Last year, I found something I had long been looking for, but worried about what I would post this year.

High-Stepper uploaded Top 100 Highest Rated DCI Shows #10: Santa Clara Vanguard 1978. It shows the maypole being put away during "If You Believe" instead of the full dance during concert, but at least it's a drum corps maypole in motion.
...
That's as close to the "idea I've been avoiding for...year[s], the socialist meaning of May Day" as I wish to come today. Thanks to High-Stepper for helping me not have to go any closer to it this year. Next year may be another story.

Fortunately for me, High-Stepper also uploaded clips from 1979, which also featured the guard dancing around the maypole, so I got the clip I've wanted since the year I began this series. It only took seven years. Watch Top 100 Highest Rated DCI Shows #75: Santa Clara Vanguard 1979 (See Description).


The socialist meaning of May Day avoided for another year!

Now for the rest of High-Stepper's clips from the 1979 show, beginning with the opener...


...and ending with the percussion feature into concert.


With this post, I believe I have exhausted the theme of maypoles in drum corps. I may conserve my resources, but non-renewable ones eventually run out. It's time to switch to another theme, such as songs about spring played by drum corps (Appalachian Spring comes to mind), more fake trees in shows like 2012 Phantom Regiment, or just embrace socialist and communist show themes, like "Miss Saigon" by multiple corps and "Animal Farm" by Boston Crusaders. Which do you think I should do? Leave a comment!
Posted by Pinku-Sensei at 11:53 AM