I told my readers "I'll get to the top post of last year on (Throwback) Thursday. Stay tuned" at the end of Statistics for the tenth year of Crazy Eddie's Motie News That top post was Zombie Apocalypse Index for Day of the (Walking) Dead from November 1, 2015, which earned ~11,300 default and ~12,100 raw views between March 21, 2020 and March 20, 2021. I am explaining how the post earned its status as the most read entry during the tenth year of this blog over the jump, but first I'm updating the story beginning with Tips from the CDC for surviving a zombie apocalypse from KTHV11 in Little Rock, Arkansas.

What started as a tongue-in-cheek campaign to connect with Americans has proven an effective way to get folks ready for hurricanes or even pandemics.

That was a brief discussion of the subject. FOX 5 Washington DC had a much fuller one in Just in case: CDC shares tips on surviving a zombie apocalypse.

Yikes! One pandemic at at time is enough! We don't need zombies on top of COVID-19! Still, zombies make great pandemic metaphors. As I wrote in Discovery News on World War Z and repeated most recently in PBS Digital's Storied examines pandemics in literature and entertainment, "Who needs a imaginary zombie plague when a very real flu pandemic combined with mass riots against a background of crumbling infrastructure could produce the same response, if not much the same result?" Considering how 2020 turned out, that description feels eerily prophetic. So does "Contagion."

Roy Wood, Jr., is right about "Contagion." It hits way too close to home, as it accurately predicted what has happened so far. That's a point Grace Randolph made in Beyond The Trailer's Apple to Buy Disney? What to Watch on Netflix, Disney Plus, calling it "scarily accurate."

The specialist I see for my diabetes and I talked about how accurate "Contagion" was during my last appointment, down to the civil disturbances and looting, although those were not directly connected to the pandemic. I told him "we are living in a horror movie." He replied "that's right!" By the way, the movie ended with people receiving the vaccine. That's a good sign, as my wife and I got our first shots today. The horror movie is almost over for us.

Speaking of zombie preparedness, I included a video on that topic in PBS Digital's Storied exhumes the history of zombies for Halloween. Also, one can surf over to the CDC's Zombie Preparedness page and compare their suggestions with Dr. Zarka's.

Follow over the jump for a news report from 2015 about the Zombie Apocalypse Index plus a history of how an entry from six years ago became the most read post last year as well as one of the most read of all time.

The day after I posted Zombie Apocalypse Index for Day of the (Walking) Dead, CSBN (CBS News) asked What cities will survive the zombie apocalypse?

Researchers have developed a list of the worst places to live in the event of a zombie apocalypse. CBSN's Contessa Brewer goes over where you don't want to be when the walking dead attack.

Neither Contessa Brewer nor the video description mentioned the Zombie Apocalypse Index, but that's what this video is describing. Too bad, as I could have used it instead of the more sensational video I used to replace the Wochit News video that formed the core of Zombie Apocalypse Index for Day of the (Walking) Dead when it was deleted last year, along with nearly all the Wochit videos I've embedded in this blog over the years. That's O.K. I'm now able to embed it here without repeating myself.

Enough news videos. I begin my history of this entry by being a good environmentalist and recycling what I wrote about it in Broken Peach sings to update holidays from the back catalog for the ninth year of Crazy Eddie's Motie News last year.*

Today is another day and the entry I'm sure is getting attention because of the pandemic is Zombie Apocalypse Index for Day of the (Walking) Dead. It earned ~1,180 raw page views during the ninth year of this blog to rank 10th overall. That's more than two-thirds of the 1530 total raw page views it had up to March 20, 2020. Like Sears Holdings still 'not dead yet' as deadline extended for rescue offer, it became more popular in January of this year, when it earned 165 raw page views, which would have tied it for 19th that month had I caught it, after been seen only 81 times the month before.* Its popularity continued to increase in February, when my readers viewed it 211 times, not enough to place it in the top 20. It broke into the top 20 in March, when it earned 334 default and 354 raw page views, ranking it tenth according to the former and 11th according to the latter for the month. It's currently the ninth most read entry over the past 30 days with 279 raw page views so far in April and the month still has 13 days to go! Oh, and it broke into the default top twenty for the past 12 months with 733 default and ~1,520 raw page views. Again, this is no mystery to me. As I first wrote in Discovery News on World War Z, "Who needs a imaginary zombie plague when a very real flu pandemic combined with mass riots against a background of crumbling infrastructure could produce the same response, if not much the same result?" My readers and I are finding out.

I added the following in a comment to the post: "Since I wrote that in April, this entry has continued to earn readers to become the most read entry this calendar years with ~10,900 page views during the past 12 months and the 5th most read entry in the history of this blog with ~11,100 page views since it was posted 5 years ago." As I wrote to open the entry, it ended the blogging year with ~11,300 default and ~12,100 raw views. Here's what the page views for the past year looked like this morning, five days after the blogging year ended. Until the page views collapsed in December, they tracked the state of the pandemic, going up when cases and news coverage increased and down as both decreased. 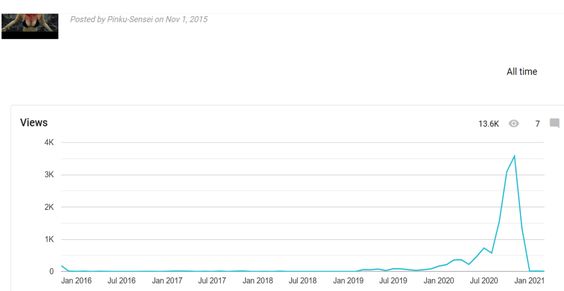 The entry currently ranks fifth all time according to default page views with ~11,400 and fourth by raw page views with ~11,400. Its rise helped push Seeker explains how television entertainment can shape our political opinions out of the all-time top ten and knocked Vox and ProPublica rickroll America's old voting machines right out of the all-time top twenty. Sic transit gloria mundi.

*Broken Peach: Singing Spanish goths and witches for Halloween, which shared the spotlight with Zombie Apocalypse Index for Day of the (Walking) Dead in last year's Broken Peach sings to update holidays from the back catalog for the ninth year of Crazy Eddie's Motie News, gets its own post next. Stay tuned.

Previous posts in this series Entries about top posts from previous years. Previous retrospectives about the back catalog.
Posted by Pinku-Sensei at 8:52 PM