This has been a weird news day.

On the way out the door from from work, I noticed that there had been a flash crash of all three U.S. stock indices.  Joe.My.God captured the 140+ point drop in the Dow shown below. 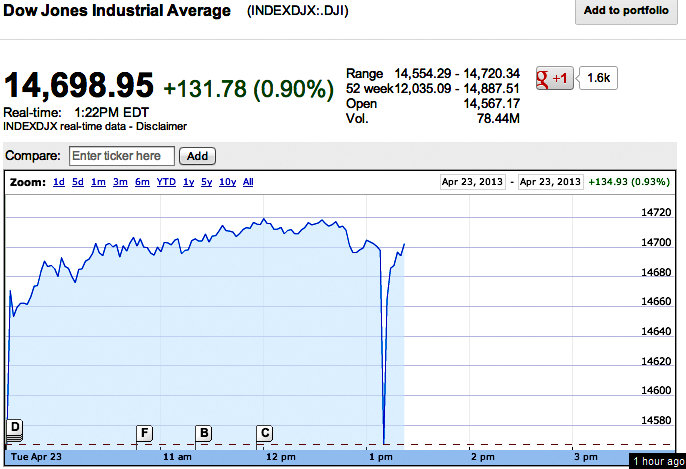 I was afraid it was a computer trading glitch like the 2010 Flash Crash, but it turned out that it was the traders responding to a tweet from the hacked AP account, as CNN reported.


The shocking tweet came from the Associated Press earlier this afternoon: "Two Explosions in the White House and Barack Obama is injured."

The AP's communications team quickly tweeted from its own account that the main AP Twitter was compromised, but investors had already panicked. The Dow Jones industrial average (INDU) immediately plunged by more than 140 points.

And there it is: After years of hacks that typically involved little more than obscene language, Twitter's subpar security measures have now caused serious real-world consequences.

Tech Feed then reported that the Syrian Electronic Army, a
"cybermilitia" (actually a bunch of hackers and script kiddies) loyal to the Assad government took credit.  Here is their video report: Who Hacked the AP Twitter Account?

This morning a tweet was sent from the official Associated Press account that read, "Breaking: Two Explosions in the White House and Barack Obama is injured." Although the tweet was bogus (the account had been hacked), it had a very noticeable effect on the stock market, as Annie explains. She also takes a look at the Syrian Electronic Army, who have taken credit for the hack.

The Syrians?  Really?  I'd never have guessed.

When I came home, two other stories relating to last week's  terror attacks awaited me.

First, Nebris had this gem on his Facebook wall: Former GOP Candidate Reacts After Man He Allegedly Framed For Ricin Poisoning Is Released.  Elvis has left the building just as the rabbit hole was revealed to be even deeper.

Second, another Facebook friend shared Salon's report that Tamerlan Tsarnaev was an Alex Jones fan.  Jones immediately claimed that the news was evidence of a plot against him.


UPDATE: Sure enough, within minutes of the AP story breaking, Jones told BuzzFeed’s Rosie Gray that it’s all a conspiracy against him:


“I’ve seen this before,” Jones said. “The federal government trying to connect me to tragedies. That’s the media and the government’s own conspiracy theories.” Jones compared the situation to when Richard Andrew Poplawski, a Pittsburgh man who killed three police officers in 2009, was shown to be a conspiracy theorist who frequently visited the Infowars website. “It’s standard for them to talk to people, go through computers, and any time someone’s done something bad they connect it to us,” Jone[s] said.


And so we come full circle, starting with a fake AP story and ending with claims of another fake AP story.   Jones' protests to the contrary, I think that final AP story is real, although I'm motivated to do so.  After all, it means that the U.S. Right now has to disclaim Tsarnaev, as the Infowars association makes him one of them.  Excuse me while I suppress a wicked snicker.
Posted by Pinku-Sensei at 8:53 PM