I concluded The corner station loses another battle in the gas price war with the following programming note.

Speaking of my car, it's about to turn over another thousand miles.  Look for an update on that tonight.

Looking back at the last driving update, it seems I called when this one would happen.

It looks like I'm in good company by increasing the miles driven by Americans over the past month, however slightly.  As for whether I continue contributing to that trend, check back in April, when I expect one or both cars will have turned over the next 1,000 miles.

Right on schedule, my car's odometer turned over 216,000 miles yesterday afternoon.  That means I drove 1,000 miles in 84 days for an average of 11.90 miles/day and 363.1 miles/month since January 25, 2013, an decrease of 0.15 miles/day and 4.4 miles/month over the 12.05 miles/day and 367.5 miles/month I drove between November and January.  I'm surprised I didn't drive less, as I did not drive at all from February 25th to March 7th while I recovered from surgery and skipped one of my regular meetings the week after that.*

While I drove my car less this quarter than I did last quarter, a comparison with this time last year shows that I'm still driving more.  From February to May 2012, I drove an average of 11.4 miles per day. Multiplying by 30.5 days per month, that means I drove 347.7 miles per month.  That means I'm driving 0.5 miles more per day and 19.8 miles/day more than a year ago.  I attribute most of that to the weather, which is much colder than last year.  Also, I'm still not recovered enough from surgery to walk to the nearest grocery store.  Maybe next month both the weather and my body will cooperate with walking more.

In case you're wondering about my wife's car, she and I had driven it just over 500 miles since December.  It's too soon for another report.

As for how my personal driving habits are contributing to the overall picture, I'll have to rely on data from January posted last month on Calculated Risk.  This month's data will not be posted until Tuesday or Wednesday, just in time for me to use it in my geology lecture on energy and mineral resources.

Based on preliminary reports from the State Highway Agencies, travel during January 2013 on all roads and streets in the nation changed by +0.5 percent (1.2 billion vehicle miles) resulting in estimated travel for the month at 226.9 billion vehicle-miles.

Looks like my driving back in January help increase the total miles driven then.  I'll have to wait another three months to see if my slightly decreased miles driven last month worked with or against the trend.  Until then, I'll leave you all with the rolling 12-month total miles driven graph, which was going sideways. 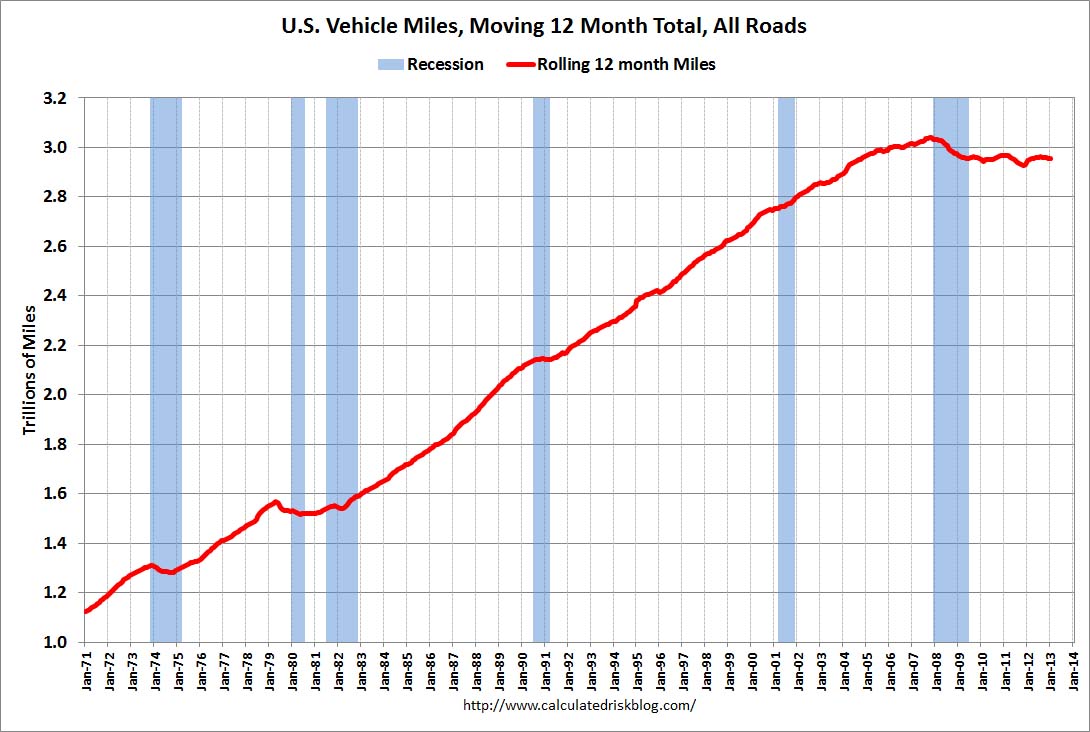 *The story of my surgery is one I'm saving for next week, as it turned out to be a fresh start.  That fits the prompt for next Wednesday.
Posted by Pinku-Sensei at 2:54 AM