Votes in the suburbs

In Good and bad news for public transit in Detroit, I described how the City of Detroit's bus system lost $7 million to the suburbs SMART system.  That reminded me that I had the following on file for an appropriate occasion.  Now looks like a good time to use it.

One of the points made in "The End of Suburbia" is that political change that would help move the United States away from its unsustainable life style is made more difficult because about half of the U.S. population lives in suburbs, so Suburbia carries disproportionate weight in U.S. elections.  Nate Silver touches on that idea in Did Democrats Get Lucky in the Electoral College?  One of the graphics he uses is this one ranking states by percentage of voters in urban areas.  It also shows the percentages of voters in the suburbs and countryside.

Here's what Nate wrote about it.

The chart below reflects the percentage of voters in each state that are in urban, suburban and rural areas, according to 2008 exit polls. (The exit polls did not contain good data for Alaska and Hawaii, so I had to infer these separately.) Some 33 of the 50 states have somewhere between 20 and 50 percent of their populations in urban areas. Only one state (Nevada) has more than half its population in urban centers (Nevada occupies a large amount of territory, but most of its population is in Las Vegas). Only eight have under 10 percent of their population in urban areas (including New Jersey, which is otherwise suburban rather than rural). 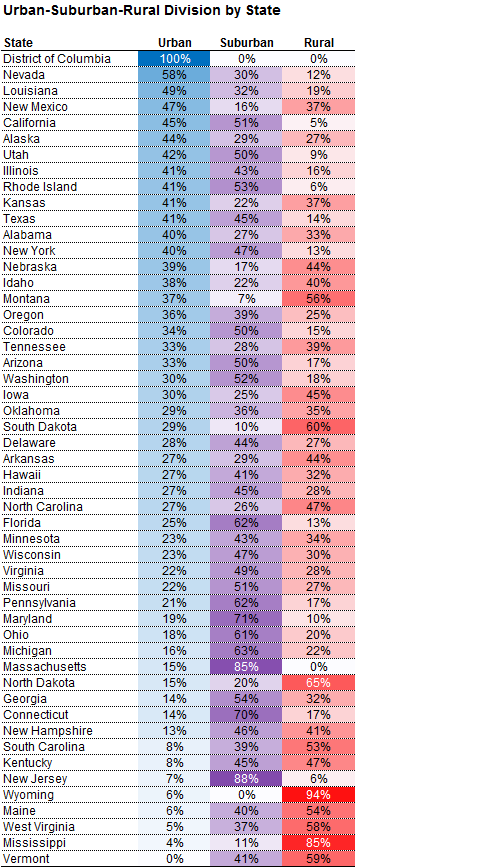 Note that 63% of Michigan's voters live in the suburbs, while only 16% live in true urban areas.  I'm sure that imbalance helps explain why SMART got $7 million that would otherwise have gone to DDOT.

After several paragraphs, Nate concluded his analysis by considering the effect of the urban-rural balance in states on the Electoral College.

As a byproduct of the Congress’s goal of equalizing geographic resources across the states, most states have reasonably diverse populations and economic interests, and the income distribution across the states is reasonably even. The poorest state in 2009 was Mississippi, which had a median household income of about $35,000, while the wealthiest was New Jersey (about $65,000). This range is narrow when compared to almost any other type of geographic division. More than 90 of the 435 Congressional districts, for instance, fell somewhere outside this range.

As a result, the Electoral College does not convey all that much advantage to rural voters versus urban ones, or wealthy voters versus poorer ones, and therefore does not provide all that much long-term advantage toward either party. The Democrats slightly benefited from the Electoral College in 2008 and 2012, but the opposite was true as recently as 2000.

Although he had the data handy, he managed to ignore the effects of the suburban vote.  Too bad.  It would have been very informative.
Posted by Pinku-Sensei at 8:30 AM