What was yesterday's prompt?

I don't think so, not if the best I can do is mow the lawn and grow tomatoes.  Tomatoes are really easy; all I have to do is weed, water, and get out of the way.  Instead of writing about my mediocre attempts at gardening, I'll discuss a local publication's efforts to promote green efforts to improve Detroit. 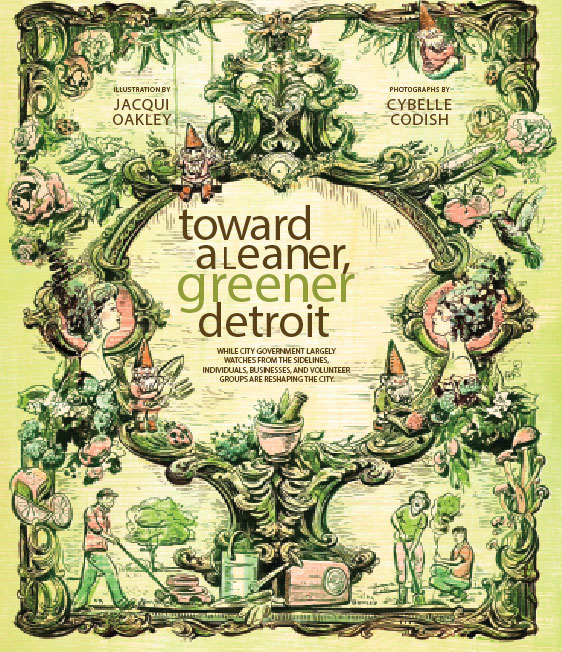 This month, HOUR Detroit features six articles describing progress Toward a Leaner, Greener Detroit.  The introduction points out two important ideas that appear to contradict themselves, although they complement each other.  First, the article notes that vacant land is simultaneously the city's biggest liability and biggest asset.  It also observes that the efforts to address this paradox come mostly from individuals, businesses, and volunteer groups while city government watches from the sidelines.


While gridlock grips the halls populated by elected officials, progress grinds on largely because of the efforts of neighborhood block clubs, nonprofit organizations, private businesses, and everyday Detroiters laying claim to their own destinies. Thanks to the Detroit Future City plan, this patchwork of doers now has a unified vision to work toward.

Part of the vision relies on turning the land — plagued today by high vacancy and blight — into the asset that it can become with a little imagination and a lot of sweat. Noting the inefficiency of the single-family homes that Detroit is known for, with their expensive, “over-scaled” infrastructures, the framework imagines a city of more diverse housing in “a canvas of green”: open green space, urban woodlands, ponds, streams, and urban farms and gardens. Naturally flowering meadows could eventually give way to forests. The plan envisions productive landscapes that clean the soil and air and help alleviate storm-water runoff, lessening the burden on Detroit’s aging sewer system. “Green buffers” of trees would hug the major highways, decreasing noise and traffic pollution to the surrounding neighborhoods.

Follow over the jump for a guide to the other five articles that detail this vision and the people trying to make it come to life.

The article I suggest one reads after the introduction in The Green Grid, which describes the effort as "[b]eating blight and boosting health with beans and berries."


Increasingly, post-industrial Detroit businesses and nonprofits, with seed, trowel, and sweat, are joining community gardens on the green grid to transform unused spaces into productive urban landscapes that banish blight and feed communities.

Urban gardening isn’t new, but it does have the power to flip unused vacant land from liability to asset, according to Dan Kinkead, design principal at Hamilton Anderson Associates in Detroit and a member of the Detroit Future City planning team. “Detroit needs to identify innovative ways to reutilize available land to improve its productive capacity and overall contribution to the city,” he says.

While business gardens are unlikely to change the city dramatically, they can have a positive impact, says community revitalization expert Dale Thomson, associate professor of political science at the University of Michigan–Dearborn. “Beyond the health and nutritional effect, there is an educational component, allowing groups access to resources to provide training, with a focus on youth in the neighborhood,” he says.

The article goes on to describe three groups who are doing their part to improve Detroit through urban agriculture, but don't get as much attention as Urban Farming, the Capuchin Soup Kitchen, or Hantz Farms.  One of them, Riet Schumack of Brightmoor Youth Gardens, has an article all to herself in Sowing Seeds of Change.  The story of how she started her community garden for children leads to an organization I should have expected to see in a series like this.


Schumack got to know her new surroundings and struck up conversations with neighbors, who made the needs of the neighborhood known. Opportunities presented themselves. After moving in, Schumack took an inventory of what was important to her. “The two things I could come up with,” she says, “[were] children and gardening. I decided to start a garden for kids.”

The concept of community organizing was completely foreign to Schumack before she mistakenly took the Greening of Detroit’s “Urban Roots” workshop, thinking it was a master’s gardening class. It turned out to be a course built around community organizing through horticulture.

“One of the things they teach you is that starting a garden is a very good crime and blight deterrent,” Schumack says. “We cleaned up the lot and got the garden going. Within six to eight weeks, the crack house was busted up by the police. The amount of trash I was picking up went down to a small plastic bag’s worth every two weeks.”

Ah, yes, Greening of Detroit.  As if on cue, they have their own feature article, Seeing Beyond the Trees, which describes how the city's leading environmental charity is about more than planting trees and vegetable gardens.


It’s a deceptively simple question: Where does the water go when it rains?

If you’re working for the Greening of Detroit, you’re going to know how complicated the answer really is. And in painstaking detail. Much more than the average citizen, at least, for whom the concept of “water” is easy to take for granted.

Yet in the Corktown office space of the Greening, which has quietly operated for more than two decades as one of the city’s most respected environmental initiatives, President Rebecca Salminen Witt explains why water issues shouldn’t just be the domain of high-minded environmentalists. It’s about money, too, she says — something that practically everyone can appreciate in a city and region plagued by financial woes.

If residents understood where their water went, and if the city could embrace a viable way to use its water more efficiently, the Greening believes there would be long-term economic — as well as environmental — benefits.

“You’d be amazed at how quickly the savings would add up just by diverting water to green infrastructure instead of letting it go to a water-treatment plant,” Witt says.

I was just lecturing about how urbanization affects surface and ground water yesterday--how timely!

Green thumbs don't just grow food.  They also maintain parks, flower gardens, and fields.  An example is the effort to preserve and improve Palmer Park, Detroit's 'Other' Jewel.  Belle Isle may get the lion's share of attention, but Palmer Park is just as worthy of notice, also both much closer and more accessible to me.

Finally, there is a Grass-Roots Effort to preserve old Tiger Stadium and keep it attractive.


And it hasn’t gone unnoticed. Baseball fans from around the country now regularly flock to see this field of dreams. “This is no Hollywood version, either,” Derry says. “This is the real deal. Shoeless Joe Jackson actually did play on this field.”

What I find amazing about reading these articles is they are something I expect out of Model D Media, the attitude of which I've described as "optimism, but not business as usual."  I don't expect paying serious attention to grassroots action to improve the city from a lifestyle magazine that highlights dining, entertainment, fashion, and movers and shakers and is geared to the local well-off and want-to-be well-off.   Just that same, that's what's happening.  Welcome to Detroit, where even the rich keep it real, or at least appreciate those who do.
Posted by Pinku-Sensei at 12:30 AM