For the most recent Overnight News Digest: Science Saturday on Daily Kos, I decided to look at Time Magazine, which I've used in past years' lectures on science and the scientific method as a good example of how science is misrepresented in the mainstream media.  Media outlets change with the times, some for the worse and some for the better.  Reuters, for example, has become a lot less user friendly for readers looking for environmental coverage.  It's still there, but it's much harder to locate.  I was hoping that Time's science coverage had improved since I last looked at it a few years ago.  To my surprise, it had, featuring three articles by Bryan Walsh about the causes and effects of climate change.

The first, The IEA Says Peak Oil Is Dead. That’s Bad News for Climate Policy, explains how the development of unconventional oil will, as I wrote in Carbon Dioxide at Miocene levels, allow us to 'burn it until we reach Jurassic levels of carbon dioxide and global warm temperatures.'

No one—aside maybe from survivalists who’d stocked up on MREs and assault rifles—was really looking forward to a peak-oil world. Read this 2007 GQ piece by Benjamin Kunkel—while we’re discussing topics from the mid-2000s—that imagines what a world without oil would really be like. Think uncomfortable and violent. Oil is in nearly every modern product we use, and it’s still what gets us from point A to point B—especially if you need to get from A to B in a plane. If we were really to see the global oil supply peak and decline sharply, even as demand continued to go up, well, apocalyptic might not be too large a word. And for several years in the middle of the last decade, as oil prices climbed past $100 a barrel and analysts were betting it would break $200, that scenario seemed entirely plausible.

But there was an upside to peak oil. Crude oil was responsible for a significant chunk of global carbon emissions, second only to coal. Only the shock of being severed from the main fuel of modernity would be enough to make us get serious about tackling climate change and shifting to an economy powered by renewable energy and efficiency. We’d have to because we’d have no other choice, save a future that might look something like Mad Max. We’d lose oil but save the world.

Increasingly, though, that doesn’t seem likely to happen.

Here's the graphic from the IEA. 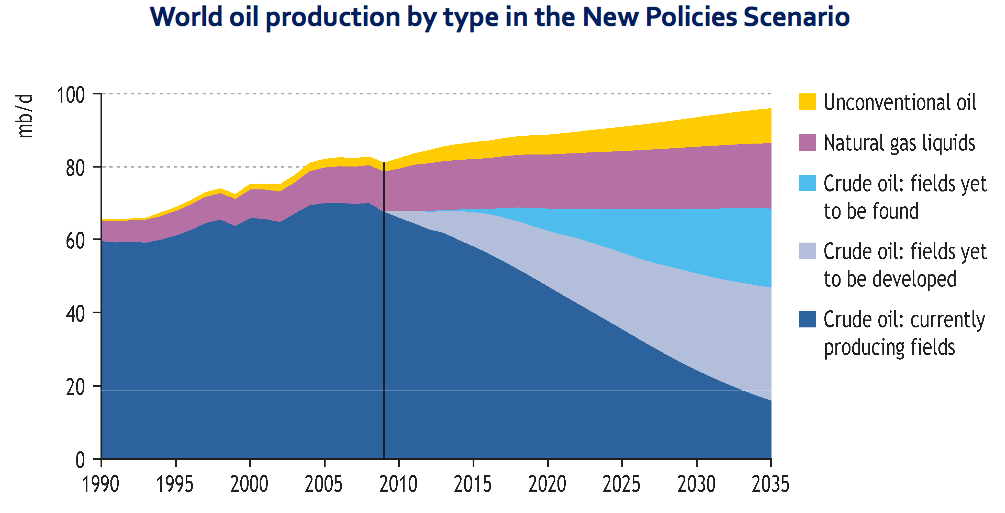 It shows that peak conventional oil happened right on schedule in 2006 and even the optimists at the IEA don't think conventional oil production will ever return to its highs of the last decade.  The doomers were right about that one.  What they didn't foresee was that technology would finally catch up with demand to deliver new sources of fossil fuel to the market.  That took nearly a decade to happen and the delay resulted in all of the energy supply reasons for the wrenching economic contraction of the past five years.  Now that a combination of reduced demand and increased unconventional oil has managed to loosen what New Deal Democrat at The Bonddad Blog calls the oil choke collar.  That would be good for the current economy and allow more time to develop non-fossil fuel sources of energy, but terrible for the climate and the rest of the planet's natural environment in the medium and long range.

Follow over the jump for what Bryan Walsh of Time Magazine thinks climate change will do to biodiversity, including some wild animals we depend on for food.

Why a Hotter World Will Mean More Extinctions

The end of last week saw the carbon concentrations in the atmosphere finally pass the 400-part-per-million threshold. That means carbon levels are higher now than they’ve been for at least 800,000 years, and most likely far longer. There’s nothing special per se about 400 parts per million — other than giving all of us a change to note it in article like this one — but it’s a reminder that we are headed very fast into a very uncertain future.

Parts per million and global temperature change, though, are just numbers. What matters is the effect they will have on life — ours, of course, but also everything else that lives on the planet earth. I’ve written before that while I certainly worry and fear the impact that unchecked climate change will have on humanity, I also feel relatively — relatively — confident that we will, in some ways, muddle through. Human beings have already proved that they are extremely adaptable, living — with various degrees of success — from the hottest desert to the coldest corner of the Arctic. I don’t think a future where temperatures are 4?F or 5?F or 6?F warmer on average will be an optimal one for humanity, to say the least. But I don’t think it will be the end of our species either. (I’ve always favored asteroids for that.)

But the plants and animals that share this planet with us are a different story.

I tell my students that the Jurassic was a great time for dinosaurs, but there were no humans around.  Walsh is more sanguine about the prospects for humans, but he may be right about our survival.  In fact, he probably will be.  I think humans will survive a warmer climate.  I'm not nearly so confident about modern technological civilization.  That requires a lot of resources, including wild-caught food, which is also in danger.

It’s easy to forget that global warming doesn’t just refer to the rising temperature of the air. Climate change is having an enormous, if less understood, impact on the oceans, which already absorb far more carbon dioxide than the atmosphere. Like so much of what goes on in the vast depths that cover more than two-thirds of our planet’s surface, the effect of climate change on the oceans remains a black box, albeit one that scientists are working to illuminate.

Here’s one way: fisheries. Wild fish remain a major source of protein for humanity — as well as a major source of reality-TV shows — and for some coastal communities, fish mean even more. Scientists aren’t clear about what effect climate change, including the warming of the oceans, will have on wild fisheries. As Mark Payne of the National Institute of Aquatic Resources writes in a new piece in Nature, ocean researchers “tend to view climate change as a dark cloud on the horizon: potentially problematic in the future, but not of immediate concern” — especially compared with the much more pressing threat of simple overfishing.

But now a new study in Nature makes the case that climate change — including the warming of the oceans — is already having a direct impact on global fisheries.

Walsh didn't even add in the effects of ocean acidification, which is already affecting oysters and other shellfish.