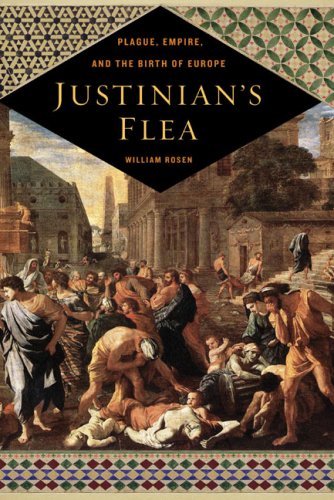 Although the author of Peak Civilization, the article at The Oil Drum about the collapse of the Western Roman Empire, might disagree, it looks like disease might have contributed to the end of the expansion of the Eastern Roman Empire under Justinian.  Charles Choi of LiveScience explains in Plague Helped Bring Down Roman Empire, Graveyard Suggests.


Plague may have helped finish off the Roman Empire, researchers now reveal.
...
The bacterium that causes plague, Yersinia pestis, has been linked with at least two of the most devastating pandemics in recorded history. One, the Great Plague, which lasted from the 14th to 17th centuries, included the infamous epidemic known as the Black Death, which may have killed nearly two-thirds of Europe in the mid-1300s. Another, the Modern Plague, struck around the world in the 19th and 20th centuries, beginning in China in the mid-1800s and spreading to Africa, the Americas, Australia, Europe and other parts of Asia.

Although past studies confirmed this germ was linked with both of these catastrophes, much controversy existed as to whether it also caused the Justinianic Plague of the sixth to eighth centuries. This pandemic, named after the Byzantine emperor Justinian I, killed more than 100 million people. Some historians have suggested it contributed to the decline of the Roman Empire.

To help solve this mystery, scientists investigated ancient DNA from the teeth of 19 different sixth-century skeletons from a medieval graveyard in Bavaria, Germany, of people who apparently succumbed to the Justinianic Plague.

They unambiguously found the plague bacterium Y. pestis there.

The same source who sent me the above article also sent me the next, which I placed together in Overnight News Digest: Science Saturday (Carbon Dioxide 400 ppm) on Daily Kos as a reminder that, to paraphrase Samuel Clemens, history may not repeat, but it certainly does rhyme and also that resource depletion and environmental degradation aren't the only threats to civilization.


I’m not on the pandemic beat, but some of the best science journalists are, and they are busy these days. Today, David Quammen, author of the recently published and critically acclaimed book, Spillover: Animal infections and the next human pandemic, has an op-ed in the New York Times. It begins:


Terrible new forms of infectious disease make headlines, but not at the start. Every pandemic begins small. Early indicators can be subtle and ambiguous. When the Next Big One arrives, spreading across oceans and continents like the sweep of nightfall, causing illness and fear, killing thousands or maybe millions of people, it will be signaled first by quiet, puzzling reports from faraway places — reports to which disease scientists and public health officials, but few of the rest of us, pay close attention. Such reports have been coming in recent months from two countries, China and Saudi Arabia.

The worrisome Chinese bird flu strain that has gotten a lot of attention is not, in its present form, going to cause a pandemic, says Thomas Frieden, director of the U.S. Centers of Disease Control (CDC). But if you want to learn about the potential for its lethal mutation, and why you should be worried about it, read this piece in Foreign Policy by veteran science journalist Laurie Garrett.

Follow over the jump for the latest on the other pandemic threat coming out of Saudi Arabia.

Science Magazine: 'MERS' Makes Its Debut in a Scientific Journal
by Martin Enserink
15 May 2013, 3:15 PM


A group of coronavirus experts has published its proposal to name a new, deadly virus after the Middle East, the region where it originates. In a short paper published online today by the Journal of Virology, the Coronavirus Study Group (CSG), along with several other scientists, recommends calling the pathogen Middle East Respiratory Syndrome Coronavirus (MERS-Cov).

As ScienceInsider reported last week, the group, part of the International Committee on Taxonomy of Viruses, hopes to end confusion about the name of the virus.
...
Geographical names are often controversial because they can be seen as stigmatizing, but CSG chair Raoul de Groot of Utrecht University in the Netherlands says that the reference to the Middle East was eventually acceptable to all. He hopes that the paper will end the debate.


The Ministry of Health in Saudi Arabia has informed WHO of an additional two laboratory-confirmed cases with infection of the novel coronavirus (nCoV).

Although health care associated transmission has been observed before with nCoV (in Jordan in April 2012), this is the first time health care workers have been diagnosed with nCoV infection after exposure to patients. Health care facilities that provide care for patients with suspected nCoV infection should take appropriate measures to decrease the risk of transmission of the virus to other patients and health care workers. Health care facilities are reminded of the importance of systematic implementation of infection prevention and control (IPC).

Since the beginning of May 2013 to date, a total of 21 patients, including nine deaths, have been reported from the outbreak primarily linked to a health care facility in the Eastern part of Saudi Arabia. The government is conducting ongoing investigation into the outbreak.

As I wrote in In Russia, space explores you!


This blog is still about how to avoid the collapse of the current civilization and takes a science-fiction slant on the topic.  An asteroid impact is the perfect merger of the two.

So are pandemics.  We need to be prepared for them, too.
Posted by Pinku-Sensei at 1:09 AM