I haven't blogged about the stock market since the Twitter Flash Crash.*  That's merely a sideshow, as the main story is looking for a top to the current bull market.  I thought that the market was getting long in the tooth in March, when the S&P 500 set a new record.  Nope.  Then on April 11th, there was another record close for Dow and S&P 500


U.S. stocks had another day of gains Thursday that pushed the Dow and S&P 500 to new record highs.

"It's a market that's climbed the walls of worry. When there are pullbacks, the market rebounds quickly," said Tim Ghriskey, chief investment officer at Solaris Asset Management.

The market then declined, so I thought that was the top.  It turns out  I was wrong, as last Friday's headlines looked like this.  Reuters used a general headline: US STOCKS-Dow, S&P 500 close at record levels after jobs report.   USA Today, as reprinted in the Detroit Free Press, highlighted the specific technical levels important for market psychology: Stock records: Dow 15,000, S&P 500 above 1,600.  Ironically, it was Reuters that had the exact closing numbers, as the USA Today article was written while the markets were still open.

Both the Dow and S&P ended at all-time closing highs. For the week, the Dow rose 1.8, the S&P gained 2 percent and the Nasdaq rose 3 percent in its biggest weekly climb since the first week of the year.
...
The Russell 2000 stock index of mid- and small cap companies also hit a record, confirming the broadness of the rally. About 70 percent of stocks on both the New York Stock Exchange and the Nasdaq ended in positive territory.

So what inspired traders?


Non-farm payrolls rose by 165,000 last month and the unemployment rate fell to 7.5 percent, a four-year low, from 7.6 percent, the government said. In addition, hiring was much stronger than previously thought in February and March.

Investors welcomed the gains after weeks of disappointing data, including tepid manufacturing reports, that suggested the economic recovery was losing steam.

Those "weeks of disappointing data" were what I expected back in February, when I expected that the effects of the sequester, the latest serving of Satan Sandwich, would take hold.  So far, the sequester isn't having much of an effect on the investor class (the one consequence they felt, flight delays, was solved last month) and isn't causing unemployment to rise.  As Calculated Risk showed last Friday, unemployment fell to a level not seen in nearly five years. 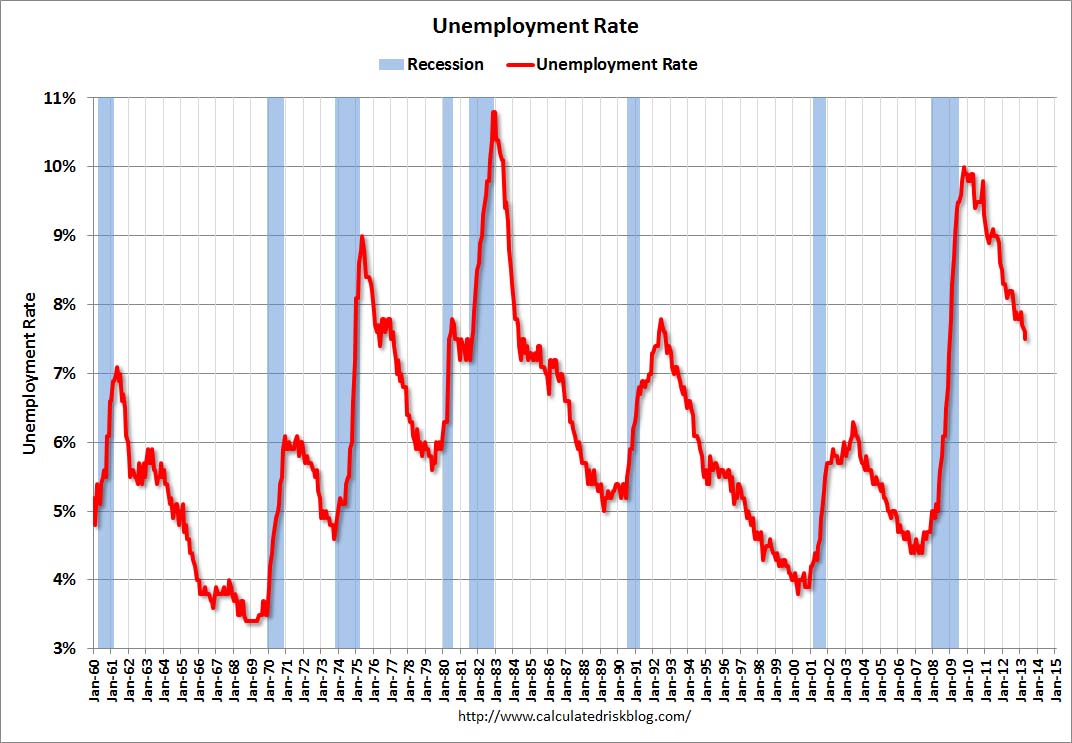 I'd break out Professor Farnsworth, but he would interfere with the message I left over at Kunstler's blog this morning.

As for how things are playing out on Wall Street, this morning the broader indices, the NASDAQ and S&P 500, opened up, while the Dow is retreating from 15,000.  Looks like that's the next psychological barrier.

*If the Syrian government wanted the U.S. to intervene in their civil war, then this was almost as good a reason to do it as use of chemical weapons.  Too bad for them it will prompt the U.S. to help the rebels, not the government.
Posted by Pinku-Sensei at 9:49 AM