Driving update for August 2013: Other car

I concluded Driving update for July 2013 for my car by predicting when I'd post this update.

Note that this is the update for my car.  My wife's car is within a few score miles of rolling over 85,000 miles, 1,000 miles more than the vehicle had in December 2012.  Expect a report for her car later this month.

As you can see, she took almost a full month to drive about 80 miles, delaying this update until August.  It looks like she more than made up for my increased driving by cutting down on hers.

That's the immediate perspective. What about the longer range view, beginning with the baseline?

[M]y wife and I drove our two cars an average of 19.1 miles/day and 581.6 miles/month since August.  I won't be able to say until April at the earliest whether this means the total miles driven by the two of us is going up or down, but at least I now have a baseline.

During the same interval that my wife's car took to drive 1000 miles, mine drove more than 2,000.  Using these data and my current odometer reading, I calculate that I drove 2818 miles on my car while we both drove 1000 miles on my wife's.  Combined, we drove both vehicles 3818 miles in 228 days.  That's 16.75 miles/day and 510.8 miles/month, 2.35 miles/day and 70.8 miles/month less than we drove during the baseline period last year.  That means that while I've been fretting about my increased mileage, my wife has been doing her part to lower our family's driving and resulting ecological footprint.  Yay for my wife!

By the way, our family is bucking the trend, as Calculated Risk reported last month that Vehicle Miles Driven increased 0.9% in May.

Here's the latest graph of miles driven from that article. 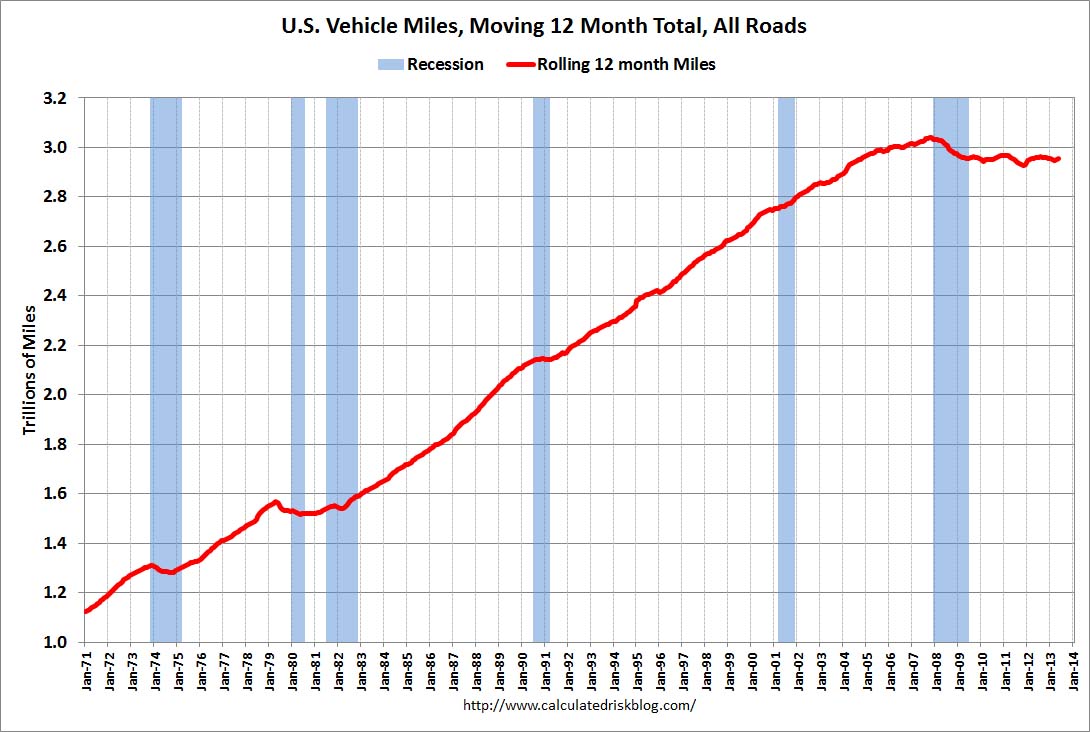 I'm very happy about this, and I haven't even bought a bike for myself yet, as I'm been promising for the past two years, although I did buy one for my wife.  Next year.
Posted by Pinku-Sensei at 12:01 AM