Signs of the other Peak Oil

When people talk or write about Peak Oil, they're usually discussing peak oil production.  There is another form of peak oil that goes along with it, peak oil consumption.  Usually peak production forces peak consumption from lack of supply, but sometimes its the higher prices or the development of a better alternative that changes consumption pattersns.  For example, coal got replaced by oil beginning about 100 years ago, which likely slowed consumption and delayed peak production by decades.  A temporary peak in consumption even happened with oil.  In The End of Suburbia, which I consider to be the definitive Peak Oil movie, Richard Heinberg admits that the price shocks of the 1970s oil crises destroyed demand and delayed global peak by at least a decade.  What if that's happening again?

For years, there’s been lots of debate over “peak oil” — the notion that, at some point in the near future, the rate of global oil production will bump up against a hard ceiling. This is generally considered a gloomy prospect.

But another, related concept has started to bubble up in energy discussions lately. It’s the notion of peak oil demand.

This is the idea that the world’s appetite for oil may not be bottomless after all. Thanks to a combination of price increases, improvements in vehicle efficiency, as well as the advent of alternative fuels and electric cars, we may reach a point in the coming decades where the world’s demand for oil actually starts declining. And if that happens before peak oil production hits, well, that would come as a relief.

Follow over the jump for more about peak consumption and its signs.

Plumer uses three figures to tell his story.  First, he shows that demand could flatten out by the end of this decade. 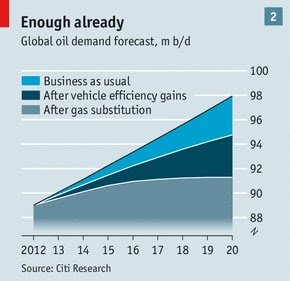 The key thing to note is that peaking of demand will involve substitution of one fuel source for another.  People will still want something to run their vehicles, whether that's electricity from whatever source, natural gas, tar sands oil, or shale oil.  Remember, Peak Oil is about peak conventional oil, not all oil.   Hubbert's prediction was about the fields on land that could be pumped, not about oil that had to be dug out of the ground or fracked.  Those are both unconventional oil and will have their own production curves and Hubbert peaks.  Plumer notes that when he discussed his next graph, which is about global demand projected to the end of the century. 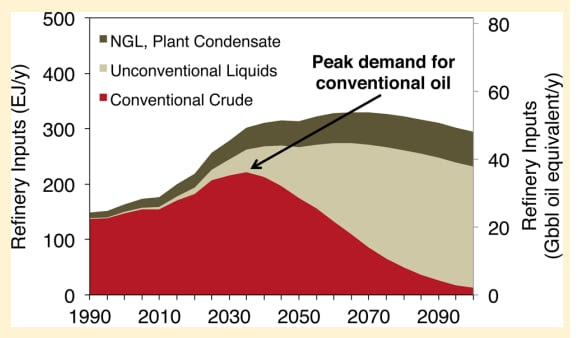 He's quite worried about the form that the "unconventional liquids" will take.  If it's electricity from renewable sources to power electric cars, that's good.  It will reduce greenhouse gas emissions and the resulting warming of the planet.  If it's natural gas or biofuels, it will slow greenhouse gas emissions.  If it ends up being tar sands and fracked shale oil, we'll go to Jurassic levels of carbon dioxide and see if the high scenario in NASA simulations of this century's climate comes true.  Lovely.

However, there are already signs that demand is being destroyed in the U.S.  One of the unusual ones is the delaying of the nation's ethanol fuel goals, as Plumer of WaPo again describes in The U.S. is hitting its ethanol limit. So the EPA may relax its biofuels rules.

When it comes to ethanol, the United States appears to have reached its limit — at least for the time being.

Back in 2007, Congress passed a law that would essentially require the nation to use more and more ethanol and other biofuels each year. But for reasons of chemistry and economics, those targets are becoming increasingly difficult to fulfill. That helps explain why, on Tuesday, the Environmental Protection Agency took the rather unusual step of announcing that it would look into ways to adjust those targets in the years ahead.
...
When Congress passed the law in 2007, lawmakers figured that Americans would keep using more and more gasoline each year, and all that ethanol would make up a small portion of the total. Instead, the opposite happened. Americans started buying more fuel-efficient cars and driving less. U.S. gasoline use is actually falling right now.

This goes right along with what I reported in Happy Motoring in the U.S. has peaked.  Not only have miles driven not returned to their pre-recession peak of 2007, as I docmented most recently in Driving update for August 2013: Other car, but a whole set of measurments of car ownership have declined.  People are driving less and buying more fuel efficient cars.  That brings me to the third graph Plumer used.  It's not just cars, but all forms of motorized land transport that are showing this pattern, and it's happening in all developed countries. 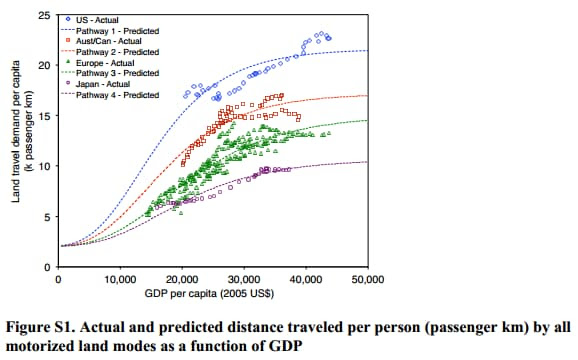 Crazy Eddie thinks we might just squeak out of collapse after all--at least this time and from this cause.