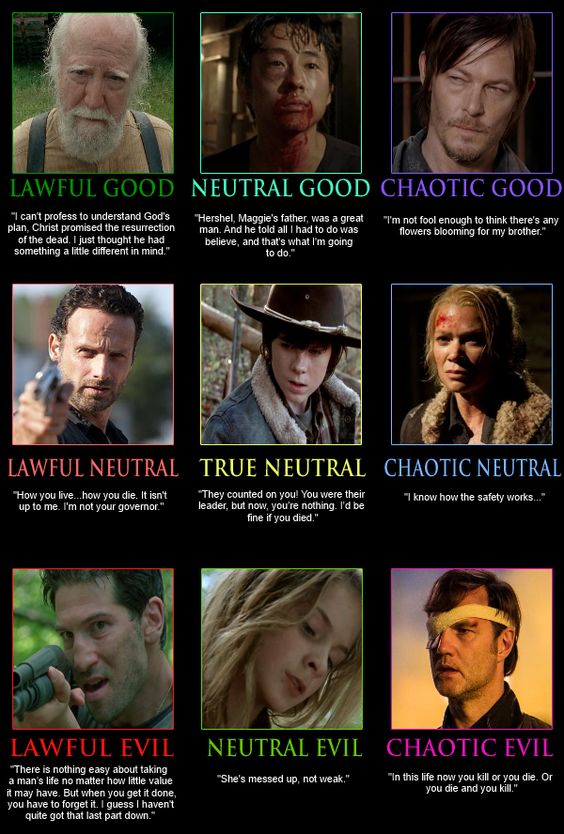 I'm enjoying posting retrospectives on Throwback Thursday, so I'm continuing with the series about the top entries of the past blogging year.  Today' theme uses alignment charts of characters from speculative fiction.  I begin with D&D alignment charts for 'The Walking Dead', the seventh most read post of the fifth year of the blog.  As of March 20, 2016, it 1287 page views according ot the raw counter and was the highest ranking post of the past year not to get on the all-time top ten.

Like my previous entries, I'm going to be a good environmentalist and recycle how it earned most of those page views, this time from Monthly meta for April 2015: record page views plus goals, top posts, and Nablopomo for May 2015.

The final honorable mention for April 2015 belongs to "D&D alignment charts for 'The Walking Dead'."  Before it fell off the monthly top ten a couple days before the end of the month, it had 135 page views, 192 according to the raw counter.  It earned nearly all of its page views from normal social media promotion and web search.  The rest came from sharing the link in a comment at Michigan Liberal.

The entry returned to the monthly top ten several times.  Here is what I wrote about it for August.

The second alignment chart entry as well as the second entry about zombies to make August's top ten was "D&D alignment charts for 'The Walking Dead'."  This blast from the past, posted March 29, 2015, earned its 159 page views by being first searched for during a marathon of "The Walking Dead" to promote "Fear the Walking Dead," and then shared on the science fiction and horror groups on Facebook that same day.  Nothing like striking while the iron is hot to return it to the top ten, where it placed seventh overall.

It returned again in October.

"D&D alignment charts for 'The Walking Dead'" was the first of three entries from the back catalog to make October's top ten.  This entry came in eighth with 167 page views, earning them solely through search.  I don't recall sharing this in time for the premiere of season 6, so I had nothing to do with its renewed success.

"D&D alignment charts for 'The Walking Dead'" posted March 29, 2015 was the next entry from the back catalog to make the top ten.  It came in seventh with 133 page views, which it earned entirely from web search.  Like last month, when it was the eighth most read entry, I did not promote it on communities and groups for "The Walking Dead" on Facebook and Google Plus.

Looks like I created an entry with evergreen interest.  I'll be sure to promote it when "The Walking Dead" returns in October.

Follow over the jump for the other alignment chart entry to make this year's top ten.

The second entry featuring alignment charts to make the top twenty for the year was 'Star Wars' alignment charts.  It earned 1119 page views according to the raw counter, placing it eighth among last year's posts.  I'll recycle what I wrote for Record page views for August 2015 and other monthly meta to explain its popularity.

"'Star Wars' alignment charts" published August 16, 2015 was the second most read entry overall and either the first according to the default counter with 320 page views or the second according to the raw counter with 327 page views among all entries posted during August.  Since I usually use the default counter and the other contender won the most comments award, I'm giving the new entry trophy to this post.  It earned its page views by being shared on the science fiction and Star Wars groups on Facebook along with web search.

Like the previous entry, this one popped up again and again in the top ten.  It showed up in December.

The back catalog champion for December was "'Star Wars' alignment charts," posted in August 2015.  This entry popped up briefly in the default top ten at the start of December with 88 page views, enough to push out "'SPECTRE' knocks 'The Martian' out of number one at the U.S. box office" for a few hours.  I later shared it on the Star Wars and Science Fiction groups on Facebook in advance of "The Force Awakens" opening.  As a result, it returned to the top ten later in the month with 153 page views before it fell out on Boxing Day, then fought with "Darth Trump strikes back as The Farce awakens" for the rest of the week.  It ended up tied with that post for ninth at the end of December. In the long run, it won, as it ended the blogging year with 1119 raw page views, placing it eighth among all entries posted during the fifth year of this blog.

Web search brought my readers to "'Star Wars' alignment charts."  I helped it along by sharing it on social media for a Throwback Thursday/Flashback Friday.  The result was another 165 page views during February for this entry originally posted on August 16, 2015.

Again, I created an entry that maintains its readership.  This is why I post alignment charts; they're popular.

I'm giving an honorable mention to 'Pirates of the Caribbean' alignment chart.  It ended up out of the top twenty, earning only 356 page views.  That would have placed it in the top twenty last year, but was 90 page views short of making the list this year.  Here' what I wrote about it last September.

The ninth most read overall and the sixth most read entry posted during August was "'Pirates of the Caribbean' alignment chart" published August 2, 2015, the first of three alignment charts in this month's overall top ten.  It earned 136 page views, 153 according to the raw counter, by being shared at the science fiction and fantasy groups on Facebook.  The post fell out of the top ten on the last day, as it was the second entry of the month.

It will probably get its due when the fifth (and likely final) movie of the series comes out early next year.

No alignment chart entry of mine would be complete without a fan cover of the theme song.  This time, I return to the YouTube artist I used in the first retrospective entry about alignment charts, Jason Yang with Level Two: The Walking Dead x Terminator.

A soundtrack cover medley of The Walking Dead and Terminator. This is the second episode in my quest to become a film composer! What better way is there to study the soundtracks that I love other than creating my own versions as practice?
...
Original composers:
The Walking Dead - Bear McCreary
Terminator - Brad Fiedel

Stay tuned for another retrospective for Flashback Friday and a gas price/driving update for Saturday.  Only two more entries for April!

Previous entries in this series.
Previous retrospectives about alignment charts.