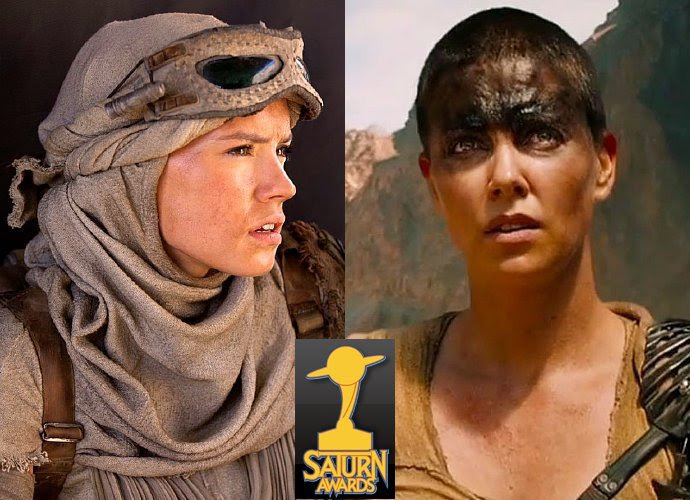 Last Sunday and Monday, I listed the films nominated for this year's Saturn Awards along with my opinions of the nominees and which of them I was likely to vote for.  Today, as I complete the schedule I planned out in that same post, I do the same for the people on the set, the actors and actresses.

I begin with the nominees for lead actor and actresses as listed on the Saturn Awards website and presented in the order given at the Wikipedia page.

I know Leonardo DiCaprio won Best Performance by an Actor in a Leading Role and its equivalent at the Oscars and a whole bunch of other award shows, but I'm not voting for him.  Instead, I'm voting for Matt Damon.  Not only did I enjoy his performance more and think "The Martian" is the much better entertainment experience, but the main argument for DiCaprio, that he was due an Oscar, works even more strongly for Damon, as demonstrated by Walt Hickey at FiveThirtyEight.


But here’s what’s absolutely crazy about this year and the narrative that’s built up around the best actor race. Let’s say DiCaprio deserves an Oscar. You know who deserves one more? Matt Damon, a guy who’s also nominated for best actor this year!

Not only is DiCaprio not the actor most overdue for an Oscar, he’s not even the most overdue among this year’s nominees.

With this electorate, he might not get the award.  Instead, I suspect they'll vote in Harrison Ford for his final turn and best performance as Han Solo.

I've been saying for months that Charlize Theron is my pick in this category, and she still is.  However, she is competing in a strong field and could lose to any of the other nominees, even Daisy Ridley, who will have at least two more shots with this role.

Follow over the jump for the rest of the acting nominees

I don't know yet who I'm voting for, although the best overall actor is probably Michael Douglas, while the default choice is Adam Driver.  Yes, I suspect there will be a "Star Wars" sweep.

My choice is surprisingly easy in this tough field--Alicia Vikander.  As for that "Star Wars" sweep, I expect Carrie Fisher might get the nod from the rest of the voters, but I found Lupita Nyong'o's virtual performance more compelling.

Again, my vote is easy--Jacob Tremblay.  It helps that there is no "Star Wars" actor in this category, although the electorate might favor Ty Simpkins or Olivia DeJonge in films that better fit the main genres being honored.

I'll return with the rest of the movie nominees next Sunday.  In the meantime, I'm sticking with the schedule I outlined in Clinton vs. Sanders for the fifth year of Crazy Eddie's Motie News--"Tax Day on Monday, Drum Corps for the New York Primary on Tuesday, marijuana legalization news for 4/20 on Wednesday, another retrospective for Throwback Thursday, and Earth Day news on Friday."  Stay tuned!
Posted by Pinku-Sensei at 10:57 AM