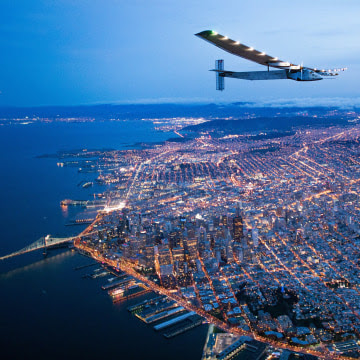 The last I wrote about Solar Impulse 2, the plane had landed in Hawaii.  That was in July.  It took until yesterday for it to complete the next leg of its around-the-world flight.  CNN has the story in Solar-powered plane lands in California.

An experimental plane flying around the world without a single drop of fuel landed in California after a two-and-a-half day flight across the Pacific. Video footage from KGO.

CNN has more in Solar Impulse 2 lands in California after Pacific flight.


An experimental plane flying around the world without a single drop of fuel landed in California after a two-and-a-half day flight across the Pacific.

Piloted by Swiss explorer and psychiatrist Bertrand Piccard, Solar Impulse 2 touched down in Mountain View just before midnight (3 a.m. ET).
...
The plane took off from Hawaii on Thursday, resuming a journey that had stalled on the island of Oahu for almost 10 months.

Tomonews had more about that 10 month day last week in Solar Impulse to set to resume round-the-world journey in late April.

HONOLULU — Solar Impulse 2, an aircraft that is attempting to make the first round-the-world solar-powered flight, is set to resume its journey in late April.

Solar Impulse 2 left Abu Dhabi on March 9, 2015 and had flown to Muscat, Ahmedabad, Varanasi, Mandalay, Chongqing, Nanjing, Nagoya and Hawaii, where it has been grounded since July after its batteries were damaged on the trip from Japan.

The plane's batteries became overheated after a quick ascent on the first day during the flight from Nagoya to Hawaii. The batteries had to be replaced before the plane could resume flying.

"The first half of the adventure was already a success, because we showed that solar energy made it possible to fly five days and five nights, and remaining airborne longer than any plane in history," Bertrand Piccard, one of the two pilots of the plane told The Billionaire.

The plane is ready to depart in late April, depending on the weather. It will continue the remaining half of its journey from Hawaii to North America, southern Europe before returning to Abu Dhabi this summer.

As soon as I watched the video last week, I had a feeling the plane would be flying on Earth Day.  I was right.

Stay tuned for more updates on the plane's circumnavigation of the planet, including its stops in the U.S. and eventual return to Abu Dhabi.
Posted by Pinku-Sensei at 12:00 AM