Dez turned over 51,000 miles on Wednesday April 27th, exactly six weeks after she passed 50,000 miles on March 16th.  That puts it right on the schedule I expected in this month's update for Pearl when I wrote I'll see how much the household is adding to the total when I update Dez at the end of the month."  That means my wife and I drove her car an average of 23.81 miles per day or 726.2 miles per standard month.  That's a lot more than the 9.9 miles/per day or 302.0 (301.98) miles per standard month we drove it between December and March and even more than the 16.67 miles per day or 508.33 miles per standard month we drove the car between October and December.  What increased the mileage so dramatically?  Simple--my wife took the car in for service, then drove to see our daughter in Chicago.  As I wrote in December, "sustainability is a priority, but so is family, and driving while gas is cheap makes keeping in touch more practical."

Combined with the 17.86 miles per day or 544.6 miles per standard month I drove Pearl this month, my wife and I drove a total average of 40.48 miles per day and 1270.8 miles per month.  WOW!  For once, we really are contributing to the trend of increased driving by Americans, as shown by this graph from Doug Short.

As for what the immediate future holds, expect less driving for Pearl over the summer as I have fewer meetings to attend, I drive to only the nearest campus to teach, and I walk more as the weather improves.  That the sidewalk has been extended on the way to the nearest store will help, as does my having a Fitbit.  Nothing like monitoring my activity to induce me to walk more.

Dez will probably be more in line with the 16.67 miles per day or 508.33 miles per standard month she logged between October and December.  Consequently, the family will drive a little less next time.

Follow over the jump for the gas price report.

Thursday was the last day I taught near the old neighborhood this semester, so I used the opportunity to check the stations there one last time this month.  The corner station was selling gas for $2.29, while the two stations down the street were higher for once at $2.32.  I decided that I could get gas cheaper elsewhere.  I went back downtown, a mile to the south, and found a station selling regular at $2.20 credit and $2.15 cash.  I paid cash and filled up Pearl.

GasBuddy supports my decision.  The stations in my old neighborhood were selling gas for 8 to 11 cents above the Detroit average of $2.21, while the outlet I ended up going to was six cents below and the second cheapest in the zip code.  If that's the kind of price disparity I see in May, when I return to the area for meetings, I might stop patronizing the stations in my old neighborhood and reporting on their prices.

The good news is that gas is still cheaper than at this time last year.  Then, the stations in my old neighborhood were selling regular for $2.39 and the Detroit average was $2.44.

Speaking of which, Calculated Risk reported earlier this month that Energy expenditures as a percentage of PCE at All Time Low.

In February 2016, with WTI oil prices averaging $30.32 per barrel, energy expenditures as a percent of PCE declined to an all time low of just under 3.7%. 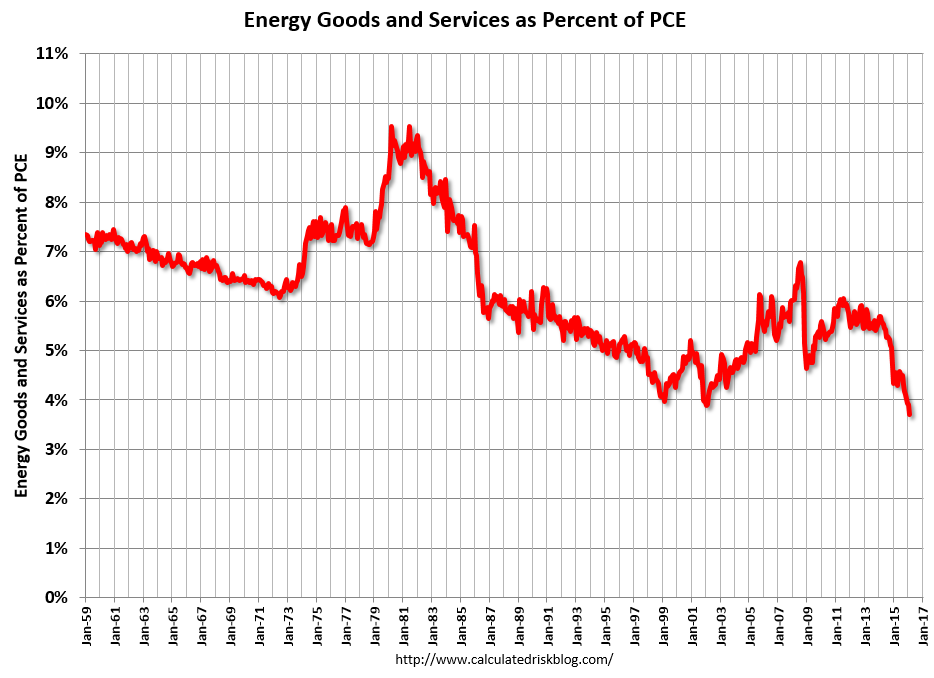 Enjoy it while it lasts.