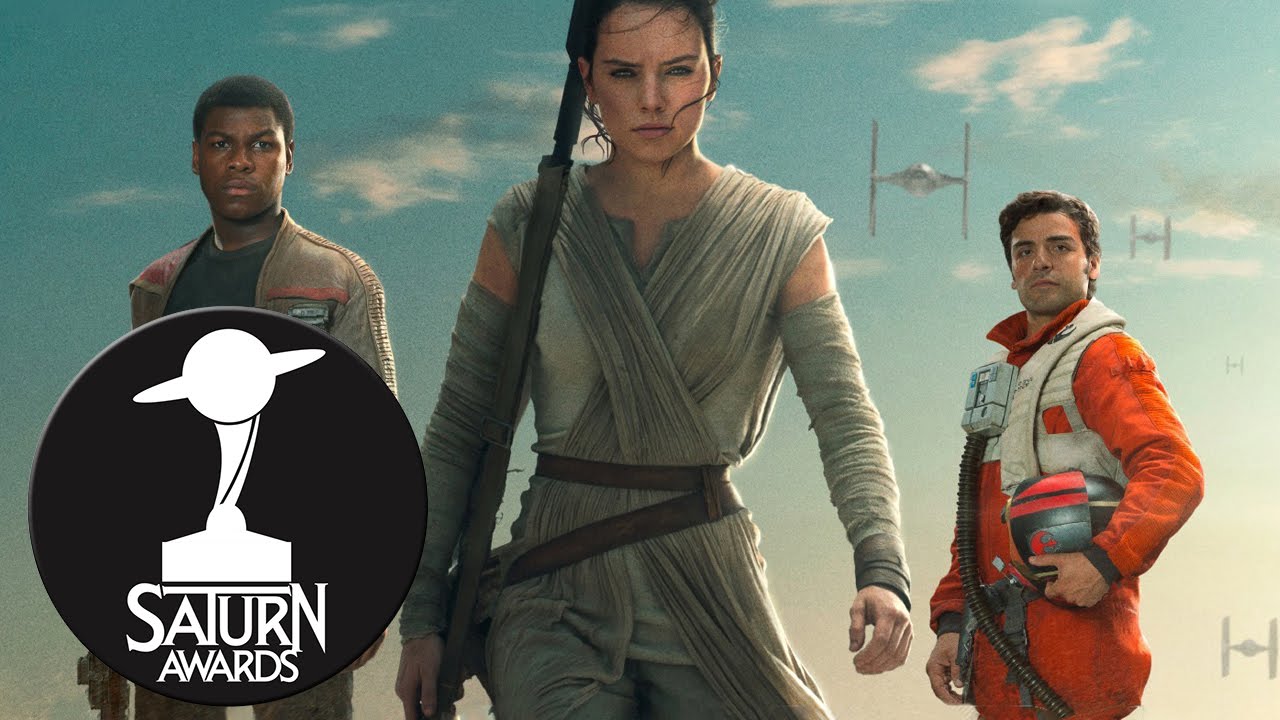 I concluded 2016 Saturn Awards for Television with "I have to say that this past year has been a very good one for speculative fiction and other genre entertainment.  That is even more true with the movies, which I'll write about next week.  Stay tuned."  Next week has arrived and with it my post on the movie nominations.

Like last week, I begin with the 42nd Annual Saturn Awards - Movie Nominations.

VOTE for your favorites, become a Saturn Awards Affiliate Member...
[UPDATE to NOMINATIONS]
Dear Friends of the Saturn Awards:

It has been an exciting time for all genre fans with the release of this year’s Saturn Awards nominations. After careful consideration, we are making an adjustment on our nomination list. We are moving actor John Boyega to the category of Best Actor in a Film. This more correctly reflects his contributions to the success of Star Wars: The Force Awakens. We all look forward to voting and honoring the best in genre entertainment.

I wasn't keeping count, but Wikipedia was, and it found "Star Wars: The Force Awakens" the most nominated movie with 15 nominations.  Among the science fiction films, "Mad Max: Fury Road" earned ten, "Jurassic World" had eight, and "Ex Machina" and "The Martian" each had six.

Follow over the jump for my opinions of the nominees and which ones I currently intend to vote for.

From the Saturn Awards website, here are the nominees, presented in the order given at the Wikipedia page.

What an embarrassment of riches!  I've watched five of these and all five deserve to be here.  The sixth, "Terminator Genisys," I couldn't even bother to write a box office report on, so I posted a video of Tipsy Bartender shooting a watermelon instead.  I might change my mind if I actually watched it, but I suspect that I still might have nominated "The Hunger Games: Mockingjay – Part 2" in its place.

Before I discuss my vote, I'm passing along this anecdote.  My wife and I were watching the Academy Awards and she thought "Star Wars: The Force Awakens" would clean up.  I told her it would be lucky to win one award.  "What?!"  "Seriously, it might win Best Visual Effects and that's it.  It even won't win Best Score."  My prediction astonished her, but I was right.  The movie ended up winning no awards at all.  It lost Best Visual Effects to "Ex Machina", Achievments in Film Editing, Sound Editing, and Sound Mixing to "Mad Max: Fury Road,," and Best Score to "The Hateful Eight."  For what it's worth, "The Martian" also failed to win any of its categories, so "The Force Awakens" was in good company.

At least "The Martian" can point to its two Golden Globes, but the best "The Force Awakens" can point to are the AFI Movie of the Yea, industry awards for sound editing and visual effects, which didn't translate to Oscars in those categories, the Kid's Choice Award for best movie, and last night's MTV Awards with wins for Movie of the Year, Best Breakthrough Performance for Daisy Ridley, and Best Villain for Adam Driver.  The Saturn Awards are its last chance for awards glory, not that it needs any to boost its box office.

I had issues with the television nominations for fantasy shows, but I have even more with the movie nominations.  Unlike the television shows, which reflected confusion over a strong field, the movie nominations look like desperation over a weak one.  For starters, a science fiction film, "The Hunger Games: Mockingjay – Part 2," was nominated.  That doesn't belong here.  "Goosebumps" is more a horror film than a fantasy.  "Ted 2" qualifies in the same way that "The Muppets" do in TV--barely.  That leaves a fairy tale, "Cinderella," a modern drama with fantasy elements, "The Age of Adeline," and a Bollywood historical drama, "Baahubali: The Beginning."  If I want a conventional choice, I'd go with "The Age of Adeline."  However, I might just give "Baahubali" my vote.  It led the fantasy category in nominations with five.  Besides, the English-language nominees look just that weak.

Crimson Peak
Insidious: Chapter 3
It Follows
Krampus
The Visit
What We Do in the Shadows

Like science fiction, this year's horror offerings produced a strong field.  I think all of these deserve to be here.  As for which one I'd vote for, sight unseen, it would be "Crimson Peak."  That led the horror category with eight nominations.  It's certainly the most artistic of the bunch, even if it was a box office bomb. That's because it may not have been the best one for scaring its audience.  Any of "Insidious," "It Follows," "Krampus," or "The Visit" might have that honor.  I'll ask my older daughter, who is a horror fan, which one she thinks was the most frightening.  I trust her taste in this genre.

This is not my category.  I might be tempted to follow the Oscars, where "Bridge of Spies" won for Best Supporting Actor and "The Hateful Eight" won for Best Score.  My other choice would be "Sicario."  Based on nominations, "The Hateful Eight" has five to lead this category followed by "Sicario" with four.  I'll take advice from my readers in the comments on this one and the next.

In a normal year, "Spectre" should kill this category, pun intended.  After all, it won an Oscar, albeit for Best Original Song.  So did "The Revenant," which won Best Director for Alejandro González Iñárritu, Best Actor for Leonardo DiCaprio, and Best Cinematography for Emmanuel Lubezki.  On an artistic basis, the latter should be a favorite.  However, I was rooting against "The Revenant" for Best Picture and hoping either "Spotlight" or "The Big Short" would win ("Spotlight" did), so I won't vote for it here.  Unfortunately, the word of mouth and critical buzz about "Spectre" was that it was disappointing.  If I followed the nominations here, I might go with "Furious 7," which won two People's Choice Awards.  I don't think so.  Therefore, I might vote for the comedy "Spy" instead.  It succeeded as an action film just as much as it did as a comedy and I enjoyed it as both.

Good Lord, I have no idea.  I'll take suggestions in comments.

"Ant-Man" leads this category with six nominations, followed by "Kingsman: The Secret Service" with five and "Avengers: Age of Ultron" with four.  I'd vote for either "Ant-Man" or "Age of Ultron," most likely the latter.  By the way, the absence of "Fantastic Four" while "Attack on Titan" and "The Peanuts Movie" made the list testifies to its awfulness.  It won five Razzies and deserved at least four of them.

Out of this field, I'd vote for either "Room" or "Trumbo," most likely "Room."  It earned a Best Actress win for Brie Larson.

Speaking of actresses, stay tuned for next week's installment, when I plan to blog about the performers.