Drum corps for the Oregon primary 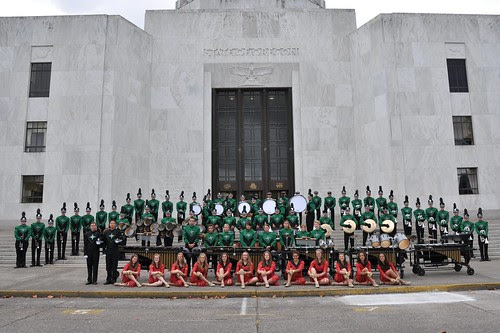 The campaign continues today with the Oregon Primary for both parties and the Kentucky Primary for Democrats.  With Trump unopposed, all the attention is now on Clinton and Sanders.  FiveThirtyEight does not have a forecast for either of today's contests, instead skipping ahead to California and New Jersey in June.  That's because polling has been very sparse.  Real Clear Politics lists only one poll for Oregon, which shows Clinton ahead 48% to 33%, and no polls for Kentucky.  I doubt that poll for Oregon, as do the reporters for the San Diego Union-Tribune, all of whom venturing an opinion predict Sanders will win it.  Three of four of them think Clinton will win Kentucky, but that state is a lot like West Virginia, which Sanders won.  I wouldn't be surprised if he wins Kentucky, too.

Enough of the political analysis.  Time to do what I suggested in the footnote to Solar Impulse 2 lands in Phoenix, post some marching music for my readers to enjoy while they await the election returns.  Today, I feature the Oregon Crusaders, beginning with 2014's Nevermore show.

That's it for this installment of the series.  The big finale will come on June 7, when I feature corps from California and New Jersey, two great drum corps states.
Posted by Pinku-Sensei at 8:17 AM