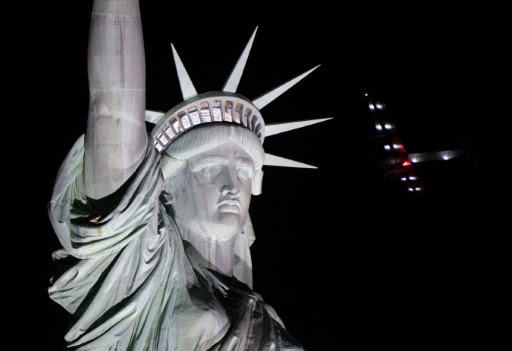 I concluded Solar Impulse 2 in Allentown with this addendum.

Since I wrote the above, CBS in New York reported Solar-Powered Plane Set To Arrive At JFK Airport.  That should happen this evening, possibly after a flyover of the Statue of Liberty.  I'll have an update tomorrow or the day after.

That ended up not happening for nearly two weeks.  Apparently, the final leg of the plane's trip across the U.S. was delayed because of weather.  It finally happened early this morning, when Euronews reported Solar plane sets down in NYC as round the world trip continues.

Solar Impulse 2 has landed in New York after crossing the United States in its historic bid to circle the globe.

The single-seat solar-powered airplane flew over the city and the Statue of Liberty in the Big Apple before touching down at JFK airport at around 4 a.m local time.

The Swiss team flying the aircraft in a campaign to build support for clean energy technologies hopes eventually to complete its circumnavigation in Abu Dhabi, where the journey began in March last year.

Congratulations and good luck on the next leg flying across the Atlantic.  Be ready for the Lucky Lindbergh comparisons.
Posted by Pinku-Sensei at 9:05 AM