'Hunger Games' at the conventions 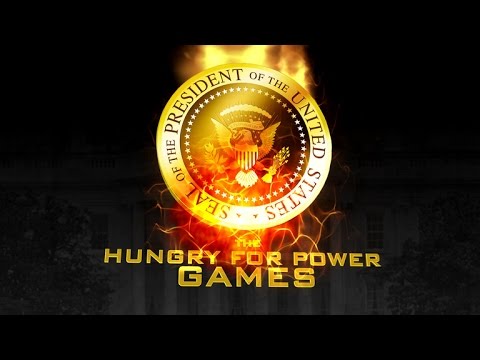 On Tuesday evening, 'Hunger Games' actress Elizabeth Banks made her way onto the stage at the Democratic National Convention through light and fog while a classic Queen song played, just as Donald Trump did on night one of his own convention. While at the podium, Banks went on to say, "Some of you know me from The Hunger Games, in which I play Effie Trinket. a cruel, out-of-touch reality TV star who wears insane wigs while delivering long-winded speeches to a violent dystopia. So when I tuned into Cleveland last week I was like, ‘Uh, hey, that’s my act!’”

Of course, no mention of the "Hunger Games" in conjunction with the election on this blog would be complete without the Hungry for Power Games.  Follow over the jump for Stephen Colbert as Julius Flickerman visiting both conventions.

Julius and his pet weasel Caligula report from the 2016 Republican National Hungry For Power Games at Quicken Loans Arena in Cleveland, where Tribute Trump is set to accept the party's nomination.

Of course, Stephen had to give equal treatment to the Democrats, so here are the Hungry For Power Games: Democratic National Convention Edition.

Julius Flickerman and his pet weasel Caligula are back, descending into the belly of the beast to report from the DNC in Philadelphia.

Looks like the Democrats are better organized and prepared than the Republicans, even when it came to keeping Colbert off the stage.  Par for the course.

*For my readers who didn't get the joke, she's starred in two "Pitch Perfect" movies while directing one of them.  She'll be in "Pitch Perfect 3" next year.
Posted by Pinku-Sensei at 9:17 AM