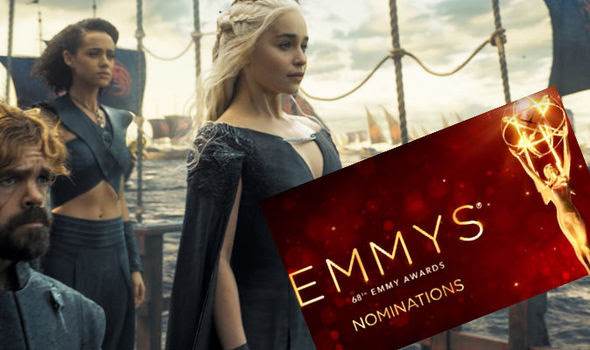 "Next week, the Emmys!"  That's how I ended Speculative Fiction on television at the Teen Choice Awards 2016.  Since it's "next week," it's time to fulfill my promise.

Once again, The Wall Street Journal has the top story in 'Game of Thrones' Grabs 23 Emmy 2016 Nominations.

HBO series 'Game of Thrones' led the way Thursday at the announcement of the nominations for 2016 Emmys, which will take place in September. The WSJs Lee Hawkins discusses some of the other nominees.

Looks like "Game of Thrones" could have two big nights at the Emmy Awards again.  I just hope it doesn't suck all the oxygen out of the air from the rest of the speculative fiction shows nominated, like it did last year.

Follow over the jump for the categories in which the show has been nominated.

From the Los Angeles Times' Complete list of 2016 Emmy nominees, all the categories in which "Game of Thrones" is the only speculative fiction nominee.

It's only competing with "Outlander" in one category.


Outstanding Costumes For A Period/Fantasy Series, Limited Series Or Movie

The other nomination for "Outlander" is for Outstanding production design for a narrative period program (one hour or more), where it will probably lose to "Downton Abbey."

Next, the categories where "Game of Thrones" is competing with "Penny Dreadful."

That's four of six nominations for "Penny Dreadful" that are against "Game of Thrones."  There's also a fifth, where both shows are competing against "The Walking Dead," too.

Finally, there are three categories in which "Game of Thrones" is competing with "Gotham."


Outstanding Sound Editing For A Series

Those are every single one of the nominations for "Gotham."  The Batman prequel might beat "Game of Thrones"  for stunts, but that's about it.  Otherwise, "Game of Thrones" might just suck all the oxygen out of the room for the rest of the speculative fiction shows at the Emmy Awards.

I'll have more on the Emmy Awards tomorrow.  In at least one way, they're better than the Oscars.
Posted by Pinku-Sensei at 11:22 AM