Marble Machine for a Saturday 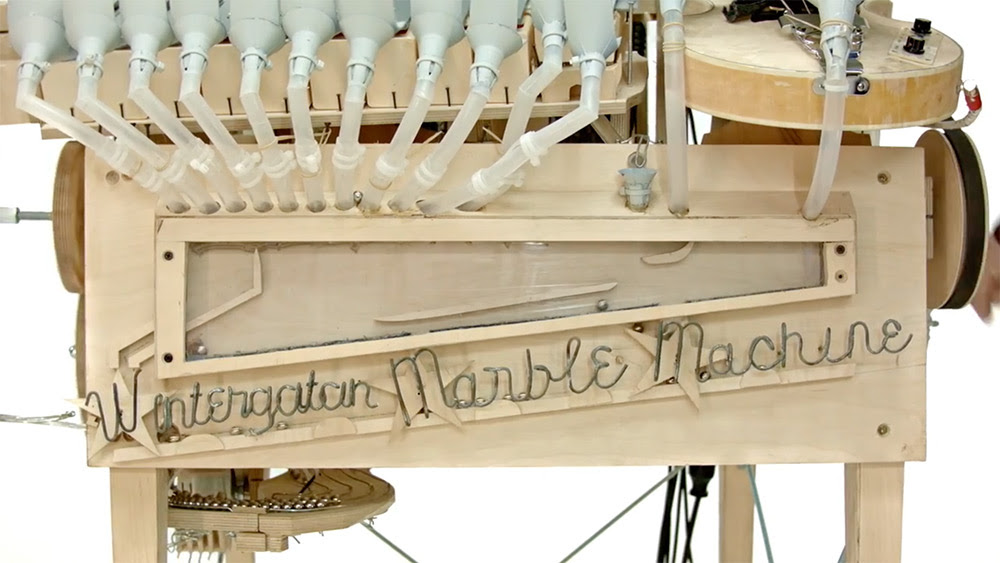 I'm just not feeling up to dealing with either Trump's acceptance speech or Tim Kaine as Hillary Clinton's pick for Vice President today.  Instead, I'm going to succumb to my "I can't be all DOOM all the time" mood and share some ingenious technology in the service of music: Wintergatan - Marble Machine (music instrument using 2000 marbles).

The internet is no stranger to ridiculously complex attempts to make music with technology. But this might be one of the most purely spectacular attempts yet to take something which is now incredibly easy, and make it virtually impossible to comprehend.

The Wintergartan Marble Machine, built by Swedish musician Martin Molin and filmed by Hannes Knutsson, is a hand-made music box that powers a kick drum, bass, vibraphone and other instruments using a hand crank and 2,000 marbles.

The machine has to be seen to be appreciated: with dozens of beautifully carved wooden parts, tracks, pulleys and funnels for collecting and rerouting spent marbles, it's a true work of art. And though marble machines as an art form of their own have a long and complex history, this might be one of the best.

Slate and NPR also have stories on this Rube Goldberg music machine.

Stay tuned for Sunday's entertainment feature, which should be a follow up to Speculative Fiction on television at the Teen Choice Awards 2016, this time about the nominated speculative fiction movies.
Posted by Pinku-Sensei at 9:49 AM