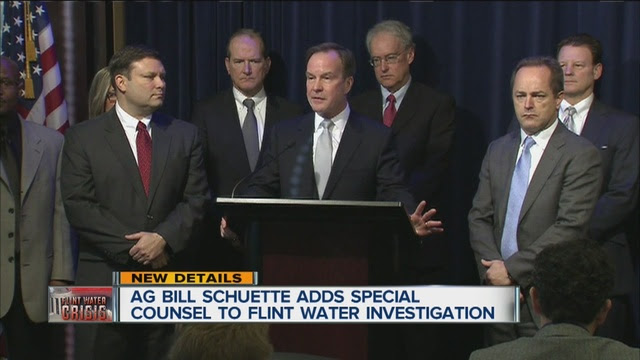 I concluded June's stats and top posts by telling my readers to "Stay tuned for the next installment in the top entries of the fifth year of the blog, picking up where I left off at Drink to candidates for the fifth year of Crazy Eddie's Motie News."  It's tomorrow (barely), so it's time to fulfill that promise.

The eleventh most read entry of the previous blogging year was Michigan Attorney General launches investigation into Flint water crisis from January 26, 2016.  It earned 834 page views according to the raw counter by 11:59 PM on March 20, 2016.  I'll be a good environmentalist and recycle the explanation for how it got most of those page views from Monthly meta for February 2016.

The number one entry during February and the winner of the Revenge of the Back Catalog trophy goes to "Michigan Attorney General launches investigation into Flint water crisis" posted January 26, 2016.  Sharing it at the Coffee Party USA Facebook page earned it 759 page views during February and 819 overall according to the raw counter.  Behold the power of the Coffee Party!

That's a common theme among the top entries of last year.  Kunstler and Greer are becoming less of a factor in determining this blog's top entries, although they still play a part.

Follow over the jump for another top post about a Republican politician I dislike, even if he is good for page views.

In the previous installment of this series, I foreshadowed the next entry.

I'm still not done with Trump.  He'll be one of the subjects of the next installment of this series.  Oh, joy.  Fortunately, it should be the last time this year.  I can hardly wait to see how many of next year's top posts feature him--NOT!

Trump combs in second in New Hampshire poll; hilarity ensues from June 25, 2015 was the fifteenth most read entry of the past blogging year with 515 page views according to the raw counter.  Again, I'm going to recycle what I wrote in Monthly Meta for June 2015.

The second entry about Donald Trump in the top ten was "Trump combs in second in New Hampshire poll; hilarity ensues."  In addition to being the second most read post overall last month, it earned two titles.  First, it was the most read among all entries posted during June with 341 page views according to both counters.  Second, it was the most commented on entry for June with 6 comments.  It achieved all of these through Infidel 753's efforts.  First, he shared it at Crooks and Liars, which attracted 166 visits.  Then he shared it at his own blog for at least another 28 visits.  Thanks, dude!

The entry had legs, as it continued to attract page views past the end of June.  Some of those came from being shared at Greer's blog in July.

The next installment in this series will be about a topic I enjoy much more than either Schuette or Trump--holidays!  In the meantime, stay tuned for an entertainment entry on Sunday.