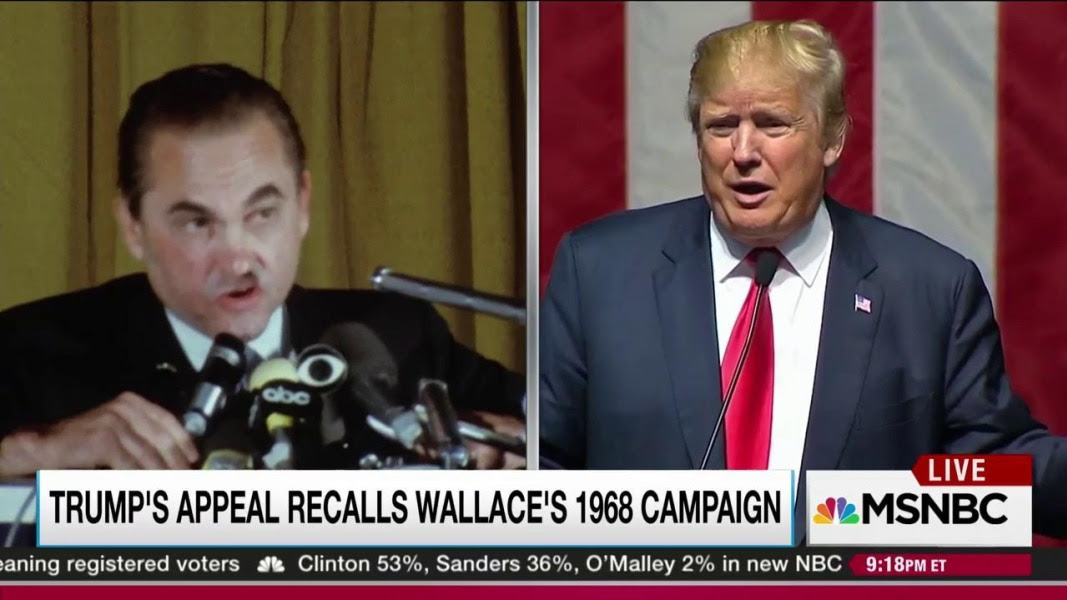 I opened June's stats and top posts with a statement of revulsion and despair.


I'm having a reaction to this week's news much like I did when I posted Grumpy Cat rates this past weekend.  The result was a retreat into life imitating art and three retrospectives before coming up for air.  The most I can say today is that it's still 1968 and the year is only half over.  I might have more to say by Monday.

The idea that we are at 1968 levels of political conflict has become so widespread that it got a lot of attention from the media over the weekend.  Jonathon Chait noted the analogy on Friday at New York Magazine.


It has been especially strained during a presidential campaign in which Republicans nominated a race-baiting demagogue for president. And last night, when a gunman murdered police officers during a Black Lives Matter protest in Dallas, it appeared to reach a kind of breaking point. In the feverish late-night heat, race-baiters at the New York Post, Breitbart, and Matt Drudge stoked a race war they clearly craved. It was 1968 again, more than a few observers said. Everything seemed to be coming apart.

So did Libby Nelson at Vox.


On Wednesday night, a sniper shot 14 people, killing 5, near the end of a protest against police brutality in Dallas. The shooting followed two killings of African-American men by police earlier in the week, and the deadliest mass shooting in American history in Orlando, Florida, less than a month ago.

The sense of instability — plus the chaotic Republican campaign of Donald Trump — brought one comparison to mind for many in the media: 1968.

The superficial parallels are obvious: Shocking gun violence. A nation convulsing over racism and inequality. A chaotic presidential campaign featuring populist candidates who gleefully paint nonwhite people as the enemy.

The reference to 1968 — even, and maybe especially, by people who don’t remember the year themselves — may also be to a national mood. It’s a feeling captured by William Butler Yeats in his apocalyptic poem, The Second Coming: “Things fall apart; the centre cannot hold / Mere anarchy is loosed upon the world.” 1968 is a shorthand for a fear of institutions breaking down, or a fear of new wounds that will leave scars that persist for generations.

There are similar comparisons at Reuters, The Atlantic, The Huffington Post, and Talking Points Memo.  The Reuters piece noticed another similarity besides the mood and level of political conflict.


According to the Chinese Zodiac, 1968 and 2016 are both the Year of the Monkey. But maybe we should call this the Year of the Ghost Monkey of 1968. From the presidential primaries to the convention platform battles to bloody mayhem in the streets, 1968 is the go-to, default metaphor for what we seem to be reliving.

This year, like 1968, is certainly one of bitter conflict and wrenching change.

Yes, nearly all of these articles refer back to 1968.  However, they also make a strong point that things aren't as bad as they were then.  Follow over the jump for the pushback to the meme, including one example of how today actually is worse.


But the old, tattered ideal of unity may be healthier than it seemed. The demonstration in Dallas was the very model of a functioning liberal society — a peaceful protest against police conducted under the protection of the police themselves. Even the most radical of the protesters deplored the shootings, and the police honored the right to protest.

Probing deeper, into more tender spots, one could even detect a formative consensus about the underlying cause of the protest: the routine violence by police against African-Americans. Videos of the murders of Alton Sterling and Philando Castile have not only galvanized African-Americans who have grown accustomed to the constant threat of police brutality, but they also shocked no small number of white Americans.

Vox quoted President Obama, who said Saturday "You're not seeing riots and you're not seeing police going after people that are protesting peacefully.”  That was true then (although the Baton Rouge police did go after peaceful protesters over the weekend, proving the protesters' point about the local police department's brutality and racially disparate treatment of African-Americans).  Vox continued debunking the comparison.


There is no comparison between the level of violence we’re seeing in ‘68 and we’re seeing today. Political violence of the sort we saw in 1968, assassinations of political leaders, it doesn’t happen anymore in this century.


I was 21 in 1967. I had a colleague once who was in the 82nd when it got sent to Detroit that year. He said they were suppressing fire from the buildings with .50 machine guns and 75mm RCLs; nothing else worked."

Back to Vox, which continues with the differences between 1968 and today.


We have much greater racial progress than in 1968. And so when these things happen they shock us in ways they wouldn’t have shocked us 35, 40 years ago. The fact that people are so outraged by what happened in Minneapolis and Louisiana — as it should be — it is a sign of progress.

All of these incidents bring up issues that would have been pushed under the rug 45 years and now they’re things we actually talk about. A lot of Americans have more sympathy for what African-Americans actually have to deal with. In a way, the outrage over it is a positive.

Maurice Isserman at Reuters said the comparison was overblown as well.


Is this 1968 redux? Do we really have to sit through this movie again?

Not likely. Fifty years have indeed changed America. The country is more diverse, ethnically, racially and religiously. There is a far more substantial black middle class than in 1968. (While at the same time the problem of black poverty, and for that matter white poverty, seems more intractable than ever.) Although it’s sometimes hard to remember with all the noise generated by polarizing politicians, the United States is more tolerant than it was a half century ago – when the idea that there would someday be a black president seemed impossibly remote, and the notion of gay marriage unimaginable.

All of the reporters and commentators agreed that that today is not as bad as 1968, in large part because of the social progress that has been made over the past 48 years.  However, they also agreed that if anything is worse, it's Donald Trump.  Here's Vox.


We haven’t seen anybody like Donald Trump in American political history except for George Wallace in 1968 — [someone] willing to engage in political demagoguery, to act like a racist, to act like a misogynist, to act a xenophobe. But I think Trump is worse than Wallace. I think he actually says things that are more provocative and more hateful than even Wallace did.

In 1968, the political system reflected the vast political divide, but the primary divides were inside the parties. In the Democrats it was between the antiwar and prowar Democrats; in the Republicans, between the moderates and the conservatives. Now the divide is between Democrats and Republicans. it feels much more visceral than it did.

But we’re much more sensitive to [race] now. In ‘68, a lot of black Americans wouldn’t have reacted as vocally as they’re doing now, and a lot more white Americans are pissed off about it than would have been in ‘68. All that matters. The bashing of mexican immigrants that you see trump engaging in has led to outrage. The reaction to the violence is a sign of progress.

Josh Marshall at Talking Points Memo picks up on the idea that Trump is the one element of today worse than 1968.


Then there's the entirely other side of the coin.

Why is Donald Trump the presidential nominee of a major political party? As that famous Simpson's line put it about Fox News, Not Racist but #1 Among Racists! The KKK and "white nationalists" say they feel like the tide is turning in their direction for the first time in decades. Perhaps in spite of himself, but even so Trump is re-normalizing the old anti-semitism that had seemed entirely written out of acceptable public life in America. Not 'anti-Semitism' as an attack phrase against people who don't support Israel enough. But real anti-Semitism with global Jewish cabals, hook-nosed cartoons, jokes about ovens and all the rest.

None of this is normal. It requires an explanation.

There are numerous roots of Trumpism, some deep-seated, others entirely contingent. They include economic grievances which are legitimate and real. Yet Trump might plausibly, if not necessarily, be described as a madman. The fact that the general election version of his campaign (which has to the surprise of many been even more outrageous and transgressive than the primary version) struggles to get below 40% in the polls is to a degree a measure of the degree of political polarization in the country - fertile and disquieting ground for another post. But the overriding drive of Trumpism is that a substantial minority of our fellow citizens believes their country, white America, is dying or being taken away from them. This is rooted in the rising demands of African-Americans, tens of millions of new Americans and now their children from Latin America and other parts of the world, and newcomers with a religion that to many signifies alienness, violence and threat.

In a comment to my previous entry comparing today to 1968, I summarized this election's main issue, which helps explain "Why Trump?"


Two decades ago, I expect[ed] elections in this decade to be organized around a single big issue. In 2008, it wasn't. It ended up being about both war and the economy. To a lesser extent, so was 2012. This year's election is, but it's one I didn't expect. All issues have been focused by Trump on approval or disapproval of multicultural America. Ugh. I was hoping it about be about the environment. Maybe in 2020.

Events since then have supported my observation.  I hope they don't also support a main theme of this blog: Progress can be lost.  Here's to working like a Crazy Eddie to preserve our progress, whether it is technological, scientific, economic, or social.

*The 50th anniversary of the Detroit riots is coming next year.  I'm sure I'll blog about it.
Posted by Pinku-Sensei at 9:42 AM