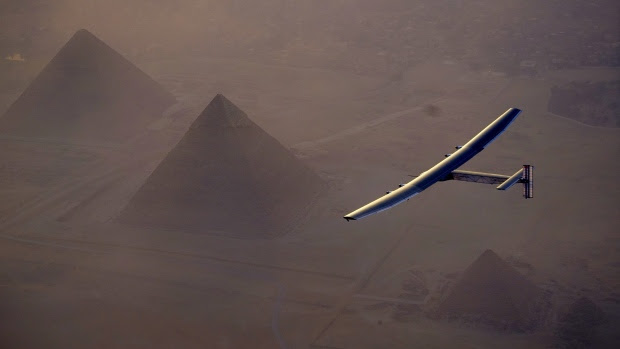 Earlier this month, I wrote that Solar Impulse 2 crossed the Atlantic while I was focused on Brexit.  Today, the solar-powered plane has completed its journey by landing in Abu Dhabi.  Gulf News has the story in Solar Impulse 2 returns to the UAE.

Swiss pioneers Bertrand Piccard and Andre Borschberg have completed the first ever flight around the world in an airplane fueled only by solar power. The aircraft touched down at 4:05 AM on Tuesday bringing to a close the monumental feat after over a year of circumnavigating the globe.

Congratulations on the achievement!

Follow over the jump for the significance of the plane and its journey.

National Geographic describes some of the possibilities in Historic Solar Flight Shows Promise and Challenge of Clean Energy.

“A lot of what they're demonstrating,” Steeves says, “is probably going to be relevant to earth-bound applications before it becomes important to flight.”

Indeed, the plane’s lightweight materials and other components could be used on the road and the power grid. Its super-efficient engine ran on electricity generated from 17,248 solar cells. Special, energy-dense batteries stored sun power so the plane could fly at night.

“Solar Impulse has proved that a 24-hour electrical system, powered exclusively by renewables, is possible,” says Conor Lennon, manager of special projects with ABB, which makes electric transformers, EV charging stations, and other power technology.
...
The plane’s cells are nearly 50 percent more efficient than regular ones.
...
Here again is where Solar Impulse stands for advances that will more likely appear first on the ground, as power plants look to introduce more renewable energy onto the grid while balancing the intermittent nature of the sun and wind.

“We are working to crack the code on how to make solar a baseload provider of energy,” Al Ramahi says.

The plane’s efficient engine can serve as a model for other motors, the Solar Impulse team notes, while its lightweight, extra potent LED lighting and insulation can be used in housing. Its sensors and data-collecting tools, meanwhile, could help inform other types of energy management systems.

And while much of the tech aboard the Solar Impulse may be better employed on the ground for now, the aviation industry is working on similar light materials, smarter controls and other efficiency improvements.

I hope all of that comes to pass.  To a more renewable and energy-efficient future!