Trump threatens to 'Lock Her Up!' 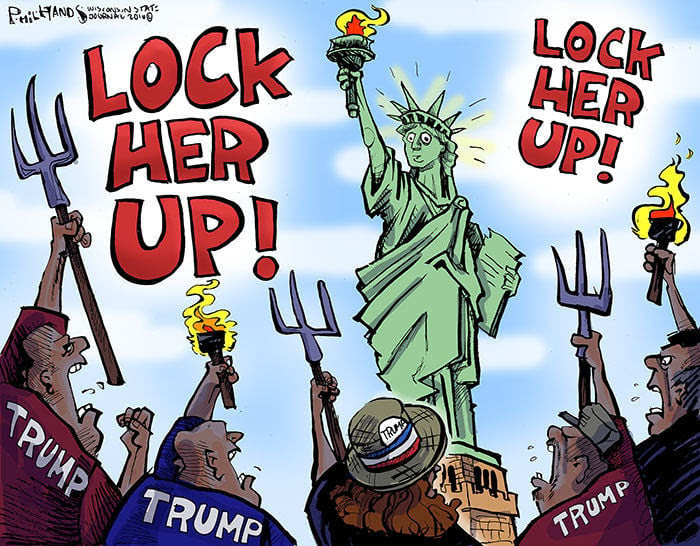 After watching the Republican Convention, I left a comment on The Morning After, Day 2, and Why I Can't Watch 2 in response to P.M. Carpenter.

Christie was another of last night's pseudoconservative luminaries, who also delivered a frothing denunciation of Crooked Hillary, "smil[ing]" as the arena's neofascistic mob "erupted in chants of 'LOCK HER UP! LOCK HER UP!," reports Slate's Michelle Goldberg.

"'LOCK HER UP! LOCK HER UP!'" Given Manfort's history, that takes on a chilling meaning. Here's what Wikipedia wrote about his involvement in Ukraine.

"In 2010, under Manafort's tutelage, the opposition leader put the Orange Revolution on trial, campaigning against its leaders' management of a weak economy. Returns from the presidential election gave Yanukovych a narrow win over Prime Minister Yulia Tymoshenko, a leader of the 2004 demonstrations. Yanukovych owed his comeback in Ukraine's presidential election to a drastic makeover of his political persona and, people in his party say, that makeover was engineered in part by his American consultant, Manafort."

And what did Yanukovych do to Tymoshenko after he won? Lock her up.

After Manafort left the campaign, in part because of his ties to Yanukovych, I felt less worried about such an outcome and decided that I wasn't going to recycle that comment at this blog.  Then Trump threatened to prosecute Clinton over emails at Sunday night's debate.

During the second presidential debate, Donald Trump said that if he wins the election, he will appoint a special prosecutor to look into Hillary Clinton's email "situation."

Eep!  Trump threatened to "lock her up!"  Manafort may be gone, but Bannon and others from Breitbart have replaced him, and they have continued this part of his legacy.  That's another Weimar moment that reinforces the idea that 2016 may not be 1968, but Trump is worse than Wallace.  I'll let Josh Marshall of Talking Points Memo speak for me by explaining what this Weimar Moment meant to him.


I don't think we can discuss this debate as citizens, take stock of it as a country, without noting that this is certainly the first time one candidate has openly threatened to jail the other candidate. Trump said openly that he would instruct the Justice Department to open a new investigation of Clinton and that he'd make sure it ended with her imprisonment. That's something we expect it kleptocracies and thin democracies where electoral defeat can mean exile, imprisonment or death.

Such a ferocious claim, one that puts our whole constitutional order on its head, is not something that can be easily undone. That's the ranting threat of a would-be strongman and dictator The threat itself is like a bell that can't be un-rung. Through the course of what was often an ugly debate, I was thinking a lot of the destructiveness of this entire campaign, virtually all of which stems from Trump's transgressive, norm-demolishing behavior. It's a topic we'll have to return to in the ed blog and one the country is going to need to wrestle with. None of this is going to disappear after November 8th. These are slashing wounds to the country's political fabric that will at best leave tremendous scar tissue we'll still see for decades.

That was an early response and a rather restrained one, although Marshall was rattled enough to forget some of his punctuation.  The next morning, Keith Olbermann unleashed his full fury on the topic in Jailing Hillary!? Trump’s Outrageous Case for Dictatorship.

Floating his new plan to lock up his political rival, Donald Trump borrows a page from the Putin playbook.

Thank you, Keith, for saying everything I was thinking along with everything I should have been thinking.  I've missed you and I'm glad you're back.  It's times like this that I need you and the country needs you, too.
Posted by Pinku-Sensei at 12:00 AM