What if the entertainment professionals voted on the television acting nominations at the Saturn Awards?

It's Throwback Thursday, which means it's only appropriate that follow through on a promise I made in last month's How did my Saturn Awards television submissions fare? O.K., I guess.


I'm almost as displeased at Tatiana Maslany getting snubbed as I was at Eva Green and "Penny Dreadful" being ignored for three consecutive years.  Humph.  I'll plan on writing a post about how these awards would look if the entertainment professionals were in charge of them instead of two people on the Television Committee.  I'll critique the acting nominations there.

I'm going to do the light version of this, which involves postulating what the actors, critics, and other entertainment professionals, along with more dedicated mainstream fans, would nominate in the acting categories given the shows already nominated for this year's Saturn Awards — redoing the show nominations based on insider preferences and then projecting the acting nominations from those would be too much work!  Besides, the data are incomplete.  I won't really know until after this year's Emmy nominations are announced.  I might do the heavy-duty version then.

To determine the hypothetical nominees, I tallied the nominations from eleven awards programs that recognize television acting, the Primetime Emmy Awards, Golden Globes, SAG Awards, Critics' Choice Television Awards, Television Critics Association Awards, Empire Awards, Gold Derby Awards, NAACP Image Awards, Online Movie and TV Association, Satellite Awards, and Awards Circuit Community Awards, as well as the Saturn Awards.  For every program that nominated an actor from one of the shows already nominated, I tallied one point.  I did not count multiple nominations nor did I double points for wins like I did for the most honored political documentaries of 2017.  However, I did do that to resolve ties for the eighth spot, which happened when only one awards program nominated the performer, in which case I used the lifetime number of wins (2 points) and nominations (1 point) on the actor's IMDB page.  In addition, I double counted the Academy Awards, Golden Globes, SAG Awards, and BAFTA Awards, which IMDB lists above all others, so that wins in these awards are worth 4 points and nominations are worth 2 points.  I also moved miscategorized nominees, mostly from Best Actress on Television to Best Supporting Actress on Television, but also from Best Supporting Actress to Best Guest Performance on Television.  After that happened, the top eight point earners become the hypothetical nominees.

I begin with the leading men.

This is not an unreasonable list.  These are all the leading male actors in their shows, all of which deserved their nominations.  The possible exception might be Ricky Wittle; the Broadcast Television Critics Association Awards nominated Ian McShane (Mr. Wednesday/Odin) instead.  Still, while Mr. Wednesday is pulling the strings, "American Gods" is told from Shadow Moon's perspective.  It reminds me of "Pirates of the Caribbean: The Curse of the Black Pearl."  It's really Will Turner's story, but Jack Sparrow hijacks it.

Enough of that aside.  Now for the nominees that my methods produced:

Four actors appear on both lists, Sam Heughan, Jason Issacs, Seth MacFarlane, and Kyle MacLachlan.  The highest rated of them was MacLachlan, who was nominated by four awards shows, so that would make him the establishment candidate among all the actual nominees.  That doesn't mean that he will or should win or even that I'll vote for him.  Recall what I've written repeatedly about these awards: "the Saturn Awards are about entertainment not art, they don't care for subtle, and they love to stick it to the experts."  Speaking of which, look at the actors who other awards shows thought worthy of nominations, Ted Danson, who won Best Actor in a Comedy Series at the Critics' Choice Television Awards, Brendan Gleeson, Ewan McGregor, and Bob Odenkirk.  The last two were the most recognized by other awards shows, including nominations at the Golden Globes, Emmys, and Critics' Choice Awards.  Hah, the Saturn Awards snubbed Obi Wan Kenobi and Saul Goodman!

Remember how irked I was at Evan Rachel Wood and Anthony Hopkins being miscategorized for their roles in "Westworld" at last year's Saturn Awards?  I'm almost that annoyed at Lena Headey and Mary Elizabeth Winstead being nominated as lead actresses when everyone else considers them to be in supporting roles.  As a result, I'm removing them from this category and placing them in competition for Best Supporting Actress on a Television Series.  Here's the resulting field when I do that and use other awards shows' nominations to determine the hypothetical nominees.

Again, half the actual field survives the process.  Of them, the most nominated is Caitriona Balfe.  I was considering voting for her last year, but didn't.  This year, I plan on it.  As for the other four, the most highly nominated were Elisabeth Moss and Carrie Coon with nine and six nominations respectively.  Moss is not alone.  All of the other Emmy winning actresses from "The Handmaid's Tale" were ignored as well.  Talk about sticking it to the experts!  As for Coon, I was trying to get "The Leftovers" nominated in hopes of her being nominated for Best Actress on a Television Series and failed.  Instead, "Fargo" was nominated and she still didn't get recognized.  Coon got screwed twice!  I'd have also liked to see Kristen Bell here.  She deserved it.

Follow over the jump for the rest of the hypothetical fields of nominees. 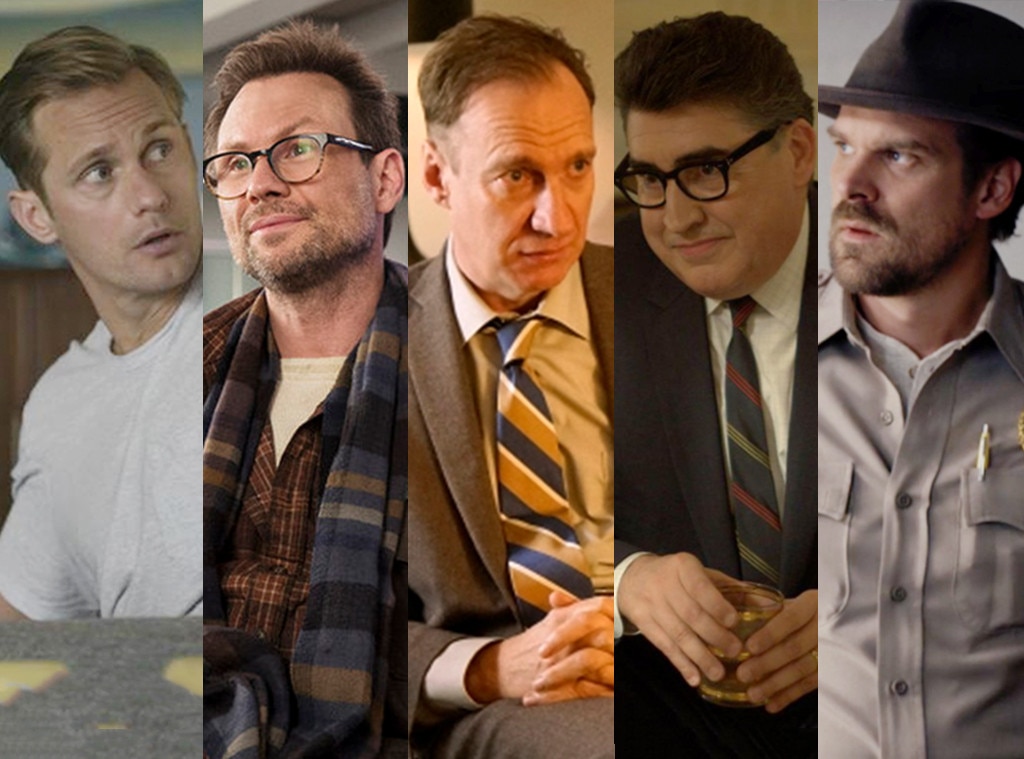 Like the lead actors, this field is properly categorized, so I have not complaints about that.  Also, they're the reasonable choices for the shows the actors are in.  Even so, I'm still running them through the machine to see what a more mainstream selectorate would yield.

The procedure was even more rigorous for the supporting actors than for the leads, as only three of them survived, Kit Harington, Michael McKean, and Even Peters.  Of the three, McKean had the highest score with nominations from the Critics' Choice Awards, Gold Derby Awards, and Satellite Awards.  If I were definitely vote the establishment choice, it would be for him.  As for the actors who the process added, the highest scoring were David Harbour, who 'won the Critics' Choice Award followed by David Thewlis, who played Remus Lupin in the Harry Potter movies.  Nothing wrong with their speculative fiction credentials!

Now for another category in which misplaced actresses played a part.  Here's the list of actual nominees.

Now the hypothetical field after the mainstream awards shows have weighed in and I have moved the miscategorized nominees from the Best Actress on a Television Series roster.

Like the supporting actors, only three members of the original field survive with Dakota Fanning being the highest rated, followed by Danai Gurira  and Melissa McBride.  This is one case where I am voting for the establishment choice, even though Gurira is the only performer nominated for both movie and television roles, as I mentioned in 'Black Panther' vs. 'Wonder Woman' at the Saturn Awards for a late Free Comic Book Day.  She's my second choice.  Also, I moved Lena Headey and Mary Elizabeth Winstead down here where they belong.  As a result, this field has five nominees selected by the Saturn Awards committee.  Not bad.  That written, the biggest snub is Ann Dowd, who joins the rest of the Emmy winners from "The Handmaid's Tale" in being snubbed.  I wonder what the television or acting committees have against "The Handmaid's Tale"? 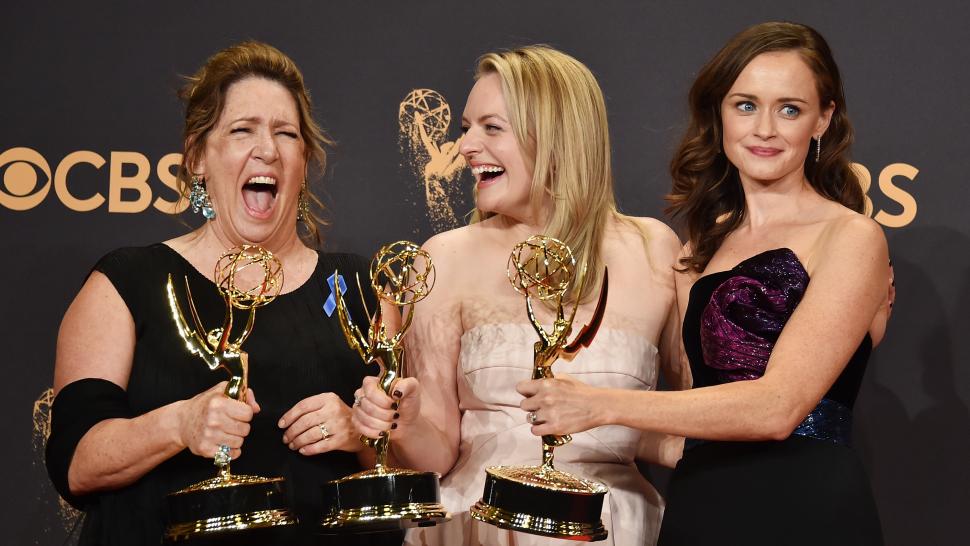 Now for what the Saturn Award electorate, but not necessarily The Television Academy, consider to be guest performers.

Many of these performers are really supporting actors for the seasons of the shows they were in, but I found that removing them did not leave enough actors to fill the field, so I left them.  Instead, I just ran them through the same process as everyone else.  Here is what resulted.

Most of them survived.  The highest rated of them was Bryan Cranston, a multi-Emmy winner.  Joining them were Alexis Bledel, Gillian Anderson, and Jada Pinkett Smith.  Bledel earned the highest score, making her the third Emmy-winning actress from "The Handmaid's Tale" to be snubbed.  As for who I'm casting my vote for, it's Michelle Yeoh.  She's more of a guest star than Jeffrey Dean Morgan, who I voted for last year. 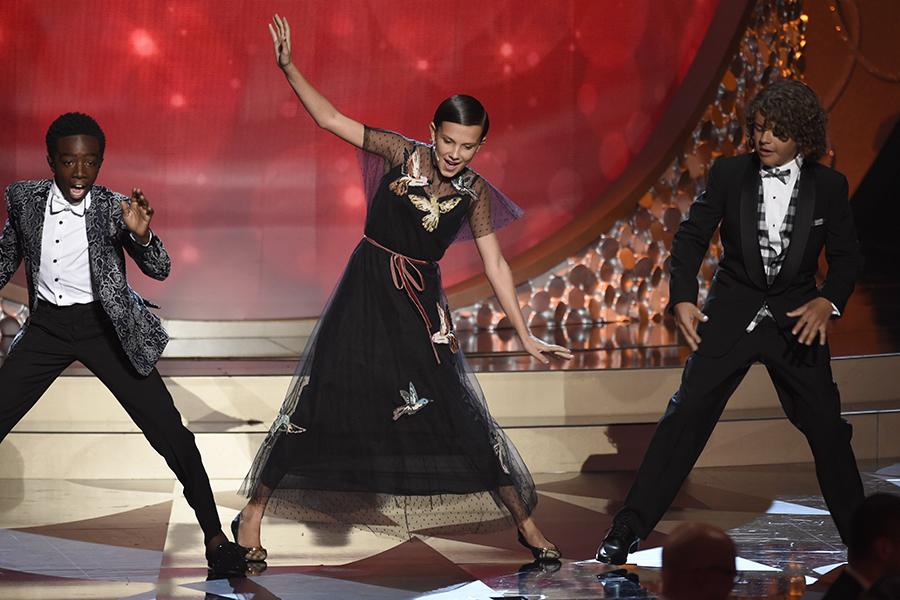 I didn't do much to the final category.


Best Performance by a Younger Actor on a Television Series:

As I noted above, I only added one performer, as the tiebreaker didn't break the eighth-place tie.

I could have moved Millie Bobby Brown to Supporting Actress, which is where the mainstream awards shows have her.  That would have reduced this field to eight and knocked out Melissa McBride.  I could have lived with that, but decided it was better to keep her in the young performer category.  She's the returning winner and the one I'm voting for.

Before I conclude, I want to note the effect of using the more mainstream choices on diversity of the nominees.  The original fields have seven people of color, eight if Ricky Whittle counts.  The hypothetical mainstream nominees include only five people of color, even after adding Caleb McLaughlin, Jada Pinkett Smith, and Samira Wiley.  Only Danai Gurira and Michelle Yeoh survived.  That means that the Saturn Awards did a better job of promoting inclusion and diversity than the mainstream awards shows did given the nominated shows.  On that note, I won't complain about the acting nominations any more.