My Saturn Award television submissions for 2017-2018 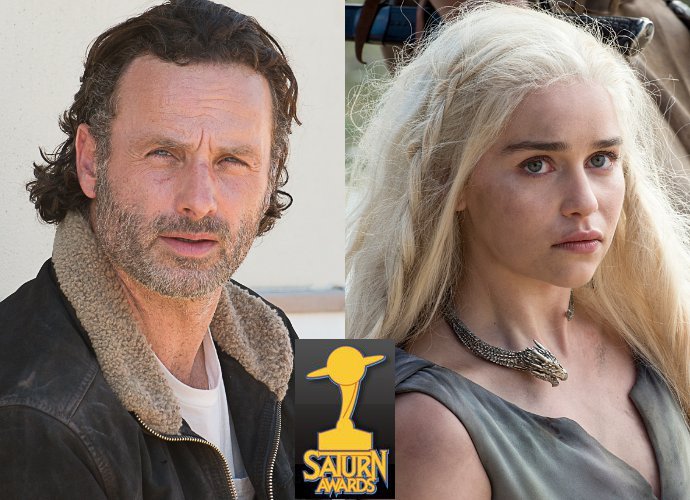 I admitted that the list of suggested TV shows for the Hugo Award recognizing Dramatic Presentation, Short Form in 'Get Out,' 'Logan,' and 'The Shape of Water' among nominees for the Ray Bradbury Award for Outstanding Dramatic Presentation was an attempt to work the refs, as I am not a Hugo voter.  I am, however, a Saturn Awards voter, so when I told my readers to "stay tuned for my television submissions for the Saturn Awards" at the end of that same entry, I was warning my readers about an even more direct attempt to work the refs.  It began when I noted the following passage in The Saturn Awards Voting Procedures

Any specific television program may be submitted to the organization for award consideration.  Although we do not require submission fees, we ask anyone submitting a program to become a member of our organization.

Since I was an Associate Member last year and will pay again to retain that status this year, I believe I qualify to submit television shows for consideration.  So I did.  Follow over the jump for my submissions and my opinions of their likelihood of getting in.

I substituted "American Gods," "Once Upon A Time," and "The Leftovers" for "Beyond," "Preacher," and "The Magicians," which were the nominees last year.  I'm pretty sure "American Gods" will replace one of them and Gillian Anderson is nominated for her role as Media in addition to her role as Dana Scully in "The X-Files."  I suspect "The Leftovers," critical success though it is, will be snubbed in favor of "Preacher," which really belongs under horror.   I think that would be an injustice, but at least I tried.*  I hope my submission is transmitted to the acting committee so Carrie Coon is nominated for Best Actress on Television.  As for "Once Upon A Time," that was just a personal preference.  "The Magicians" might actually be better and will almost certainly be renominated.  Finally, I submitted "Game of Thrones," "Lucifer," "Outlander," and "The Good Place," all of which would be returning nominees.  Last year, I voted for "Lucifer."  This year, it will be "The Good Place."

Last year's winner, "Westworld," was not eligible, so one slot, as well as the title, are open.  I decided to fill it with "Orphan Black," which I submitted mostly to influence the acting committee to include Tatiana Maslany among their nominees for Best Actress on Television.  "Incorporated" was cancelled, so I replaced that with "12 Monkeys," which, much to my surprise, has never been nominated before.  I went back and forth on "The 100" and substituted "The X-Files."  In retrospect, that was a mistake.  The current season of "The X-Files" is not that good and I should have submitted "Timeless," one of last year's nominees, instead.  I submitted both "Star Trek: Discovery" and "The Orville" even though the status of "Star Trek: Discovery" is uncertain; the first two episodes were aired on CBS as a network show, while the rest of the season was streamed on CBS All Access.  It's up to the selection committee to determine where it goes.  Finally, "Colony," "Falling Water," and "The Expanse" are returning nominees and "The Expanse" won Best Dramatic Presentation, Short Form at last year's Hugo Awards.  As for which one I'd vote for, it depends on which shows are nominated.  It will probably go "Star Trek: Discovery," then "Colony," then "The Expanse," then either "Falling Water" or "12 Monkeys."

I decided to give two of my favorite shows that departed last year, "Grimm" and "Sleepy Hollow," a sendoff by submitting them, listing them instead of "Teen Wolf" and "The Vampire Diaries," which I don't watch.  I also decided that "Supernatural" deserved a nomination instead of "The Exorcist."  All three, by the way, had been nominated in previous years, so this isn't as vain a hope as submitting "The Leftovers" in fantasy, even though I think the latter is both more worthy and less appreciated.  I put "Twin Peaks" here because it's one of those shows that is definitely speculative fiction, but which kind is not easily determinable.  It probably belongs under Action/Thriller and I wouldn't be upset if it ends up there or under Presentation, where it really belongs according to all the other awards shows along with "American Horror Story" and "Channel Zero."  Just the same, I'd prefer it to "Ash vs. The Evil Dead."  If I want campy zombies, I'll vote for "Z Nation" instead.  Speaking of voting, I'm sure both "Fear the Walking Dead" and "The Walking Dead" will be renominated.  I'll vote for "The Walking Dead" again and it will continue its winning streak in this category.

This is the category I thought was most in need of new submissions.  Of last year's nominees, I only returned "Bates Motel," "Designated Survivor," "Mr. Robot," and "Riverdale," the last of which I only submitted because of its seven wins at the Teen Choice Awards.  I took a look at "Animal Kingdom" and "The Librarians" and saw no one else besides the Saturn Awards giving them nominations, so I struck them from my list.  Even though I like "The Librarians," the show doesn't belong here; it's a fantasy show, but it isn't as good as any of the seven shows I submitted in that category.  In their places, I submitted "Black Sails," "Homeland," and "The Americans," the first and third of which have been nominated for Saturn Awards before and the second of which was once the best show on television.  In retrospect, I should have deleted "Bates Motel" and resubmitted "Underground."  That's a show that deserved its nomination last year.  Speaking of last year, I voted for "Mr. Robot" then and will probably vote for it again unless the committee puts "Homeland" on the ballot.  My wife and I really like that show.

The returning winner is "Stranger Things," which I voted for last year and will probably vote for again unless "The Handmaid's Tale" strongly impresses me.  It's also the only returning show on this list.  "A Series of Unfortunate Events," "Daredevil," "Marvel's Luke Cage," and "The Man in the High Castle" did not stream episodes during the eligibility period, although "A Series of Unfortunate Events" will return next month, and I'm not a fan of "Bosch," so I submitted an almost entirely new list of shows.  In addition to "The Handmaid's Tale," the show that I really hope makes the list is "Black Mirror," even though the episode "USS Callister" really belongs under Presentation (miniseries and TV movies).  As for the rest, "The Punisher" is a shoe-in, "Altered Carbon" has a good chance, "Future Man" would probably play well with the Saturn electorate, and "The Tick" is fun but probably a bit overrated.

This is the category where I had the least idea of what shows to nominate, as a lot of shows that really belong here, like "American Horror Story," "Black Mirror," and likely "Channel Zero" and "Twin Peaks," will be nominated as series instead.  So, I decided to make leaps of faith by nominating miniseries about science and scientists instead.  If "Hidden Figures" deserves to be nominated and win as an Action Movie, then "Genius" and "The Immortal Life of Henrietta Lacks" deserve nominations.  If "Mars" deserves to be nominated for Best Presentation on Television, then "Year Million" does as well.  As for "The Alienist," that will receive recognition at the Emmy Awards this summer and the Golden Globes and guild awards this coming winter, so the Saturn Awards may as well get a jump on it.  I know it's the show I plan on voting for if it makes the list.  "Doctor Who" probably deserves to be recognized under Science Fiction Series, but I decided to submit the Christmas Special instead here.  "Happy" is the kind of show that the Saturn electorate would like.  Finally, my confusion about what to nominate for the last two slots led me to suggest two Netflix movies.  They will probably be nominated under Fantasy Film or Action Film, but I just wanted to give the committee something to think about.  I should have suggested "Emerald City" for the final slot, but it didn't occur to me in time.  Here's to hoping someone else suggests it.

"Star Wars Rebels" won last year and would have a difficult time with "Rick and Morty" and "Samurai Jack" except for one thing.  It doesn't look like the Saturn Awards will recognize this category this year.  The list of last year's winners on the site (this will disappear on Saturday, March 3rd) doesn't show it and the membership page doesn't list it, either.  Darn.  I thought this was a worthy category and it was worth seeing what science fiction fandom thought was a good show.

Stay tuned for the winners of the Makeup and Hair Stylists Guild Awards followed by a celebration of Purim.

I conclude today's' entry with an image I should have used last year for the Star Trek nominees at the Saturn Awards.

*If I had known about this method of submission, I'd have submitted "Penny Dreadful" for consideration under horror series last year in the hopes that the series would have been listed as one of the nominees and Eva Green would have been listed as a nominee for Best Actress on Television.  I'd have gladly voted for her instead of Kim Dickens.
Posted by Pinku-Sensei at 1:52 PM