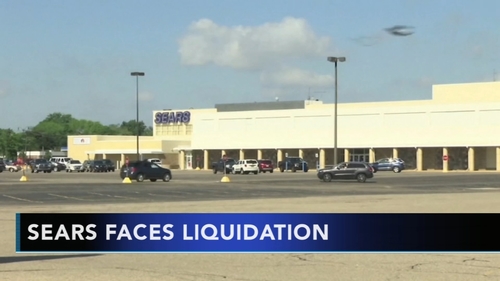 I wrote that I was planning on writing about the likely deaths of Sears and KMart today after asking is JCPenney the next Sears?  It's time to follow through by sharing WXYZ's report from December 28th of last year that Sears to close 80 more stores.

Sears has announced that it is closing the store location at Twelve Oaks Mall in Novi. The company is set to close 80 more stores across the country.

The end was not as nigh as the WXYZ report made out, as CBS Philly reported that night that Sears Wins Reprieve From Liquidation.

Sears may have been saved from liquidation just hours after announcing the closure of more stores.

The report extended the lifespan of sears by two weeks.  In doing so, it put my prediction that "the Twelve Oaks Mall location in Novi...would be open until the entire chain goes under" in jeopardy.  That would be especially so if the bid is accepted.  However, CNBC places that in doubt, reporting It's lights out for Sears on Tuesday unless Eddie Lampert can sweeten his bid.

Sears and its chairman, Eddie Lampert, have been so far unable to resolve disagreements over his $4.4 billion bid to save Sears and 50,000 jobs by buying it out of bankruptcy through his hedge fund ESL Investments, people familiar with the situation tell CNBC.

Sears continues to inch toward liquidation, even while leaving Lampert room to have a last-minute about-face. Sears advisors this past Friday had told the bankruptcy judge it planned to announce a liquidation on Monday, one of the people said. By Sunday afternoon, Sears had decided it would give ESL until Tuesday morning before coming to and announcing a conclusion.

ESL's advisors worked through the weekend and into Monday. So far, Lampert's bid is insufficient. If he doesn't agree to concessions, the company will liquidate.

I have a feeling that Sears may go into liquidation today.  If so, this really was the last Christmas for Sears, which means I would be right when I wrote "Sears and KMart are not dead yet...but it probably won't be long."  In that case, my prediction that the Twelve Oaks location will be open until the entire chain goes under will turn out to be correct.  In this case, I'd almost rather be wrong.

I'll have more tomorrow on Fast Eddie Lamprey's rescue effort, regardless of how it turns out.  Stay tuned.
Posted by Pinku-Sensei at 12:00 AM