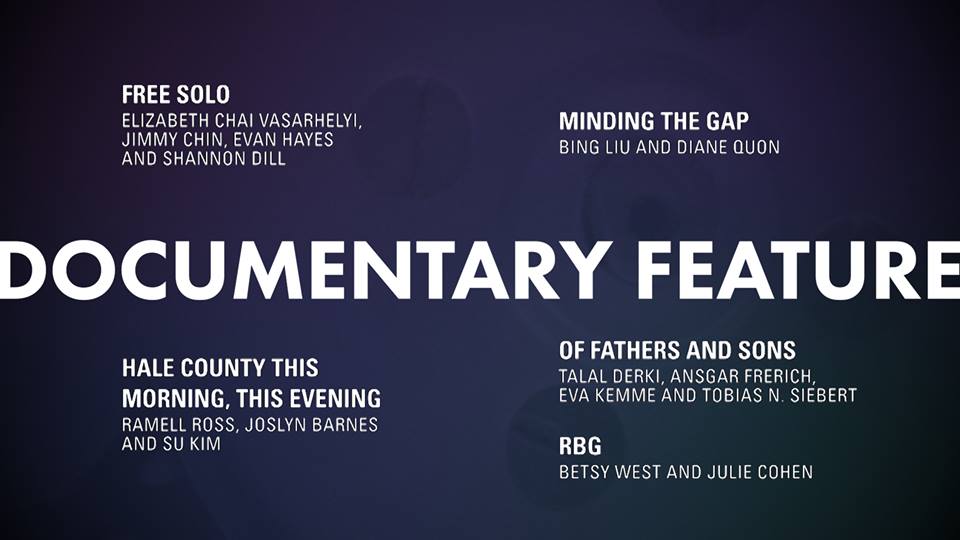 When I told my readers to "Stay tuned for the entry I've planned on writing about the Oscar nominees I've been promising," I wasn't sure what I'd write.  It turns out that I'm following up on what was more a hope than a prediction for "RBG" in 'RBG' wins Best Political Documentary, 'Won’t You Be My Neighbor?' Best Documentary: "I am rooting for it to earn an Oscar nod for Best Documentary Feature."  I got my wish.  Watch 91st Oscar Nominees: Documentary Feature.

It should come as no surprise that I'm rooting for "RBG."  Given the kind of electorate that voted for "Icarus" as Best Documentary Feature last year, I also think it's the favorite.  It helps that it's the only documentary with a second Oscar nomination, which is for "I'll Fight" as Best Original Song.  Those are the same two categories that "An Inconvenient Truth" won.  That's a good precedent, although I don't think "RBG" will win original song.  As I predicted for the 2019 Grammy Awards and the 2019 Golden Globes, it's between "Shallow" and "All the Stars," with "Shallow" being the favorite.

I am also not surprised at the nominations for “Free Solo” and “Minding the Gap,” as I wrote about both movies in 'Dark Money,' 'Hitler's Hollywood' and 'RBG' lead Best Political Documentary nominees at the 2018 Critics' Choice Documentary Awards.  I think "Free Solo" is the better movie, but "Minding the Gap" has more social commentary.  If one wanted a non-political choice, "Free Solo" is the one I'd pick and the movie I expect has the best, if not good, chance against "RBG."

I thought the final two nominations would be for "Won’t You Be My Neighbor?" and "Three Identical Strangers," but both were snubbed.  I am not surprised; the Documentary Branch snubbed "Jane" last year, even though I thought it was the second-best documentary of 2017.  In the comments to the YouTube video above, user Connor Webb made the following observation.

That's what I think about both "Jane" and "Won’t You Be My Neighbor?" not being nominated.  They would have won if allowed to be put before a vote of the full academy membership, so they weren't nominated.  I hope both get an opportunity at the Emmy Awards.  That certainly will happen for "Minding the Gap," which is on Hulu.

I'll have more about the Oscar nominees as well as the winners of other awards shows, beginning with the SAG Awards, which take place tonight.  Stay tuned.
Posted by Pinku-Sensei at 6:55 PM