The shutdown is disrupting American science 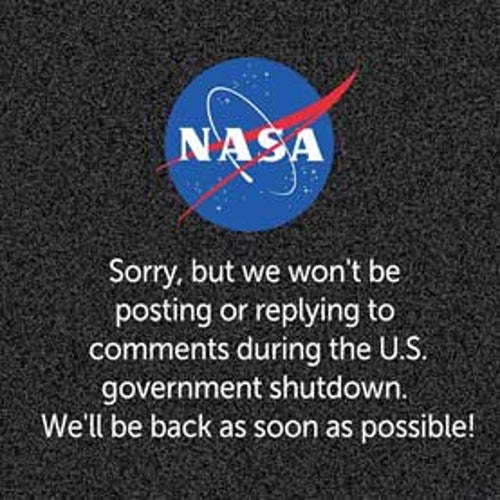 While Sears Holdings, JCPenney, and Macy's are contracting in the face of the Retail Apocalypse, the partial government shutdown over funding for Trump's border wall.  I could write a post for every day that it has lasted and not run out of bad things to say about it.  I'll start by sharing the following segment from PBS NewsHour, With the government shutdown, American scientific progress is disrupted.

Even scientists who don’t work for the government, but receive federal money for research and grants, are among the hundreds of thousands of Americans affected by the government shutdown, now in its 19th day. That means important work and research may be put on hold, or even canceled. William Brangham talks to Rush Holt, CEO of the American Association for the Advancement of Science, for details.

This is all awful, but the worst part is that we've seen this all before and knew exactly how it would play out for science.  Seeker/DNews uploaded The Impact of the Gov't Shutdown on Science in 2013 and it works almost as well for the current impasse.

A full government shutdown is in effect here in the US. And it's having a pretty significant impact in the science world. Trace details that impact, and explains its potentially long-lasting effects.

For good measure, I wrote about the effects of the 2013 shutdown on science, which was shorter than the current one, in Shutdown and science from campuses on the campaign trail and Daily Kos.  Almost all of that could be reused now.  So could Effects of the shutdown from local news, in which I wrote "one week of shutdown takes 0.1% off the GPD for a quarter."  That's still true and it could speed up the arrival of the next recession, which I predict will begin in the second half of this year.  Yikes!

ETA: As I was writing the above, DNews/Seeker uploaded a video updating the one I used from six years ago, How a Government Shutdown Screws Up Scientific Research.  Here it is.

Thousands of scientists were sent home on temporary non-paid leave, what does it mean for the research they had to leave behind?
...
Toll on Science and Research Mounts as Government Shutdown Continues
“A shutdown has these cascading effects on the scientific work of the organization,” said Daniel M. Ashe, a former director of the Fish and Wildlife Service. “They’re hard to foresee or predict right now, but they’re crippling, really, and they affect the organization not for three or four weeks, but for the rest of the year because of all of this complex orchestration of field work.””

Another Casualty of the Government Shutdown: Hurricane Preparedness
“EMC, the Environmental Modeling Center—they’re the main point of contact for improving the Hurricane Center models, and really the Weather Service model in general. And that organization is basically furloughed; there's very few staff working now. Every fiscal year they set out to improve [some] model, and they have timetables to meet. And now we’re in the third week here. Delays for a day or two—that can easily be absorbed. But the longer this goes on, the more likely it is to have negative consequences down the line.”

Government Shutdown Causes Slowdown In Scientific Research
“It does have a lingering impact because a lot of this work is work that's ongoing at such an incredible pace right now that interrupting that really sets a lot of that work back. And also, just recovering from the lost opportunities for people to get together, it's going to take some months to really be able to rebuild some of those opportunities in new and different ways.”

Almost perfect timing on Seeker's part.  As for the shutdown, the new video shows that it's even worse than I thought.
Posted by Pinku-Sensei at 8:43 AM