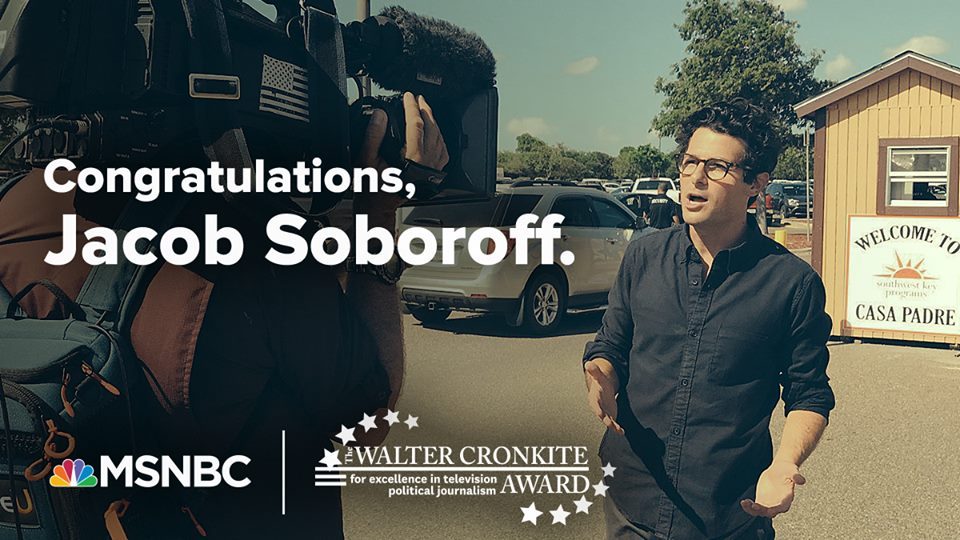 The resignation of Kirstjen Nielsen yesterday helped me make up my mind about which winner of the Cronkite Awards to feature next.  Watch the University of Southern California Annenberg School for Communication and Journalism's compilation of clips featuring Jacob Soboroff of MSNBC covering the effects of the Trump Administration's family separation policy.

Jacob Soboroff (NBC News/MSNBC) was one of the first national reporters to break the story on conditions of children separated from their parents at the border under the Trump administration’s zero tolerance policy. Though cameras were not allowed into detention centers, Soboroff was able to explain the situation “with clarity and descriptive analysis that was as powerful as any visual,” the judges said. He kept the story on the nation’s agenda, he stayed with the story, and his coverage had impact: it helped push the Trump administration into a rare policy reversal.

Congratulations to Soboroff and keep up the good work documenting this cruel policy.  Unfortunately, this policy may not have been cruel enough for Trump's liking.  As the New York Times warns its readers, Kirstjen Nielsen Enforced Cruelty at the Border. Her Replacement Could Be Worse.


Ms. Nielsen’s departure is seen by some as part of a broader restructuring of her department. Just two days before meeting with the secretary, the president withdrew his nomination for the next head of the Immigration and Customs Enforcement agency, saying that he wanted to go in a “tougher direction.” Presumably he plans to chart a similar course with Ms. Nielsen’s successor.

For now, Ms. Nielsen’s acting replacement will be Kevin McAleenan, the commissioner of Customs and Border Protection. This leaves Homeland Security without a top official at either of its critical immigration agencies. It comes as the swell of migrant families across the border pushes the system toward collapse.

Within this leadership vacuum, it seems likely that more influence will be exerted by Mr. Miller, who inspires and reinforces Mr. Trump’s harshest ideas on immigrants and immigration.

The House speaker, Nancy Pelosi, said of Ms. Nielsen’s departure, “It is deeply alarming that the Trump administration official who put children in cages is reportedly resigning because she is not extreme enough for the White House’s liking.”

If you are someone who thinks that the cruelty of these policies are counterproductive, as I do, you need to be reminded of what Adam Serwer wrote in The Atlantic: The Cruelty Is the Point.  That's a chilling thought.

Previous entries about the Cronkite Awards.