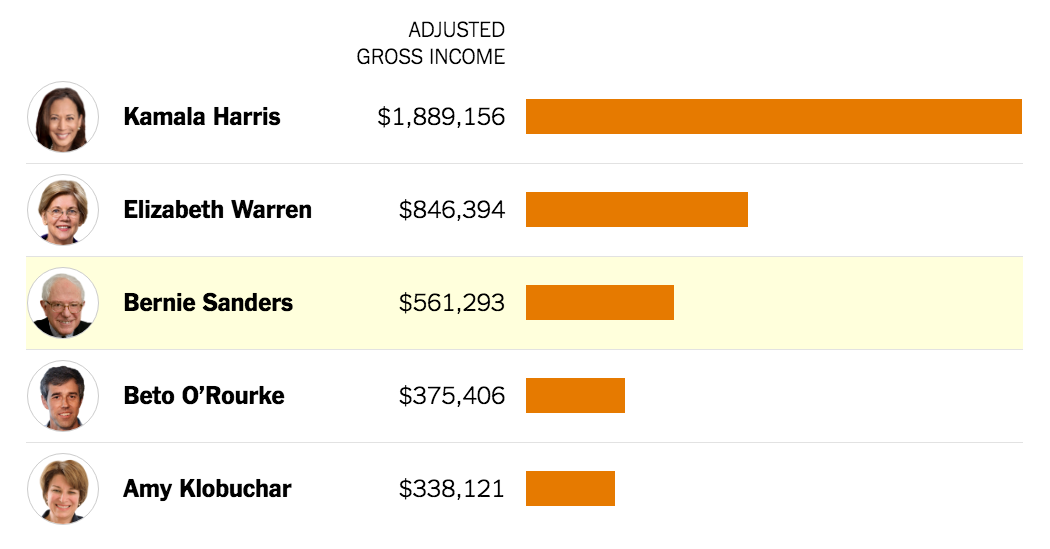 For the past two years, I was able to find lots of news videos of Tax Marches on Tax Day.  This year, either the tax marches themselves or their coverage were way down.  When I looked on YouTube, the only news report I could find on tax protests was Tax Day protest in Binghamton, New York.


I know I promised to write about tax protests today in Vox explains tax reform for Tax Day plus taxes and economics for the eighth year of Crazy Eddie's Motie News, but tax marches and tax protests don't seem to be where the action is.

That is not to say that they didn't have an effect.  One of the focuses of previous Tax Marches was protesting President Trump not releasing his tax returns.  Those protests haven't budged Trump, but they are getting the candidates for the Democratic nomination to release their tax returns.  The most famous is Bernie Sanders.  Watch Bernie Sanders Releases 10 Years Of Tax Returns.

U.S. Democratic presidential contender Bernie Sanders released 10 years of tax returns on Monday, providing details of his growing status as a millionaire fueled by a sharp jump in income from book royalties since his losing 2016 White House run.

I think this is a positive step, but CNN took it as an opportunity for criticism.

Sen. Bernie Sanders (I-VT) released a decade of tax returns, providing new insight into how the senator became a millionaire during his two presidential runs.

Wow.  I wrote "I think they are right to consider CNN biased, but I think it's a personal bias against Trump, not an ideological bias against conservatives" in A comparison of two measures of media bias, the Booman Tribune version of A comparison of two measures of media bias shows readers and viewers respond to both ideology and quality.  I think CNN, or at least Erin Burnett, has a non-partisan but personal bias against Sanders, too.  Her guests showed that, too, as she had Sanders critics from both left and right, befitting Ad Fontes Media's rating of her show as "Neutral or Balanced Bias."

The other candidate who released tax returns this week was Kamala Harris, which Newsy reported in Harris releases 15 years of tax returns.

The 528 pages add up to more than any other 2020 candidate has released so far.

As the image from the New York Times that I used to illustrate this entry shows, the American voters may not be getting transparency on Trump's finances, but we are getting it from at least some of his rivals.  I'll leave it to Congress and the courts to get that from Trump.  He certainly won't do it on his own.
Posted by Pinku-Sensei at 9:19 AM