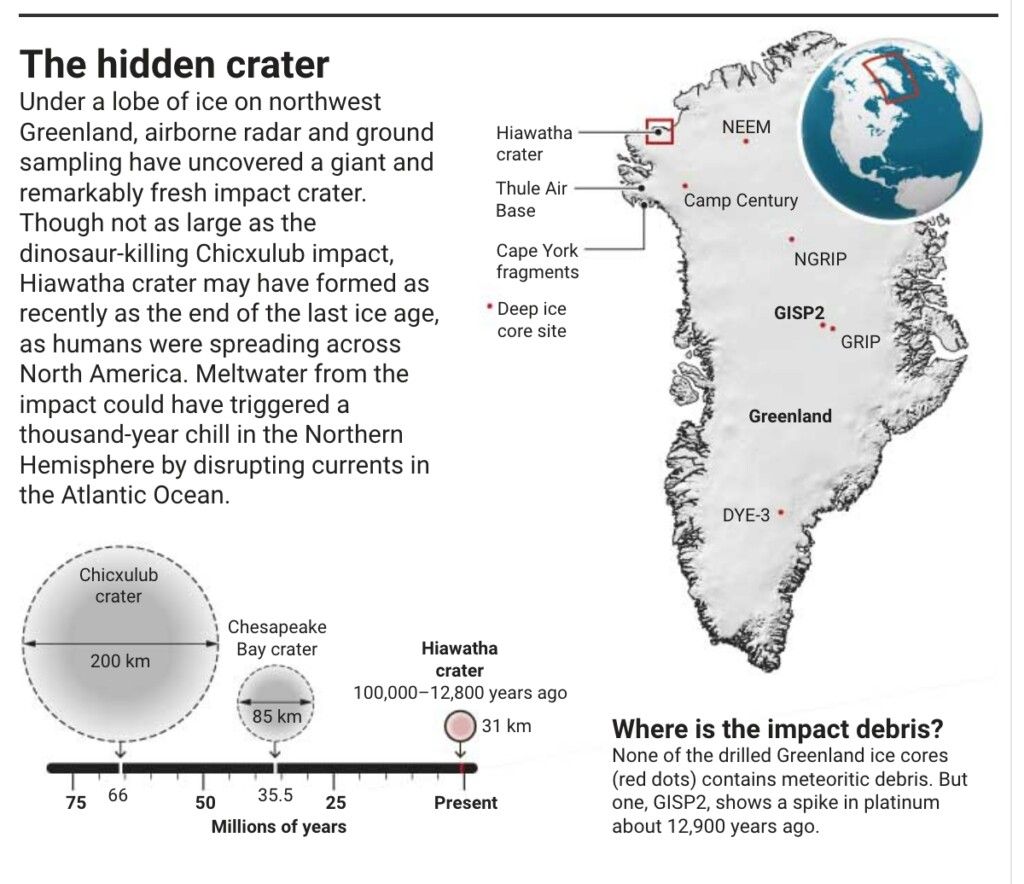 Stay tuned for this year's celebration of Apophis Day, when I observe the perils of space.  Asteroids!

When I promised my readers that in yesterday's NASA on returning to the Moon for Yuri's Night 2019, I had no idea what I would find.  What a little searching for videos about asteroid impacts posted since Apophis Day 2018 yielded was quite the surprise.  Science Magazine presents an overview of the discovery along with its implications in Massive crater under Greenland's ice points to climate-altering impact in the time of humans.

The 31-kilometer-wide Hiawatha crater may have formed as recently as 12,800 years ago when a 1.5-kilometer asteroid struck Earth.

NASA Goddard has more of the story behind the find as well as more details about the techniques used in Massive Crater Discovered Under Greenland Ice.

In a remote area of northwest Greenland, an international team of scientists has made a stunning discovery, buried beneath a kilometer of ice. It’s a meteor impact crater, 300 meters deep and bigger than Paris or the Beltway around Washington, DC. It is one of the 25 largest known impact craters on Earth, and the first found under any of our planet’s ice sheets. The researchers first spotted the crater in July 2015, while they were inspecting a new map of the topography beneath Greenland's ice sheet that used ice-penetrating radar data primarily from Operation IceBridge, an ongoing NASA airborne mission to track changes in polar ice, and earlier NASA airborne missions in Greenland.

I think this is quite the discovery, but it did not come as a complete surprise.  I wrote about the possibility six years ago in Hot (not): a cold blast from the past.


New data from Greenland ice cores suggest North America may have suffered a large cosmic impact about 12,900 years ago.

A layer of platinum is seen in ice of the same age as a known abrupt climate transition, US scientists report.

The climate flip has previously been linked to the demise of the North American "Clovis" people.

The data seem to back the idea that an impact tipped the climate into a colder phase, a point of current debate.

The tip back to a colder climate is not the issue.  In fact, it's a key point of "An Inconvenient Truth," which I'm showing to my Environmental Science class this week.  Here's the relevant question from the worksheet.


What is the likely effect of the melting of the Greenland ice cap on ocean circulation and global climate?

In the movie, the idea is that the release of meltwater from a large glacial lake diluted the Gulf Stream, causing the water to become less dense and unable to sink to the bottom of the ocean off Greenland, jamming up the global thermohaline circulation and sending the planet back into an ice age for another thousand years.  An analogous melt of water from the Greenland icecap, which is beginning to happen, would do much the same thing, slowing ocean circulation and cooling Europe.  Both of those are indeed taking place.

The effect of the proposed meteor impact would be that the explosion itself caused the flood and then added the cooling effects of all the dust from the impact on top of it.  That doesn't mean that the slowing of the Gulf Stream and cooling of the area around the North Atlantic isn't going to happen; it already is.  Instead, it means that the magnitude of the cooling that results won't be as big as happened 12,900 years ago.  That might actually be a good thing.

Another thing the impact would do would be to lessen the culpability of humans in the extinction of large mammals in North America and Europe at the time.  Humans definitely contributed, but a meteor impact would definitely shift some of the responsibility off of our ancestors.  It would also make the case for the deadliness of asteroid impacts, as if that wasn't already in the news.

It looks like the crater responsible for the layer of platinum may have been found.  Also, I just finished showing "An Inconvenient Truth" to my students this week.  What an interesting coincidence!

That's it for Apophis Day.  Stay tuned for the winners of the 2018 Coffee Party Entertainment Awards for movies.
Posted by Pinku-Sensei at 8:08 PM