Happy Arbor Day and Flashback Friday!  As I promised in yesterday's Student Sustainability Video Festival episode, today's retrospective is about the top posts about gun violence and gun control.  Since there were three most read entries in last year's top 40, I will update the topic with three videos.

I begin with the oldest, James Corden on Gun Control in America, which was broadcast less than a week after the school shooting in Parkland, Florida.

After 17 people were murdered in a mass shooting at Marjory Stoneman Douglas High School in Florida, James looks at measures other countries have taken to curb gun violence and wonders why Americans continue to refuse to make any changes.

Since two of the top posts are responses to this shooting, I thought it was only appropriate to include this video, which I missed the first time.

The debate over gun control often focuses on the United States, in part because the U.S. has more guns per capita than any country in the world. But what can other countries teach us about gun policy and whether gun laws actually work?

Harris's campaign promise serves as a good example of conservatives who said that Trump declaring a national emergency set a bad precedent.  I still agree even if I think Harris is right.

Follow over the jump for the top three entries about guns and gun control posted during March 21, 2018 to March 20, 2019 and how they earned their page views. 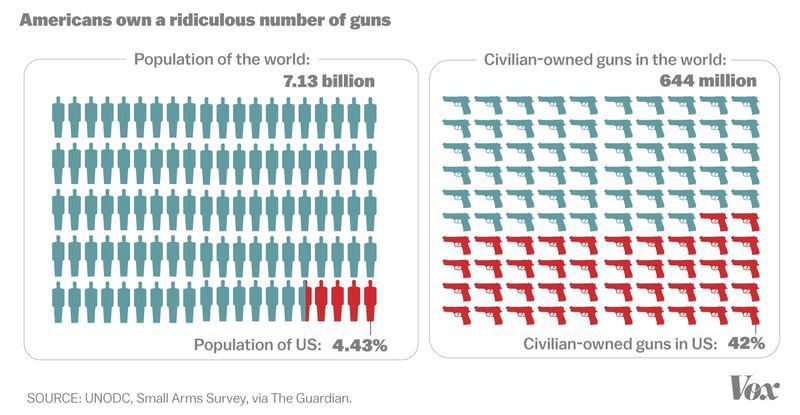 Music at March For Our Lives from March 28, 2018 was the next most read entry about gun violence during the eighth year of this blog.  It ended the blogging year with 2756 total raw page views and ranked 25th among all entries posted during the blogging year.  It had 104 raw page views before being shared at the Coffee Party USA Facebook page at 10:00 P.M on March 31, 2018.  It earned ~1700 page views in the first two hours and ~1900 page views in the first 24 hours after being shared.  The entry maxed out at 2610 default and 2662 raw page views on April 26, 2018 and ended April 2018 with 2536 default page views, placing it seventh for the month overall.  It was also crossposted to Booman Tribune.

Last year's retrospective on this subject, Update to 'Doctors to Congress: Fund gun violence research at the CDC and NIH,' the third most read entry of the seventh year of Crazy Eddie's Motie News from April 5, 2018, was the 30th most read entry overall and the 29th most read posted during the eighth year of this blog with 2490 total raw page views.  It earned ~1600 page views in the first two hours and ~2100 page views in the first 24 hours after being shared at the Coffee Party USA Facebook page at 10:00 P.M on April 5, 2018.  It ended April 2018 with 2377 default page views which ranked it eighth overall and third among entries posted during the month.

That's it for the most read entries of the previous blogging year about gun violence.  The next retrospective should be about Puerto Rican statehood for a Throwback Thursday.  Stay tuned.

Previous posts in this series
Previous retrospectives about gun violence.