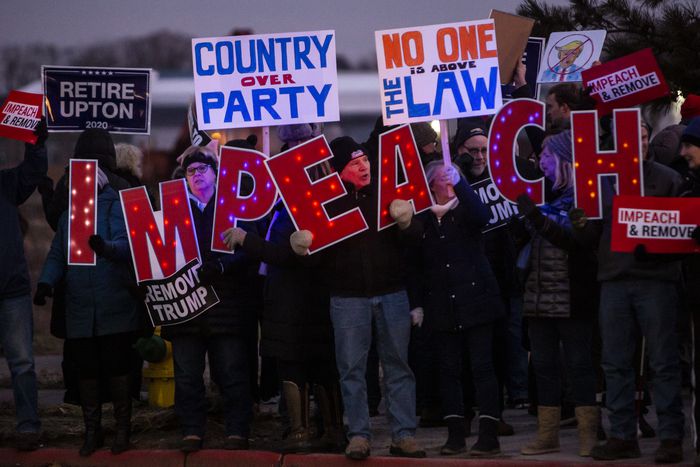 I told my readers to "stay tuned" as "I [would] post another entry about impeachment" at the end of It's Okay To Be Smart asks 'will we all eat bugs in the future?'  It's not about today's vote or comedians making fun of the event, although I'm sure I'll write about both soon, but about the public demonstrations both for and against impeachment that occurred last night across Michigan and the rest of the country.

I begin with WXYZ reporting President Trump supporters, protesters rally ahead of his visit.

Hundreds of supporters, as well as protesters, are attending rallies and speaking out across metro Detroit as President Donald Trump prepares to hold a rally in Western Michigan Wednesday.

The protest in Ferndale happened at the same location as the People's Climate March in 2017, so I know the area well.  I'm sure some of the same people were at both demonstrations.  I wasn't one of them.  While I support impeachment, I think the stress of doing so was one of the factors contributing to my diabetes.  Stress is one of the triggers of autoimmune diseases and type I diabetes is an autoimmune disorder, so I'm taking a breaking from stress as much as I can.

The same dynamic played out across the state.  Follow over the jump for videos from outside metro Detroit.

People gathered outside of Flint’s City Hall, some in support and others against the impeachment of President Donald Trump.

I'm pleased to see the pro-impeachment demonstration was larger.

The day before the U.S. House of Representatives is expected to vote on impeaching President Donald Trump, dozens of protesters gathered in Grand Rapids to encourage lawmakers to remove him from office.

Again, I'm glad the pro-impeachment crowd outnumbered the one Trump supporter who showed up.

Finally, MLive recorded most of the procession leading to the demonstration site in Trump impeachment rally draws 200 in Grand Rapids.

Protesters march during a President Donald J. Trump impeachment rally in downtown Grand Rapids on Tuesday, Dec. 17, 2019. The rally, at Veterans Memorial Park, was one of many held around Michigan.

I love the signs.  They're my favorite part of these demonstrations.
Posted by Pinku-Sensei at 1:11 PM