Ten of the companies that went out of business this decade and 9,300+ stores closed this year, two tales of the Retail Apocalypse 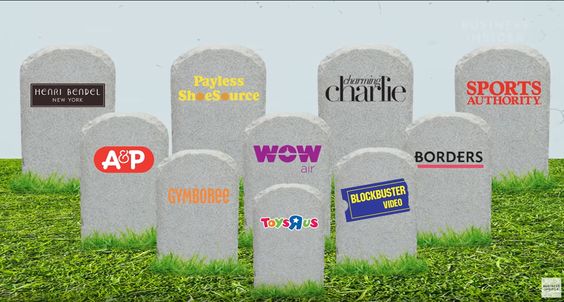 "Stay tuned for the year in the Retail Apocalypse, particularly the prediction that 12,000 stores could close in 2019."  That was the program note for today's entry that I used as the conclusion to YouTube rewinds 2019 plus WatchMojo ranks all the decade's rewinds.  As I also did for The top ten science stories of 2019 and the 2010s from Science Magazine and ASAPScience and Time Magazine and Yahoo! Finance look back at 2019 and the 2010s, I'm looking back at both the year and the decade.  In this case, the 2010s come first.  Watch Business Insider's 10 Companies We Lost In The Last Decade.

From 2010 to 2019, the retail apocalypse and changing tastes killed off many iconic companies. We lost Payless ShoeSource, Borders, Wow Air, and Toys R Us this decade.

While I didn't realize it at the time, the first Retail Apocalypse story I wrote about on this blog was the demise of Borders Books.  I thought it was like the bankruptcies of Jacobson's, whose space in Ann Arbor Borders occupied after Jacobson's moved out to Briarwood Mall, and Montgomery Ward's, which was the first anchor to abandon Northland Mall, the second Retail Apocalypse story I covered here.  Both of those were weak companies that went under during a recession, which is when I expect businesses would fail.  I thought much the same of Borders at the time, in addition to it being a personal loss.  In retrospect, the failure of Borders was much bigger than that and turned out to be a taste of things to come.

That's it for the decade in the Retail Apocalypse.  For the year, watch CBS DFW's Despite Strong Economy, 2019 Proved To Be Painful Year For Retailers.

The group Coresign Research reported more than 9,300 stores closed nationwide, which is a 59% jump from 2018.

Not all retail news last year was bad, as Sears and KMart having near-death experiences as both avoided liquidation, while RadioShack and Toys R Us showed signs of rising from the ashes after going out of business.  Still, I'm not optimistic about 2020, especially if the yield curve is correct about the next recession.  All of the above liquidations, bankruptcies, and store closures happened during an economic expansion, which is not when I expect a lot of business failures.  That's one of the reasons I find the trend alarming; it's counter-intuitive.  I expect it will become even worse when a recession hits.

That's it for the Retail Apocalypse for 2019.  Stay tuned for a New Year's Eve entry about the year in Google search, another of my traditions here.
Posted by Pinku-Sensei at 12:08 PM