Happy Festivus!  As I promised yesterday, it's time for an airing of grievances.  Watch Trump Melts Down at Rally After Getting Impeached: A Closer Look from Late Night with Seth Meyers.

Seth takes a closer look at Trump’s deranged rally after becoming the third president in history to be impeached and Republicans threatening to rig the Senate trial in his favor.

That's an impressive list of grievances CNN compiled.  One of them was about water-conserving toilets, for which I wrote "That's right down there with his complaints about toilets, something that I'll get to some other time" in Verge Science explains the science and controversy behind our lightbulbs.  Seth did a much better job of that than I could, so I'll count this entry as taking care of that promise.

Speaking of Seth doing a better job, I wrote "I thought his reading of Trump's letter and tweet was hilarious" and that "Seth has videos about both of them" in Meyers, Colbert, and Noah take closer looks at impeachment, the season 3 finale of 'The Worst Wing'.  Follow over the jump for those.

Trump didn't just rant on official White House stationery.  He also tweeted his outrage, which Seth covered in Trump Rants on Twitter During Historic Impeachment Vote the next night.

I'd like to think that venting in a letter, on Twitter, and at a rally would get all of Trump's grievances out of his system.  Unfortunately, I know better.  For Trump, it's always Festivus. 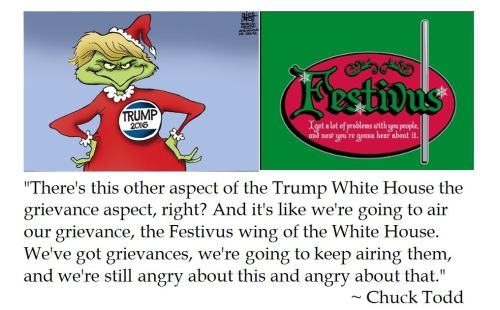 Enough of today's holiday.  Stay tuned for an entry about Hanukkah tomorrow, which begins at sunset tonight.
Posted by Pinku-Sensei at 4:41 PM